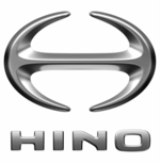 Overview
Hino Motors, Ltd. commonly known as simply Hino, is a manufacturer of diesel
Diesel engine
A diesel engine is an internal combustion engine that uses the heat of compression to initiate ignition to burn the fuel, which is injected into the combustion chamber...
truck
Truck
A truck or lorry is a motor vehicle designed to transport cargo. Trucks vary greatly in size, power, and configuration, with the smallest being mechanically similar to an automobile...
s, bus
Bus
A bus is a road vehicle designed to carry passengers. Buses can have a capacity as high as 300 passengers. The most common type of bus is the single-decker bus, with larger loads carried by double-decker buses and articulated buses, and smaller loads carried by midibuses and minibuses; coaches are...
es, and other vehicles, based in Hino
Hino, Tokyo
is a city located in central Tokyo Metropolis, Japan. As of 2010, the city has an estimated population of 182,092 and a population density of 6,610 persons per km². The total area was 27.53 km².-Geography:...
, Tokyo
Tokyo
, ; officially , is one of the 47 prefectures of Japan. Tokyo is the capital of Japan, the center of the Greater Tokyo Area, and the largest metropolitan area of Japan. It is the seat of the Japanese government and the Imperial Palace, and the home of the Japanese Imperial Family...
, Japan
Japan
Japan is an island nation in East Asia. Located in the Pacific Ocean, it lies to the east of the Sea of Japan, China, North Korea, South Korea and Russia, stretching from the Sea of Okhotsk in the north to the East China Sea and Taiwan in the south...
. Since 1973 the company has been the leading producer of medium and heavy-duty diesel trucks in Japan. It is a subsidiary of Toyota Motor Corporation
Toyota Motor Corporation
, , , commonly known simply as Toyota and abbreviated as TMC, is a multinational automaker headquartered in Toyota, Aichi, Japan. In 2010, Toyota Motor Corporation employed 317,734 people worldwide, and was the world's largest automobile manufacturer by production.The company was founded by...
.
The company traces its roots back to the founding of Tokyo Gas Industry Company in 1910. In 1910 Chiyoda Gas Co. was established and competed fiercely against incumbent Tokyo Gas Company fighting for gas lighting users.

I have a 2003 hino fb i recently had a flat tire after haveing it balanced i was told the rim was bent the rim is 175x6 stamped on the rim i have av...

Hay was wondering where to find out engin and specs for my 1994 Hino fb standered 150 hr four cyclinder deise.Also my injectors where and what kind to...
More
x