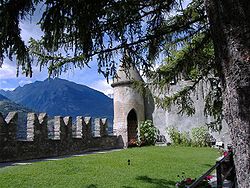 The word comes from the French language
French language
French is a Romance language spoken as a first language in France, the Romandy region in Switzerland, Wallonia and Brussels in Belgium, Monaco, the regions of Quebec and Acadia in Canada, and by various communities elsewhere. Second-language speakers of French are distributed throughout many parts...
, adapted from the Italian
Italian language
Italian is a Romance language spoken mainly in Europe: Italy, Switzerland, San Marino, Vatican City, by minorities in Malta, Monaco, Croatia, Slovenia, France, Libya, Eritrea, and Somalia, and by immigrant communities in the Americas and Australia...
merlone, possibly a shortened form of mergola, connected with Latin
Latin
Latin is an Italic language originally spoken in Latium and Ancient Rome. It, along with most European languages, is a descendant of the ancient Proto-Indo-European language. Although it is considered a dead language, a number of scholars and members of the Christian clergy speak it fluently, and...
mergae (pitchfork
Pitchfork
A pitchfork is an agricultural tool with a long handle and long, thin, widely separated pointed tines used to lift and pitch loose material, such as hay, leaves, grapes, dung or other agricultural materials. Pitchforks typically have two or three tines...
), or from a diminutive moerulus, from murus or moerus (a wall
Wall
A wall is a usually solid structure that defines and sometimes protects an area. Most commonly, a wall delineates a building and supports its superstructure, separates space in buildings into rooms, or protects or delineates a space in the open air...
). An alternative etymology
Etymology
Etymology is the study of the history of words, their origins, and how their form and meaning have changed over time.For languages with a long written history, etymologists make use of texts in these languages and texts about the languages to gather knowledge about how words were used during...
suggests that the medieval Latin merulus (mentioned from the end of the 10th century) functioned as a diminutive of Latin merle, expressing an image of blackbirds sitting on a wall.


As part of battlements

As an essential part of battlements, merlons were used in fortifications for millennia. The best-known examples appear on mediaeval buildings, where battlements were often used as much for decoration as for defensive purposes. The two most notable European variants in Middle Ages merlons shape were the Ghibelline and the Guelph
Guelphs and Ghibellines
The Guelphs and Ghibellines were factions supporting the Pope and the Holy Roman Emperor, respectively, in central and northern Italy. During the 12th and 13th centuries, the split between these two parties was a particularly important aspect of the internal policy of the Italian city-states...
merlon: the former ended in the upper part with a swallow-tailed form, while the latter term indicates the normal rectangular shape merlons (wimperg
Wimperg
A wimperg is a German and Dutch word for a Gothic ornamental gable with tracery over windows or portals, which were often accompanied with pinnacles. It was a typical element in Gothic Architecture especially in cathedral architecture. Wimpergs often had crockets or other decorative elements in the...
).

Other shapes include: three-pointed, quatrefoil
Quatrefoil
The word quatrefoil etymologically means "four leaves", and applies to general four-lobed shapes in various contexts.-In heraldry:In heraldic terminology, a quatrefoil is a representation of a flower with four petals, or a leaf with four leaflets . It is sometimes shown "slipped", i.e. with an...
, shielded, flower-like, rounded (typical of Islamic and African world), pyramidal, etc., depending either from the type of attacks expected or aesthetic considerations.

In Roman times, the merlons had a width sufficient to shelter a single man. As new weapons appeared in the Middle Ages (including crossbow
Crossbow
A crossbow is a weapon consisting of a bow mounted on a stock that shoots projectiles, often called bolts or quarrels. The medieval crossbow was called by many names, most of which derived from the word ballista, a torsion engine resembling a crossbow in appearance.Historically, crossbows played a...
s and the first firearms), the merlons were enlarged and provided with loop-holes of various dimensions and shapes, varying from simply rounded to cruciform. From the 13th century, the merlons could also be used to pivot wooden shutters: these added further protection for the defenders when they were not firing. The shutters (also known as "mantlets") could be opened by hand, or by using a pulley
Pulley
A pulley, also called a sheave or a drum, is a mechanism composed of a wheel on an axle or shaft that may have a groove between two flanges around its circumference. A rope, cable, belt, or chain usually runs over the wheel and inside the groove, if present...
.

After falling out of favour when the invention of cannon forced buildings to take a much lower profile, they re-emerged as decorative features in buildings constructed in the neo-Gothic style of the 19th century.
The source of this article is wikipedia, the free encyclopedia.  The text of this article is licensed under the GFDL.