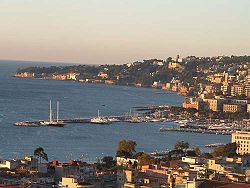 .
Mergellina is a section of the city of Naples
Naples
Naples is a city in Southern Italy, situated on the country's west coast by the Gulf of Naples. Lying between two notable volcanic regions, Mount Vesuvius and the Phlegraean Fields, it is the capital of the region of Campania and of the province of Naples...
in the Campania
Campania
Campania is a region in southern Italy. The region has a population of around 5.8 million people, making it the second-most-populous region of Italy; its total area of 13,590 km² makes it the most densely populated region in the country...
region of Italy
Italy
Italy , officially the Italian Republic languages]] under the European Charter for Regional or Minority Languages. In each of these, Italy's official name is as follows:;;;;;;;;), is a unitary parliamentary republic in South-Central Europe. To the north it borders France, Switzerland, Austria and...
. It is at the west end of the seaside road, via Caracciolo, one mile away from the main port of Naples.

Historically, it was a small fishing village and port and was quite distinct from Naples, itself. Expansion of Naples to the west under the Spaniards in the 17th century and subsequent development under the Bourbons and then by the national Italian government between 1880 and 1915 gradually led to the incorporation of Mergellina into greater metropolitan Naples. Today it is still a fishing port but also an important secondary tourist harbor for hydrofoil traffic to the islands in the bay of Naples and to various tourist destinations along the Campanian coast. The port also serves as mooring for private pleasure craft.

Mergellina was home to the poet Jacopo Sannazaro
Jacopo Sannazaro
Jacopo Sannazaro was an Italian poet, humanist and epigrammist from Naples.He wrote easily in Latin, in Italian and in Neapolitan, but is best remembered for his humanist classic Arcadia, a masterwork that illustrated the possibilities of poetical prose in Italian, and instituted the theme of...
, whose verses in Italian are part of the body of literature that helped form the Italian language
Italian language
Italian is a Romance language spoken mainly in Europe: Italy, Switzerland, San Marino, Vatican City, by minorities in Malta, Monaco, Croatia, Slovenia, France, Libya, Eritrea, and Somalia, and by immigrant communities in the Americas and Australia...
in the Middle Ages
Middle Ages
The Middle Ages is a periodization of European history from the 5th century to the 15th century. The Middle Ages follows the fall of the Western Roman Empire in 476 and precedes the Early Modern Era. It is the middle period of a three-period division of Western history: Classic, Medieval and Modern...
. His Latin works, primarily De partu Virginis, though little read today, earned him the nickname of "the Christian Virgil
Virgil
Publius Vergilius Maro, usually called Virgil or Vergil in English , was an ancient Roman poet of the Augustan period. He is known for three major works of Latin literature, the Eclogues , the Georgics, and the epic Aeneid...
". A main square, one block from the harbor, is named for him.

The port of Mergellina was during the 1960 Summer Olympics
1960 Summer Olympics
The 1960 Summer Olympics, officially known as the Games of the XVII Olympiad, was an international multi-sport event held from August 25 to September 11, 1960 in Rome, Italy...
used as Olympic harbor for the Finn
Finn (dinghy)
The Finn dinghy is the men's single-handed, cat-rigged Olympic class for sailing. It was designed by Swedish canoe designer, Rickard Sarby, in 1949 for the 1952 Summer Olympics in Helsinki...
(Sea Garden) and Flying Dutchman
Flying Dutchman (dinghy)
thumbthumbThe Flying Dutchman is a 20-foot one-design high-performance two-person monohull racing dinghy. Developed in the early 1950s, its large sail area per unit weight allow it to plane easily when sailing upwind. The boat utilizes a trapeze harness for the crew and hiking straps for the...
(Posillipo) sailboats.
The source of this article is wikipedia, the free encyclopedia.  The text of this article is licensed under the GFDL.