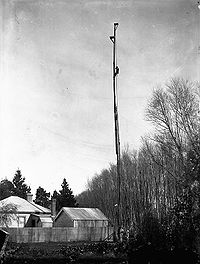 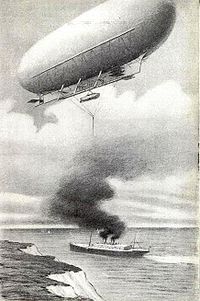 Chester Melvin Vaniman (1866-1912) was an American photographer, adventurer and businessman who specialized in panoramic
Panorama
A panorama is any wide-angle view or representation of a physical space, whether in painting, drawing, photography, film/video, or a three-dimensional model....
images taken from heights. Born to a farming family in Virden, Illinois
Virden, Illinois
Virden is a city in Macoupin and Sangamon counties in the U.S. state of Illinois. The population was 3,488 at the 2000 census, and 3,338 at a 2009 estimate....
, he was the eldest of four sons, and attended Valparaiso University
Valparaiso University
Valparaiso University, known colloquially as Valpo, is a regionally accredited private university located in the city of Valparaiso in the U.S. state of Indiana. Founded in 1859, it consists of five undergraduate colleges, a graduate school, a nursing school and a law school...
in Indiana
Indiana
Indiana is a US state, admitted to the United States as the 19th on December 11, 1816. It is located in the Midwestern United States and Great Lakes Region. With 6,483,802 residents, the state is ranked 15th in population and 16th in population density. Indiana is ranked 38th in land area and is...
and Chicago
Chicago
Chicago is the largest city in the US state of Illinois. With nearly 2.7 million residents, it is the most populous city in the Midwestern United States and the third most populous in the US, after New York City and Los Angeles...
. His nickname was the "Acrobatic Photographer." He shot images from hot air balloons, ships masts, tall buildings and even a home-made 30 meter pole. He was a famous aviator and balloonist. He scaled buildings, hung from self-made slings, and scaled dangerous heights to capture his unique images.

Vaniman's photographic career began in Hawaii in 1901 and ended some time in 1904. He spent over a year photographing Australia and New Zealand on behalf of the Oceanic Steamship Company, creating promotional images for the company. During this time the New Zealand Government also commissioned some panoramic images. Beginning in 1903 he spent over a year photographing Sydney
Sydney
Sydney is the most populous city in Australia and the state capital of New South Wales. Sydney is located on Australia's south-east coast of the Tasman Sea. As of June 2010, the greater metropolitan area had an approximate population of 4.6 million people...
and the surrounding areas. It was during this time that he created his best known work, the panorama of Sydney, shot from a hot air balloon
Hot air balloon
The hot air balloon is the oldest successful human-carrying flight technology. It is in a class of aircraft known as balloon aircraft. On November 21, 1783, in Paris, France, the first untethered manned flight was made by Jean-François Pilâtre de Rozier and François Laurent d'Arlandes in a hot air...
he had specially imported from the United States.

He constructed his own "swing-lens" cameras to accomplish the capture of full 360×180 degree panoramic images.

Vaniman is best known for his images of Hawaii
Hawaii
Hawaii is the newest of the 50 U.S. states , and is the only U.S. state made up entirely of islands. It is the northernmost island group in Polynesia, occupying most of an archipelago in the central Pacific Ocean, southwest of the continental United States, southeast of Japan, and northeast of...
, Australia
Australia
Australia , officially the Commonwealth of Australia, is a country in the Southern Hemisphere comprising the mainland of the Australian continent, the island of Tasmania, and numerous smaller islands in the Indian and Pacific Oceans. It is the world's sixth-largest country by total area...
, and New Zealand
New Zealand
New Zealand is an island country in the south-western Pacific Ocean comprising two main landmasses and numerous smaller islands. The country is situated some east of Australia across the Tasman Sea, and roughly south of the Pacific island nations of New Caledonia, Fiji, and Tonga...
.

Some time around 1904 he gave up photography
Photography
Photography is the art, science and practice of creating durable images by recording light or other electromagnetic radiation, either electronically by means of an image sensor or chemically by means of a light-sensitive material such as photographic film...
and took up exploration
Exploration
Exploration is the act of searching or traveling around a terrain for the purpose of discovery of resources or information. Exploration occurs in all non-sessile animal species, including humans...
. This included attempts at the North Pole
North Pole
The North Pole, also known as the Geographic North Pole or Terrestrial North Pole, is, subject to the caveats explained below, defined as the point in the northern hemisphere where the Earth's axis of rotation meets its surface...
and the Trans-Atlantic crossing - both attempted in Walter Wellman
Walter Wellman
Walter Wellman was an American journalist, explorer, and aëronaut, born at Mentor, Ohio, and educated in the public schools.- Biographical background :...
's airship America
America (airship)
The America was a non-rigid airship built by Mutin Godard in France in 1906 for Walter Wellman's attempt to reach the North Pole by air. Wellman had been inspired to fly to the pole during a failed overland attempt in 1893. When he saw a French dirigible at the Portsmouth Peace Conference in 1905,...
. At the first attempt to cross the Atlantic in 1910 they anticipated a five day crossing but the airship's motor failed after 38 hours leaving it adrift until it was rescued two days later by the Trent, a passing Royal Mail steamship.

Vaniman lost his life during his second attempt at a trans-Atlantic airship crossing when his airship, the Akron, exploded off the New Jersey shore on July 2, 1912. Filled with 11,300 cubic meters of Hydrogen
Hydrogen
Hydrogen is the chemical element with atomic number 1. It is represented by the symbol H. With an average atomic weight of , hydrogen is the lightest and most abundant chemical element, constituting roughly 75% of the Universe's chemical elemental mass. Stars in the main sequence are mainly...
gas, his was the first American airship that could compare to the better known European manufactured models. Vaniman and his crew of four were killed when the airship exploded in front of the gathered crowd near Atlantic City, and gondola plunged 750 meters into an inlet. Subsequent investigation indicated that internal pressure had split the bag.