Encyclopedia
Mechanized agriculture is the process of using agricultural machinery
Agricultural machinery
Agricultural machinery is machinery used in the operation of an agricultural area or farm.-Hand tools:The first person to turn from the hunting and gathering lifestyle to farming probably did so by using his bare hands, and perhaps some sticks or stones. Tools such as knives, scythes, and wooden...
to mechanize
Mechanization
Mechanization or mechanisation is providing human operators with machinery that assists them with the muscular requirements of work or displaces muscular work. In some fields, mechanization includes the use of hand tools...
the work of agriculture
Agriculture
Agriculture is the cultivation of animals, plants, fungi and other life forms for food, fiber, and other products used to sustain life. Agriculture was the key implement in the rise of sedentary human civilization, whereby farming of domesticated species created food surpluses that nurtured the...
, massively increasing farm output and farm worker productivity
Productivity
Productivity is a measure of the efficiency of production. Productivity is a ratio of what is produced to what is required to produce it. Usually this ratio is in the form of an average, expressing the total output divided by the total input...
. In modern times, powered machinery has replaced many jobs formerly carried out by men or animals such as oxen, horse
Horse
The horse is one of two extant subspecies of Equus ferus, or the wild horse. It is a single-hooved mammal belonging to the taxonomic family Equidae. The horse has evolved over the past 45 to 55 million years from a small multi-toed creature into the large, single-toed animal of today...
s and mule
Mule
A mule is the offspring of a male donkey and a female horse. Horses and donkeys are different species, with different numbers of chromosomes. Of the two F1 hybrids between these two species, a mule is easier to obtain than a hinny...
s.

The history of agriculture
History of agriculture
Agriculture was developed at least 10,000 years ago, and it has undergone significant developments since the time of the earliest cultivation. The Fertile Crescent of Western Asia, Egypt, and India were sites of the earliest planned sowing and harvesting of plants that had previously been gathered...
contains many examples of tool use, but only in recent time has the high rate of machine use been at such a level.

The first pervasive mechanization of agriculture came with the introduction of the plough
Plough
The plough or plow is a tool used in farming for initial cultivation of soil in preparation for sowing seed or planting. It has been a basic instrument for most of recorded history, and represents one of the major advances in agriculture...
, usually powered by animals. It was invented in ancient Mesopotamia.

Current mechanized agriculture includes the use of Tractors, trucks, combine harvesters, airplanes (crop dusters), helicopters, and other vehicles. Modern farms even sometimes use computers in conjunction with satellite imagery
Satellite imagery
Satellite imagery consists of photographs of Earth or other planets made by means of artificial satellites.- History :The first images from space were taken on sub-orbital flights. The U.S-launched V-2 flight on October 24, 1946 took one image every 1.5 seconds...
and GPS guidance to increase yields.

Mechanization was one of the factors responsible for urbanization and industrial economies. Besides improving production efficiency, mechanization encourages large scale production and improves the quality of farm produce. On the other hand, it displaces unskilled farm labor, causes environmental pollution, deforestation and erosion. 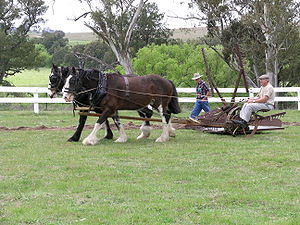 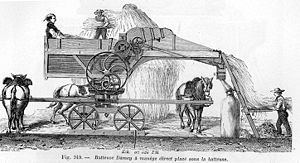 Since the beginning of agriculture threshing was done by hand with a flail
Flail
A flail is an agricultural implement for threshing.Several tools operate similarly to the agricultural implement and are also called flails:...
, requiring a great deal of labor. The threshing machine
Threshing machine
The thrashing machine, or, in modern spelling, threshing machine , was a machine first invented by Scottish mechanical engineer Andrew Meikle for use in agriculture. It was invented for the separation of grain from stalks and husks. For thousands of years, grain was separated by hand with flails,...
, which was invented in 1794 but not widely used for several more decades, simplified the operation and allowed the use of animal power.

Before the invention of the grain cradle
Cradle (grain)
A cradle is an agricultural tool, a form of the scythe, used to reap grain. It is a scythe with an arrangement of fingers attached to the snath, snathe or snaith , such that the cut grain falls upon the fingers and can be cleanly laid down in a row for collection.-History:As agriculture A cradle...
(ca. 1790) an able bodied laborer could reap about one quarter acre of wheat in a day using a sickle. It was estimated that for each of Cyrus McCormick's horse pulled reapers (ca. 1830s) freed up five men for military service in the U.S. Civil War. Later innovations included raking and binding machines. By 1890 two men and two horses could cut, rake and bind 20 acres of wheat per day.

In the 1880s the reaper and threshing machine were combined into the combine harvester
Combine harvester
The combine harvester, or simply combine, is a machine that harvests grain crops. The name derives from the fact that it combines three separate operations, reaping, threshing, and winnowing, into a single process. Among the crops harvested with a combine are wheat, oats, rye, barley, corn ,...
. These machines required large teams of horses or mules to pull.

Steam power was applied to threshing machines in the late 19th century. There were steam engines that moved around on wheels under their own power for supplying temporary power to stationary threshing machines. These were called road engines, and Henry Ford seeing one as a boy was inspired to build an automobile.

With internal combustion came the first modern tractors in the early 1900s, becoming more popular after the Fordson tractor
Fordson tractor
Fordson was a brand name used on a range of mass produced general-purpose tractors manufactured by Henry Ford & Son, Inc, from 1917 until 1920 when it was merged into the Ford Motor Company, which used the name until 1964...
(ca. 1917). At first reapers and combine harvesters were pulled by tractors, but in the 1930s self powered combines were developed. (Link to a chapter on agricultural mechanization in the 20th Century at reference)

The horse population in the U.S. began to decline in the 1920s after the conversion of agriculture and transportation to internal combustion. Peak tractor sales in the U.S. were around 1950. In addition to saving labor, this freed up much land previously used for supporting draft animals.

The greatest period of growth in agricultural productivity in the U.S. was from the 1940s to the 1970s, during which time agriculture was benefiting from internal combustion powered tractors and harvesting machines, chemical fertilizers and the green revolution.