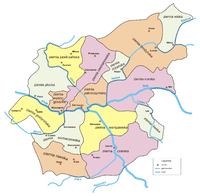 Mazovia or Masovia is a geographical, historical and cultural region in east-central Poland
Poland
Poland , officially the Republic of Poland , is a country in Central Europe bordered by Germany to the west; the Czech Republic and Slovakia to the south; Ukraine, Belarus and Lithuania to the east; and the Baltic Sea and Kaliningrad Oblast, a Russian exclave, to the north...
. It is also a voivodeship
Voivodeship
Voivodship is a term denoting the position of, or more commonly the area administered by, a voivod. Voivodeships have existed since medieval times in Poland, Romania, Hungary, Lithuania, Latvia, Russia and Serbia....
(an administrative region) in Poland.

Its historic capital is Płock, which was the medieval residence of first Dukes of Masovia. Different capitals of individual former duchies of Mazovia also include Czersk
Czersk, Masovian Voivodeship
Czersk is a settlement in the administrative district of Gmina Góra Kalwaria, within Piaseczno County, Masovian Voivodeship, in east-central Poland. It lies approximately south-east of Góra Kalwaria, south-east of Piaseczno, and south-east of Warsaw....
and later Warsaw
Warsaw
Warsaw is the capital and largest city of Poland. It is located on the Vistula River, roughly from the Baltic Sea and from the Carpathian Mountains. Its population in 2010 was estimated at 1,716,855 residents with a greater metropolitan area of 2,631,902 residents, making Warsaw the 10th most...
.

The main rivers are the Vistula (Wisła), Bug
Bug
A bug is an insect of the order Hemiptera, known as the "true bugs".Bug or BUG may also refer to:-Biology:* Informally, most arthropods, except marine crustaceans, including individuals or species of** centipede** insect** millipede** mite...
, Narew, Pilica
Pilica
Pilica is a river in central Poland, the longest left tributary of the Vistula river, with a length of 319 kilometres and the basin area of 9,273 km2 .-Towns:*Szczekociny*Koniecpol*Przedbórz*Sulejów*Tomaszów Mazowiecki...
, and Wkra
Wkra
Wkra is a river in north-eastern Poland, a tributary of the Narew river, with a length of 249 kilometres and the basin area of 5,322 km². .Towns and townships:* Bieżuń* Radzanów* Strzegowo* Glinojeck* Sochocin...
. Forests (mainly coniferous) cover one-fifth of the province. The climate is characterized by warm summers and cool winters. Average annual precipitation is 20–24 inches (500–600 mm). Two-thirds of the province’s residents live in cities, with Warsaw being the centre of the largest conurbation in Poland. Other large cities include Radom, Płock, Siedlce
Siedlce
Siedlce ) is a city in eastern Poland with 77,392 inhabitants . Situated in the Masovian Voivodeship , previously the city was the capital of a separate Siedlce Voivodeship ....
, Ostrołęka, and Pruszków
Pruszków
Pruszków is a town in central Poland, situated in the Masovian Voivodeship since 1999. It was previously in Warszawa Voivodeship . Pruszków is the capital of Pruszków County, located along the western edge of the Warsaw urban area...
. 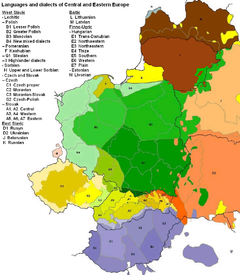 The historic region of Mazovia (Mazowsze) was situated astride the middle course of the Vistula River. The historical capital of Mazovia is Płock, being the oldest town this region. It received its town rights in 1237. It is the former residence of the Mazovian princes. It is the oldest legislated seat diocese
Diocese
A diocese is the district or see under the supervision of a bishop. It is divided into parishes.An archdiocese is more significant than a diocese. An archdiocese is presided over by an archbishop whose see may have or had importance due to size or historical significance...
of Mazovia, established in 1075. The Płock Cathedral was built in the first half of the XII century, in which the royal chapel is situated together with the sarcophagus of Polish monarchs. The cathedral in Płock is one of five oldest Polish cathedrals. Between 1079 – 1138 Płock was the capital of Poland. He performed this function in times Polish monarchs: Władysław I Herman and Bolesław III Krzywousty. In the period of the rule of the first monarchs of Piast
Piast dynasty
The Piast dynasty was the first historical ruling dynasty of Poland. It began with the semi-legendary Piast Kołodziej . The first historical ruler was Duke Mieszko I . The Piasts' royal rule in Poland ended in 1370 with the death of king Casimir the Great...
State, like also before Baptism of Poland
Baptism of Poland
The Baptism of Poland was the event in 966 that signified the beginning of the Christianization of Poland, commencing with the baptism of Mieszko I, who was the first ruler of the Polish state. The next significant step in Poland's adoption of Christianity was the establishment of various...
- 966 year, in the X century Płock as the capital castle were one of monarchal seats, among others of prince Mieszko I and of king Bolesław I Chrobry, which on the Płock Tumskie Hill raised one's palatium. However in years: 1037-1047 Płock was capital of the independent, Mazovian state of Masław.

During the 9th century it was inhabited by the Mazovian tribe, and it was incorporated into the Polish state in the 10th century under the Piast ruler Mieszko I. In 1047, following a period of upheaval, it was reannexed to Poland by Casimir I. In 1138 the duchy of Mazovia was established, and during the 12th and 13th centuries it endured Prussian, Jatvingian, and Rus invasions. To protect its northern section Conrad of Mazovia called in the Teutonic Knights in 1229 and granted them the Chełmno Land. After the reunification of the Polish state by Władysław I in the early 14th century, Mazovia retained independent status. In 1529 Sigismund I incorporated Mazovia (with its main stronghold in Warsaw) into the Polish state.

During the 15th and 16th centuries the region began exporting grain, timber, and fur. The Polish-Lithuanian Union of Lublin (1569) established Mazovia as the central region of the Polish-Lithuanian Commonwealth, with Warsaw rising to prominence as the seat of the state legislature. In 1596 King Sigismund III Vasa moved the Polish capital from Kraków to Warsaw. During the 17th and 18th centuries Swedish, Transylvanian, Saxon, and Russian invasions wreaked havoc on the region. With the last of the Partitions of Poland (1795), the northern and western sections of the area became part of Prussia, with the remaining portion annexed to Austria. In 1815 the region was incorporated into the Congress Kingdom of Poland, which was dependent on Russia. In the mid-19th century Mazovia was the site of Polish rebellions against Russian rule. The latter part of the 19th century saw rapid development of agriculture, the food, metal, and textile industries, and railway transport. At that time the Warsaw Industrial District was exporting the majority of its products to Russia. Under the German occupation of Warsaw during World War II, the city’s population decreased sharply as a result of executions, the extermination of the city’s Jews, the deaths of some 200,000 inhabitants during the Warsaw Uprising of 1944, and the deportation of the city’s left-bank population following the uprising. Shortly after the uprising, German Chancellor Adolf Hitler ordered Nazi troops to destroy the city. The rebuilding of the Polish capital was the main task of the postwar period.

At the turn of the 21st century, Masovian Voivodeship ranked first among Poland’s provinces in total value of industrial output and in amount of investments made by foreign sources. Warsaw is the financial capital of Poland and Central Europe.

Kampinos National Park
Kampinos National Park
Kampinos National Park is a National Park in east-central Poland, in Masovian Voivodeship, on the north-west outskirts of Warsaw. It has a sister park agreement with Indiana Dunes National Lakeshore, Indiana, United States....
is one of Poland’s largest national parks and is popular with tourists making day trips from Warsaw to hike among the park’s primeval forests, sand dunes, and marshland. The main cultural centre of the province, and, alongside Kraków
Kraków
Kraków also Krakow, or Cracow , is the second largest and one of the oldest cities in Poland. Situated on the Vistula River in the Lesser Poland region, the city dates back to the 7th century. Kraków has traditionally been one of the leading centres of Polish academic, cultural, and artistic life...
, in all of Poland, is Warsaw, which is home to dozens of theatres, the National Philharmonic, the National Opera House, the National Library, and the National Museum. Warsaw has many magnificent historic buildings and monuments, including those in the Old Town (founded at the turn of the 14th century) and the New Town (begun in the 15th century), both of which were almost completely demolished during World War II but were meticulously restored and were designated UNESCO World Heritage sites in 1980. Historical monuments elsewhere include the manor house in Żelazowa Wola
Zelazowa Wola
Żelazowa Wola is a village in Gmina Sochaczew, Sochaczew County, Masovian Voivodeship, in east-central Poland. It lies on the Utrata River, some northeast of Sochaczew and west of Warsaw. Żelazowa Wola has a population of 65....
where composer Frédéric Chopin
Frédéric Chopin
Frédéric François Chopin was a Polish composer and virtuoso pianist. He is considered one of the great masters of Romantic music and has been called "the poet of the piano"....
was born and that today contains the Chopin Museum. Płock, once the seat of the Mazovian and Płock princes from the 12th to the 15th century, is noted for its Renaissance cathedral.

There is no specific regional cuisine of Mazovia. Formerly, dairy foods dominated the peasant cuisine. Nobles used poultry, geese, chickens, ducks. Most separate Mazovian culinary region's is Kurpie
Kurpie
Kurpie is one of a number of ethnic regions in Poland, noted for its unique traditional customs, such as its own types of traditional costume, traditional dance, and distinctive type of architecture and livelihoods...
and Łowicz, where traditional dishes have survived until to the present day. In Kurpie traditional dishes are prepared with ingredients collected in the forest: berries, honey and mushrooms. There are several dishes traditional Polish dishes
Polish cuisine
Polish cuisine is a style of cooking and food preparation originating from Poland. It has evolved over the centuries due to historical circumstances. Polish national cuisine shares some similarities with other Central European and Eastern European traditions as well as French and Italian...
, e.g. flaki
Flaki
Flaki or Flaczki is a traditional Polish meat stew. It can be an acquired taste, but is one of the many soups that are an important part of the Polish diet...
, kluski
Kluski
Kluski is a generic Polish name for all kinds of dumplings without a filling, though at times the word also refers to all varieties of noodles as well. It is usually made of chunks of boiled dough. There are several varieties of kluski, depending mostly on the dough...
, which are prepared in different way than in other parts of Poland.