Encyclopedia
Kurpie (ˈkurpjɛ) is one of a number of ethnic regions in Poland
Poland
Poland , officially the Republic of Poland , is a country in Central Europe bordered by Germany to the west; the Czech Republic and Slovakia to the south; Ukraine, Belarus and Lithuania to the east; and the Baltic Sea and Kaliningrad Oblast, a Russian exclave, to the north...
, noted for its unique traditional customs, such as its own types of traditional costume, traditional dance, and distinctive type of architecture and livelihoods. Kurpie is also the name of the people of this culture.

The Kurpie region is located in Poland on a lowland plain called the Mazovian Region
Mazovia
Mazovia or Masovia is a geographical, historical and cultural region in east-central Poland. It is also a voivodeship in Poland.Its historic capital is Płock, which was the medieval residence of first Dukes of Masovia...
(Mazowsze), which was once covered over by two forests known as the Puszcza Zielona
Puszcza Zielona
Puszcza Zielona is a forest in Poland which extends from the Narew River and the border of what was once East Prussia. It is bounded on the east by the Pisa River and on the west by the Orzyc River...
(the Green Wilderness) and the Puszcza Biała (the White Wilderness).

The Green Wilderness (Puszcza Zielona) is usually associated with the White Wilderness (Puszcza Biała), and together the two forests are often referred to as the Kurpie Forest (Puszcza Kurpiowska
Puszcza Kurpiowska
Puszcza Kurpiowska or Kurpiowska Forest, is the collective name of Poland's two wilderness areas: Puszcza Biała and Puszcza Zielona , located in the central basin of Narew and Kurpiowska Plain. It is bound by the rivers: Pisa , Narew and Orzyc . The north-end reaches the former border with East...
) because the two forests were populated by inhabitants who, over the centuries of isolation, developed a unique culture of their own, called Kurpie.

On today’s map, the Kurpie region comprises Mazovia, Podlasie and, to a small extent, the Warmia
Warmia
Warmia or Ermland is a region between Pomerelia and Masuria in northeastern Poland. Together with Masuria, it forms the Warmian-Masurian Voivodeship....
and Mazury region. Populated areas in Kurpie today are generally in the towns of Myszyniec
Myszyniec
Myszyniec is a town in Ostrołęka County, Masovian Voivodeship, Poland, with 3,032 inhabitants ....
and Ostrołęka and the villages of Czarnia
Czarnia
Czarnia is a fictional planet, the homeworld of DC Comics character Lobo before he wiped out the entire planet's race. The last Czarnian can be seen in series Lobo The Last Czarnian by Simon Bisley and Keith Giffen. Czarnia no longer exists in the DC universe.-Civilization:Contrary to the...
, Dylewo, Jednorożec
Jednorozec
Jednorożec is a large village in central Poland, in Przasnysz County. Located in the Mazovian Voivodeship, the town is one of the centres of the historical region of Kurpie...
, Kadzidło, Lipniki, Łyse and Zbójna
Zbójna
Zbójna is a village in Łomża County, Podlaskie Voivodeship, in north-eastern Poland. It is the seat of the gmina called Gmina Zbójna. It lies approximately north-west of Łomża and west of the regional capital Białystok....
.

The people from this region were originally called people of the wilderness (puszczaki). However, these puszczaki made their shoes from fiber from the linden tree, and these shoes, called kurpś, became a name for outsiders to use to describe the inhabitants of the region.

The first people who settled there found the heavily forested area to be sandy and muddy. Bee-keeping, producing pitch
Pitch (resin)
Pitch is the name for any of a number of viscoelastic, solid polymers. Pitch can be made from petroleum products or plants. Petroleum-derived pitch is also called bitumen. Pitch produced from plants is also known as resin. Products made from plant resin are also known as rosin.Pitch was...
, and iron smelting
Smelting
Smelting is a form of extractive metallurgy; its main use is to produce a metal from its ore. This includes iron extraction from iron ore, and copper extraction and other base metals from their ores...
were the principal commercial occupations with bee-keeping highly regulated; however, families also hunted and fished, gathered mushrooms, collected fruits and nuts, and generally used the forests to provide them with their daily needs.

At home, amber
Amber
Amber is fossilized tree resin , which has been appreciated for its color and natural beauty since Neolithic times. Amber is used as an ingredient in perfumes, as a healing agent in folk medicine, and as jewelry. There are five classes of amber, defined on the basis of their chemical constituents...
was polished, and men used forest material to create wood products. The women became very accomplished in weaving linens and cloths.

Until the middle of the 19th century the Kurpie forests remained generally pristine. Soon afterwards, however, forested areas were cleared to allow farming, which, because of the poor soil, was found to be marginal. Cattle breeding was also introduced at this time.

The Kurpie region was part of Poland from the beginning of Polish history in the 10th century.

Because of their isolation, Kurpie folks—who were neither serfs nor nobles but reported directly to the king—took on a unique culture all their own.

Kurpie homes were made out of wood and covered with straw, with a cross or flag mounted on the roof. The interior of the house was sparse, and the floor was wood. Windows in a Kurpie home always contained six panes of glass. Shutters and doors were painted. In 1927, Adam Chetnik
Adam Chętnik
Adam Chętnik was a Polish ethnographer who studied the Kurpie. He is the author of several books on the Kurpie residing in Puszcza Zielona. In 1927 he founded Skansen Kurpiowski in Nowogród, an open air museum dedicated to Kurpie culture. He published over 100 scholarly works...
established an open air museum in Nowogród
Nowogród
Nowogród is a small town in northeastern Poland located about 13 km away from the city of Łomża, in Łomża County, in Podlaskie Voivodeship, with 1,998 inhabitants . It is centered on the area known as Skansen Kurpiowski which is an open air museum dedicated to Kurpie culture and a popular...
which showcases traditional Kurpie homes and other elements of their culture.

Although their costumes were similar, Kurpies in the north had one type of costume and Kurpies in the southern part of the region had another. For example in the north, women wore red skirts with a green vest over a white linen blouse with some trim and always a necklace made of amber. Women in the south wore green skirts and employed more elaborate embroidery and needlework in their costume.

There is some variation in the costume. For example, a man’s trousers could be grey or white, and women might wear a red or a white blouse.

Kurpie, like other Polish regions, has its own traditional dances, such as the “horse” (konik) where dancing men mimic a horse and rider.

During this season, Kurpies delighted in making tall Easter Sunday palms out of small trees and decorating them with flowers and other ornaments in order to protect their houses from ghosts. 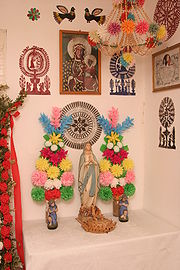 Kurpie women were famous for their beautifully decorated Easter eggs, and cookies made in the shape of the Easter lamb.

Kurpie women have always been famous for their paper cut-outs (wycinanki) of animals, geometric designs, flowers, and so on.

This custom was characterized by people sprinkling water over each other in celebration. The intent was to show your affection for the person being sprinkled, and therefore men generally took the lead in sprinkling women.

A celebration which is still popular today is a religious procession to various altars, with participants wearing their traditional costumes. The leaders of the procession bless the Kurpie lands as they proceed.

In August Kurpies collected grain and flowers and took them to church to be blessed.

On the 6th of December a celebration was held praising the good fortune that the cattle had not been eaten by the wolves. However, wolves have long since disappeared from Kurpie.

An embossed wafer (opłatek), featuring a religious scene, was shared with family members and with the cattle. Women placed hay under the table and children wandered the streets and sang Christmas carols in return for treats.

The traditional Kurpie Kadzidlańskie Wedding is well known throughout Poland and includes dances, songs, chants and wedding ceremonies based on ancient wedding rituals.

The music of Kurpie is very different from that of its neighbors. Over one thousand original Kurpie songs were recorded by the Polish priest, Władyslaw Skierkowski, in his book “Puszcza Kurpiowska w pieśni”. In Henryk M. Górecki
Henryk Górecki
Henryk Mikołaj Górecki was a composer of contemporary classical music. He studied at the State Higher School of Music in Katowice between 1955 and 1960. In 1968, he joined the faculty and rose to provost before resigning in 1979. Górecki became a leading figure of the Polish avant-garde during...
‘s third symphony, titled “Symphony of Sorrowful Songs
Symphony No. 3 (Górecki)
The Symphony No. 3, Op. 36, also known as the Symphony of Sorrowful Songs , is a symphony in three movements composed by Henryk Górecki in Katowice, Poland, between October and December 1976. The work is indicative of the transition between Górecki's dissonant earlier manner and his more tonal...
”, the first part of the symphony was inspired by Kurpie music.

From the days of forest living to the days of marginal farming, Kurpie today is vastly different than its traditional past. Since the end of World War II
World War II
World War II, or the Second World War , was a global conflict lasting from 1939 to 1945, involving most of the world's nations—including all of the great powers—eventually forming two opposing military alliances: the Allies and the Axis...
, education, migration, improved methods of farming, improvement of commerce, and infrastructure growth have brought Kurpie into the modern age.

A vivid account of the Kurpie region and its people during the 17th century Swedish invasion can be found in the beginning of Chapter 55 of Henryk Sienkiewicz
Henryk Sienkiewicz
Henryk Adam Aleksander Pius Sienkiewicz was a Polish journalist and Nobel Prize-winning novelist. A Polish szlachcic of the Oszyk coat of arms, he was one of the most popular Polish writers at the turn of the 19th and 20th centuries, and received the Nobel Prize in Literature in 1905 for his...
’s “The Deluge.” A brief account of the Kurpie peasant attack on the Swedish army may be found in Chapter 111 (page 554 of volume two).
Sienkiewicz dramatically describes the personal characteristics and activity of the Kurpie people in Chapters XX and XXI of his historical novel "The Teutonic Knights
The Teutonic Knights (novel)
The Knights of the Cross or The Teutonic Knights is a 1900 historical novel written by the eminent Polish Modernist writer and the 1905 Nobel laureate, Henryk Sienkiewicz...
”: