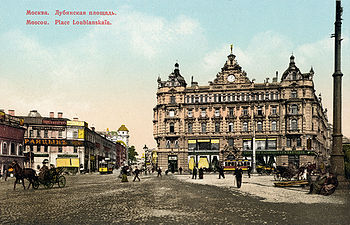 Lubyanka Square in Moscow
Moscow
Moscow is the capital, the most populous city, and the most populous federal subject of Russia. The city is a major political, economic, cultural, scientific, religious, financial, educational, and transportation centre of Russia and the continent...
is about 900 metres (984.3 yd) north east of Red Square
Red Square
Red Square is a city square in Moscow, Russia. The square separates the Kremlin, the former royal citadel and currently the official residence of the President of Russia, from a historic merchant quarter known as Kitai-gorod...
. The name is first mentioned in 1480, when Ivan III settled many Novgorodians in the area. They built the church of St Sophia, modelled after St Sophia Cathedral in Novgorod, and called the area Lubyanka
Lubyanka
Lubyanka or Lubianka may refer to:*Lubyanka Square, Moscow*Bolshaya Lubyanka Street, Moscow*Lubyanka Building, former KGB headquarters and prison at Lubyanka Square, Moscow*Lubyanka , a metro station in MoscowPlaces in Poland called Lubianka...
after the Lubyanitsy district of their native city.

Lubyanka Square is best known for Aleksandr V. Ivanov's monumental building from 1897–1898. It was originally used by the insurance company Rossiya, but it is better known for later housing the headquarters of the KGB
Lubyanka (KGB)
The Lubyanka is the popular name for the headquarters of the KGB and affiliated prison on Lubyanka Square in Moscow. It is a large building with a facade of yellow brick, designed by Alexander V...
in its various incarnations and today housing that of the FSB. The square was renamed Dzerzhinsky Square for many years (1926–1990) in honor of the founder of the Soviet security service, Felix Dzerzhinsky
Felix Edmundovich Dzerzhinsky
Felix Edmundovich Dzerzhinsky was a Communist revolutionary, famous as the first director of the Bolshevik secret police, the Cheka, known later by many names during the history of the Soviet Union...
. Yevgeny Vuchetich
Yevgeny Vuchetich
Yevgeny Viktorovich Vuchetich was a prominent Soviet sculptor and artist. He is known for his heroic monuments, often of allegoric style.He was born in Yekaterinoslav, Russian Empire...
's monumental statue of Dzerzhinsky (nicknamed Iron Felix) was erected in the center of the square in 1958.

On October 30, 1990, the Memorial
Memorial (society)
Memorial is an international historical and civil rights society that operates in a number of post-Soviet states. It focuses on recording and publicising the Soviet Union's totalitarian past, but also monitors human rights in post-Soviet states....
organization erected a monument to the victims of the Gulag
Gulag
The Gulag was the government agency that administered the main Soviet forced labor camp systems. While the camps housed a wide range of convicts, from petty criminals to political prisoners, large numbers were convicted by simplified procedures, such as NKVD troikas and other instruments of...
, a simple stone from Solovki
Solovki
The Solovki prison camp was located on the Solovetsky Islands, in the White Sea). It was the "mother of the GULAG" according to Aleksandr Solzhenitsyn...
. In 1991 the statue of Dzerzhinsky was removed following the failure of the coup against Mikhail Gorbachev
Mikhail Gorbachev
Mikhail Sergeyevich Gorbachev is a former Soviet statesman, having served as General Secretary of the Communist Party of the Soviet Union from 1985 until 1991, and as the last head of state of the USSR, having served from 1988 until its dissolution in 1991...
, and the square's original name was officially restored.
The Moscow Metro
Moscow Metro
The Moscow Metro is a rapid transit system serving Moscow and the neighbouring town of Krasnogorsk. Opened in 1935 with one line and 13 stations, it was the first underground railway system in the Soviet Union. As of 2011, the Moscow Metro has 182 stations and its route length is . The system is...
station Lubyanka
Lubyanka (Metro)
Lubyanka is a station on the Sokolnicheskaya Line of the Moscow Metro, located under Lubyanka Square. It opened in 1935 as part of the first stage of the Metro.-History:...
is located under Lubyanka Square.
The source of this article is wikipedia, the free encyclopedia.  The text of this article is licensed under the GFDL.