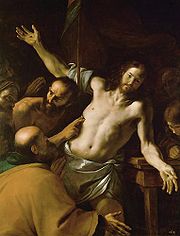 Mattia Preti was an Italian Baroque
Baroque
The Baroque is a period and the style that used exaggerated motion and clear, easily interpreted detail to produce drama, tension, exuberance, and grandeur in sculpture, painting, literature, dance, and music...
artist who worked in Italy
Italy
Italy , officially the Italian Republic languages]] under the European Charter for Regional or Minority Languages. In each of these, Italy's official name is as follows:;;;;;;;;), is a unitary parliamentary republic in South-Central Europe. To the north it borders France, Switzerland, Austria and...
and Malta
Malta
Malta , officially known as the Republic of Malta , is a Southern European country consisting of an archipelago situated in the centre of the Mediterranean, south of Sicily, east of Tunisia and north of Libya, with Gibraltar to the west and Alexandria to the east.Malta covers just over in...
.

Probably before 1630, Preti joined his brother Gregorio (also a painter), in Rome, where he became familiar with the techniques of Caravaggio and his school as well as with the work of Guercino, Rubens, Reni
Guido Reni
Guido Reni was an Italian painter of high-Baroque style.-Biography:Born in Bologna into a family of musicians, Guido Reni was the son of Daniele Reni and Ginevra de’ Pozzi. As a child of nine, he was apprenticed under the Bolognese studio of Denis Calvaert. Soon after, he was joined in that...
, Giovanni Lanfranco
Giovanni Lanfranco
Giovanni Lanfranco was an Italian painter of the Baroque period.-Biography:Giovanni Gaspare Lanfranco was born in Parma, the third son of Stefano and Cornelia Lanfranchi, and was placed as a page in the household of Count Orazio Scotti...
. In Rome, he painted fresco cycles in Sant'Andrea della Valle
Sant'Andrea della Valle
Sant'Andrea della Valle is a basilica church in Rome, Italy, in the rione of Sant'Eustachio. The basilica is the general seat for the religious order of the Theatines.-Overview:...
and San Carlo ai Catinari
San Carlo ai Catinari
San Carlo ai Catinari, also called Santi Biagio e Carlo ai Catinari is an early-Baroque style church in Rome, Italy....
. Between 1644 and 1646, he may have spent time in Venice, but remained based in Rome until 1653, returning later in 1660-61. He painted frescoes for the church of San Biago at Modena (app. 1651-2) and participated in the fresco decoration of the Palazzo Pamphilj
Palazzo Pamphilj
Palazzo Pamphilj, also spelled Palazzo Pamphili, is a palace facing onto the Piazza Navona in Rome. It was built between 1644 and 1650.Since 1920 the palace has housed the Brazilian Embassy in Italy, and in 1964 it became the property of the Federative Republic of Brazil.-History:In 1644, Cardinal...
in Valmontone
Valmontone
Valmontone is a comune in the Province of Rome in the Italian region Lazio, located about 45 km southeast of Rome.-Geography:...
(documented 1660-61), where he worked along with Pier Francesco Mola
Pier Francesco Mola
Pier Francesco Mola was an Italian painter of the High Baroque, mainly active around Rome.-Biography:Mola was born at Coldrerio . At the age of four, he moved to Rome with his father Giovanni Battista, a painter...
, Gaspar Dughet, Francesco Cozza
Francesco Cozza (painter)
Francesco Cozza was an Italian painter of the Baroque period.He was born in Stilo in Calabria and died in Rome. As a young man, he went to Rome and apprenticed with Domenichino...
, Giovanni Battista Tassi (il Cortonese), and Guglielmo Cortese.

During most of 1653-1660, he worked in Naples, where he was influenced by the other major Neapolitan painter of his era, Luca Giordano
Luca Giordano
Luca Giordano was an Italian late Baroque painter and printmaker in etching. Fluent and decorative, he worked successfully in Naples and Rome, Florence and Venice, before spending a decade in Spain....
. One of Preti's masterpieces were a series of large frescoes, ex-voto
Ex-voto
An ex-voto is a votive offering to a saint or divinity. It is given in fulfillment of a vow or in gratitude or devotion...
s of the plague (which were painted on seven city gates but have since been lost to the ravages of time), depicting the Virgin or saints delivering people from the plague. Two sketches are in the Capodimonte Museum in Naples and one other sketch is currently on the UK art market, see illustration. The bozzetto of the Virgin with the baby Jesus looming over the dying and their burial parties envisions a Last Judgement presided over by a woman. Preti also won a commission to supervise the construction, carving, and gilding for the nave and transept of San Pietro a Maiella
San Pietro a Maiella
San Pietro a Majella is a church in Naples, Italy. The term may also refer to the adjacent Naples music conservatory, which occupies the premises of the monastery that used to form a single complex with the church....
.

Having been made a Knight of Grace in the Order of St John, he visited the order’s headquarters in Malta
Malta
Malta , officially known as the Republic of Malta , is a Southern European country consisting of an archipelago situated in the centre of the Mediterranean, south of Sicily, east of Tunisia and north of Libya, with Gibraltar to the west and Alexandria to the east.Malta covers just over in...
in 1659 and spent most of the remainder of his life there. Preti transformed the interior of St. John's Co-Cathedral
St John's Co-Cathedral
St. Johns Co-Cathedral , located in Valletta, Malta, was built by the Knights of Malta between 1573 and 1578, having been commissioned in 1572 by Grand Master Jean de la Cassière as the conventual church of the Order of the Knights Hospitaller of St John, known as the Knights of Malta...
in Valletta
Valletta
Valletta is the capital of Malta, colloquially known as Il-Belt in Maltese. It is located in the central-eastern portion of the island of Malta, and the historical city has a population of 6,098. The name "Valletta" is traditionally reserved for the historic walled citadel that serves as Malta's...
, with a huge series of paintings on the life and martyrdom of St. John the Baptist (1661-1666). In Malta one also can find many paintings of Preti in private collections and in parish churches. His increased reputation led to an expanded circle of patrons, and he received commissions from all over Europe.

Preti was fortunate to enjoy a long career and have a considerable artistic output. His paintings, representative of the exuberant late Baroque style, are held by many great museums, including important collections in Naples
Naples
Naples is a city in Southern Italy, situated on the country's west coast by the Gulf of Naples. Lying between two notable volcanic regions, Mount Vesuvius and the Phlegraean Fields, it is the capital of the region of Campania and of the province of Naples...
, Valletta
Valletta
Valletta is the capital of Malta, colloquially known as Il-Belt in Maltese. It is located in the central-eastern portion of the island of Malta, and the historical city has a population of 6,098. The name "Valletta" is traditionally reserved for the historic walled citadel that serves as Malta's...
, and in his hometown of Taverna.