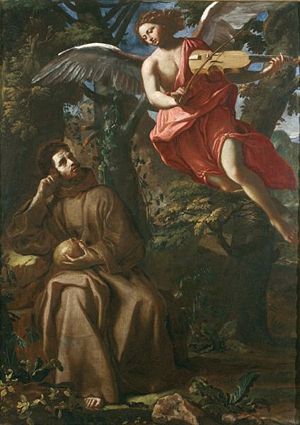 Francesco Cozza was an Italian
Italy
Italy , officially the Italian Republic languages]] under the European Charter for Regional or Minority Languages. In each of these, Italy's official name is as follows:;;;;;;;;), is a unitary parliamentary republic in South-Central Europe. To the north it borders France, Switzerland, Austria and...
painter of the Baroque
Baroque
The Baroque is a period and the style that used exaggerated motion and clear, easily interpreted detail to produce drama, tension, exuberance, and grandeur in sculpture, painting, literature, dance, and music...
period.

He was born in Stilo
Stilo
Stilo is a town and comune in the province of Reggio Calabria, in the Calabria region of southern Italy. It is located 151 km from Reggio Calabria....
in Calabria
Calabria
Calabria , in antiquity known as Bruttium, is a region in southern Italy, south of Naples, located at the "toe" of the Italian Peninsula. The capital city of Calabria is Catanzaro....
and died in Rome
Rome
Rome is the capital of Italy and the country's largest and most populated city and comune, with over 2.7 million residents in . The city is located in the central-western portion of the Italian Peninsula, on the Tiber River within the Lazio region of Italy.Rome's history spans two and a half...
. As a young man, he went to Rome and apprenticed with Domenichino. He traveled with Domenichino to Naples
Naples
Naples is a city in Southern Italy, situated on the country's west coast by the Gulf of Naples. Lying between two notable volcanic regions, Mount Vesuvius and the Phlegraean Fields, it is the capital of the region of Campania and of the province of Naples...
.

He is best known for his expansive panegyric ceiling fresco, Apotheosis of Pamphili House, in the library of Palazzo Pamphili in Piazza Navona
Piazza Navona
Piazza Navona is a city square in Rome, Italy. It is built on the site of the Stadium of Domitian, built in 1st century AD, and follows the form of the open space of the stadium. The ancient Romans came there to watch the agones , and hence it was known as 'Circus Agonalis'...
(1667-73). He also frescoed the Stanza del Fuoco in Palazzo Pamphili in Valmontone
Valmontone
Valmontone is a comune in the Province of Rome in the Italian region Lazio, located about 45 km southeast of Rome.-Geography:...
, 1658-59), where he worked along with Pier Francesco Mola
Pier Francesco Mola
Pier Francesco Mola was an Italian painter of the High Baroque, mainly active around Rome.-Biography:Mola was born at Coldrerio . At the age of four, he moved to Rome with his father Giovanni Battista, a painter...
, Gaspar Dughet, Mattia Preti
Mattia Preti
Mattia Preti was an Italian Baroque artist who worked in Italy and Malta.- Biography :Born in the small town of Taverna in Calabria, Preti was sometimes called Il Cavalier Calabrese...
, Giovanni Battista Tassi (il Cortonese), and Guglielmo Cortese. He also participated with Carlo Maratta
Carlo Maratta
Carlo Maratta or Maratti was an Italian painter, active mostly in Rome, and known principally for his classicizing paintings executed in a Late Baroque Classical manner. Although he is part of the classical tradition stemming from Raphael, he was not exempt from the influence of Baroque painting...
and Domenico Maria Canuti
Domenico Maria Canuti
Domenico Maria Canuti was an Italian painter of the Baroque period, active mainly in Bologna and Rome.Born in Bologna, Canuti first trained in that city under Guido Reni, then with Guercino. He painted many ceiling and wall frescoes...
in fresco decorations of the Palazzo Altieri
Palazzo Altieri
thumb|300 px|The Palazzo AltieriPalazzo Altieri is a palace in Rome, which was the home of the Altieri family in the city. The palace faces the square in front of the Church of the Gesù.-The Altieri:...
. His landscape paintings recall the Carracci style of paesi con figure piccole (landscapes with small figures). He painted a Madonna del Riscatto in church of Santa Francesca Romana. He was received into the Accademia di San Luca
Accademia di San Luca
The Accademia di San Luca, was founded in 1577 as an association of artists in Rome, under the directorship of Federico Zuccari, with the purpose of elevating the work of "artists", which included painters, sculptors and architects, above that of mere craftsmen. Other founders included Girolamo...
at Rome in 1650

He etched several excellent plates in the style of Pietro del Po
Pietro del Po
Pietro del Po was an Italian painter of the Baroque.He was born in Palermo, and studied under Domenichino at Naples. He painted for the churches at Palermo, and afterwards visited Rome, where among other works, he painted a picture of St. Leo, for La Madonna di Costantinopoli. He was more...
, including a St. Peter (1630); a Christ sleeping and adored by Angels, and a St. Mary Magdalene (1650).
The source of this article is wikipedia, the free encyclopedia.  The text of this article is licensed under the GFDL.