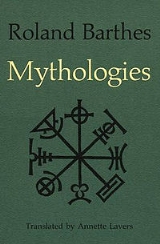 Encyclopedia
Mythologies is a book by Roland Barthes
Roland Barthes
Roland Gérard Barthes was a French literary theorist, philosopher, critic, and semiotician. Barthes' ideas explored a diverse range of fields and he influenced the development of schools of theory including structuralism, semiotics, existentialism, social theory, Marxism, anthropology and...
, published in 1957. It is a collection of essays taken from Les Lettres nouvelles, examining the tendency of contemporary social value systems to create modern myth
Mythology
The term mythology can refer either to the study of myths, or to a body or collection of myths. As examples, comparative mythology is the study of connections between myths from different cultures, whereas Greek mythology is the body of myths from ancient Greece...
s. Barthes also looks at the semiology of the process of myth creation, updating Ferdinand de Saussure
Ferdinand de Saussure
Ferdinand de Saussure was a Swiss linguist whose ideas laid a foundation for many significant developments in linguistics in the 20th century. He is widely considered one of the fathers of 20th-century linguistics...
's system of sign
Sign (semiotics)
A sign is understood as a discrete unit of meaning in semiotics. It is defined as "something that stands for something, to someone in some capacity" It includes words, images, gestures, scents, tastes, textures, sounds – essentially all of the ways in which information can be...
analysis by adding a second level where signs are elevated to the level of myth. It is considered to be a key antecedent of cultural studies
Cultural studies
Cultural studies is an academic field grounded in critical theory and literary criticism. It generally concerns the political nature of contemporary culture, as well as its historical foundations, conflicts, and defining traits. It is, to this extent, largely distinguished from cultural...
.

Mythologies is split into two: Mythologies and Myth Today, the first section consisting of a collection of essays on selected modern myths and the second further and general analysis of the concept.

The first section of Mythologies describes a selection (54 short chapters in the original French, 28 in Annette Lavers' translation, another 25 in Richard Howard's translation, with one, Astrologie, remaining untranslated until the publication of an expanded English edition, with a new introduction by Neil Badmington, by Vintage in 2009) of modern cultural phenomena, chosen for their status as modern myths and for the added meaning that has been conferred upon them. Each short chapter analyses one such myth, ranging from Einstein's Brain to Soap Powders and Detergents. They were originally written as a series of bimonthly essays for the magazine Les Lettres Nouvelles.

In a typical example: Barthes describes the image that has been built up around Red Wine
Wine
Wine is an alcoholic beverage, made of fermented fruit juice, usually from grapes. The natural chemical balance of grapes lets them ferment without the addition of sugars, acids, enzymes, or other nutrients. Grape wine is produced by fermenting crushed grapes using various types of yeast. Yeast...
and how it has been adopted as a French national drink, how it is seen as a social equaliser and the drink of the proletariat
Proletariat
The proletariat is a term used to identify a lower social class, usually the working class; a member of such a class is proletarian...
, partly because it is seen as blood-like (as in Holy Communion) and points out that very little attention is paid to red wine's harmful effects to health, but that it is instead viewed as life-giving and refreshing- 'in cold weather, it is associated with all the myths of becoming warm, and at the height of summer, with all the images of shade, with all things cool and sparkling.'

In another chapter, Barthes explores the myth of Professional wrestling
Professional wrestling
Professional wrestling is a mode of spectacle, combining athletics and theatrical performance.Roland Barthes, "The World of Wrestling", Mythologies, 1957 It takes the form of events, held by touring companies, which mimic a title match combat sport...
. He describes how, unlike in boxing
Boxing
Boxing, also called pugilism, is a combat sport in which two people fight each other using their fists. Boxing is supervised by a referee over a series of between one to three minute intervals called rounds...
, the aim of the sport is not to discover who will win or 'a demonstration of excellence', it is a staged spectacle
Spectacle
In general, spectacle refers to an event that is memorable for the appearance it creates. Derived in Middle English from c. 1340 as "specially prepared or arranged display" it was borrowed from Old French spectacle, itself a reflection of the Latin spectaculum "a show" from spectare "to view,...
acting out society's basic concepts of Good and Evil, of 'Suffering, Defeat and Justice'. The wrestlers, like characters in a pantomime
Pantomime
Pantomime — not to be confused with a mime artist, a theatrical performer of mime—is a musical-comedy theatrical production traditionally found in the United Kingdom, Australia, New Zealand, Canada, Jamaica, South Africa, India, Ireland, Gibraltar and Malta, and is mostly performed during the...
, portray grossly exaggerated stereotypes of human weakness: the traitor, the conceited one, the 'effeminate teddy-boy'. The audience expects to watch them suffer and be punished for their own transgressions of wrestling's rules in a theatrical version of Society's ideology of justice
Justice
Justice is a concept of moral rightness based on ethics, rationality, law, natural law, religion, or equity, along with the punishment of the breach of said ethics; justice is the act of being just and/or fair.-Concept of justice:...
.

In the second half of the book Barthes addresses the question of "What is a myth, today?" with the analysis of ideas such as: myth as a type of speech, and myth on the wings of politics.
Following on from the first section, Barthes justifies and explains his choices and analysis. He calls upon the concepts of semiology developed by Ferdinand de Saussure
Ferdinand de Saussure
Ferdinand de Saussure was a Swiss linguist whose ideas laid a foundation for many significant developments in linguistics in the 20th century. He is widely considered one of the fathers of 20th-century linguistics...
at the turn of the century. Saussure described the connections between an object (the signified
Sign (linguistics)
There are many models of the linguistic sign . A classic model is the one by the Swiss linguist Ferdinand de Saussure. According to him, language is made up of signs and every sign has two sides : the signifier , the "shape" of a word, its phonic component, i.e...
) and its linguistic representation (such as a word, the signifier) and how the two are connected. For example, the object and properties of 'a walnut tree' are joined by the sounds or letters that signify 'walnut tree' to give us the sign for 'walnut tree', a set of sounds and written letters that, although they are only arbitrarily connected to a walnut tree, come to mean the 'walnut tree' to us.

Working with this structure Barthes continues to show his idea of a myth as a further sign, with its roots in language, but to which something has been added. So with a word
Word
In language, a word is the smallest free form that may be uttered in isolation with semantic or pragmatic content . This contrasts with a morpheme, which is the smallest unit of meaning but will not necessarily stand on its own...
(or other linguistic unit) the meaning (apprehended content) and the sound come together to make a sign. To make a myth, the sign itself is used as a signifier, and a new meaning is added, which is the signified. But according to Barthes- this is not added arbitrarily. Although we are not necessarily aware of it, modern myths are created with a reason. As in the example of the red wine, mythologies are formed to perpetuate an idea of society that adheres to the current ideologies of the ruling class
Ruling class
The term ruling class refers to the social class of a given society that decides upon and sets that society's political policy - assuming there is one such particular class in the given society....
and its media
Mass media
Mass media refers collectively to all media technologies which are intended to reach a large audience via mass communication. Broadcast media transmit their information electronically and comprise of television, film and radio, movies, CDs, DVDs and some other gadgets like cameras or video consoles...
.

Barthes demonstrates this theory with the example of a front cover from Paris Match
Paris Match
Paris Match is a French weekly magazine. It covers major national and international news along with celebrity lifestyle features. It was founded in 1949 by the industrialist Jean Prouvost....
, showing a young black soldier in French uniform saluting
Salute
A salute is a gesture or other action used to display respect. Salutes are primarily associated with armed forces, but other organizations and civil people also use salutes.-Military salutes:...
. The signifier: a saluting soldier, cannot offer us further factual information of the young man's life. But it has been chosen by the magazine to symbolise more than the young man; the picture, in combination with the signifieds of Frenchness, militariness, and relative ethnic difference, gives us a message about France
France
The French Republic , The French Republic , The French Republic , (commonly known as France , is a unitary semi-presidential republic in Western Europe with several overseas territories and islands located on other continents and in the Indian, Pacific, and Atlantic oceans. Metropolitan France...
and its citizens. The picture does not explicitly demonstrate 'that France is a great empire, that all her sons, without any colour discrimination, faithfully serve under her flag,' etc., but the combination of the signifier and signified perpetuates the myth of imperial devotion, success and thus; a property of 'significance' for the picture.

“I am at the barber’s, and copy of Paris-Match is offered to me. On the cover, a young Negro in a French uniform is saluting, with his eyes uplifted, probably fixed on a fold of the tricolour. All this is the meaning of the picture. But whether naively or not, I see very well what it signifies to me : that France is a great Empire, that all her sons, without any colour discrimination, faithfully serve under the flag, and that there is no better answer to the detractors of an alleged colonialism than the zeal shown by this Negro in serving his so-called oppressors ...”

In writing about the process of mythologisation, Barthes refers to the tendency of socially constructed
Social constructionism
Social constructionism and social constructivism are sociological theories of knowledge that consider how social phenomena or objects of consciousness develop in social contexts. A social construction is a concept or practice that is the construct of a particular group...
notions, narratives, and assumptions to become "naturalised" in the process, that is, taken unquestioningly as given within a particular culture. Barthes finishes Mythologies by looking at how and why mythologies are built up by the bourgeoisie in its various manifestations. He returns to this theme in later works including The Fashion System.
The source of this article is wikipedia, the free encyclopedia.  The text of this article is licensed under the GFDL.