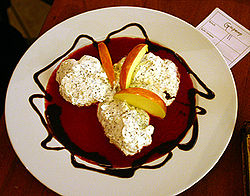 Mascarpone is milky-white in color and is easily spread. It is used in various dishes of the Lombardy
Lombardy
Lombardy is one of the 20 regions of Italy. The capital is Milan. One-sixth of Italy's population lives in Lombardy and about one fifth of Italy's GDP is produced in this region, making it the most populous and richest region in the country and one of the richest in the whole of Europe...
region of Italy
Italy
Italy , officially the Italian Republic languages]] under the European Charter for Regional or Minority Languages. In each of these, Italy's official name is as follows:;;;;;;;;), is a unitary parliamentary republic in South-Central Europe. To the north it borders France, Switzerland, Austria and...
, where it is a specialty. It is a main ingredient of modern Tiramisu
Tiramisu
Tiramisu, , , literally "pick me up", is an Italian cake and dessert.It is made of ladyfingers dipped in coffee, layered with a whipped mixture of egg yolks and mascarpone, and flavored with liquor and cocoa...
. It is sometimes used instead of butter
Butter
Butter is a dairy product made by churning fresh or fermented cream or milk. It is generally used as a spread and a condiment, as well as in cooking applications, such as baking, sauce making, and pan frying...
or Parmesan cheese
Parmigiano Reggiano
Parmigiano-Reggiano , also known in English as Parmesan , is a hard granular cheese, cooked but not pressed, named after the producing areas near Parma, Reggio Emilia, Modena, and Bologna , and Mantova , Italy...
to thicken and enrich risotto
Risotto
Risotto is a class of Italian dishes of rice cooked in broth to a creamy consistency. The broth may be meat-, fish-, or vegetable-based; many kinds include Parmesan cheese, butter, and onion...
.

Mascarpone originated in the area between Lodi and Abbiategrasso
Abbiategrasso
Abbiategrasso is a comune and town in the province of Milan, Italian region of Lombardy, situated in the Po valley approximately 22 km from Milan and 38 km from Pavia.- History :The town dates from Roman times...
, Italy
Italy
Italy , officially the Italian Republic languages]] under the European Charter for Regional or Minority Languages. In each of these, Italy's official name is as follows:;;;;;;;;), is a unitary parliamentary republic in South-Central Europe. To the north it borders France, Switzerland, Austria and...
, southwest of Milan
Milan
Milan is the second-largest city in Italy and the capital city of the region of Lombardy and of the province of Milan. The city proper has a population of about 1.3 million, while its urban area, roughly coinciding with its administrative province and the bordering Province of Monza and Brianza ,...
, probably in the late 16th or early 17th century. The name is said to come from mascarpa, a milk product made from the whey of stracchino
Stracchino
Stracchino also known as crescenza is a type of Italian cow’s-milk cheese, typical of Lombardy, Piedmont, and Veneto. It is eaten very young, has no rind and a very soft, creamy texture and normally a mild and delicate flavour. It is normally square in form.The name of the cheese derives from the...
(shortly-aged cheese), or from mascarpia, the word in the local dialect for ricotta
Ricotta
Ricotta is an Italian dairy product made from sheep milk whey left over from the production of cheese. Although typically referred to as ricotta cheese, ricotta is not properly a cheese because it is not produced by coagulation of casein...
(although mascarpone is not made from whey, as ricotta is).
The source of this article is wikipedia, the free encyclopedia.  The text of this article is licensed under the GFDL.