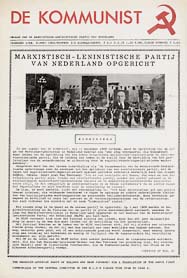 The Marxist-Leninist Party of the Netherlands (in Dutch
Dutch language
Dutch is a West Germanic language and the native language of the majority of the population of the Netherlands, Belgium, and Suriname, the three member states of the Dutch Language Union. Most speakers live in the European Union, where it is a first language for about 23 million and a second...
: Marxistisch-Leninistische Partij Nederland, MLPN) was a fake pro-China
China
Chinese civilization may refer to:* China for more general discussion of the country.* Chinese culture* Greater China, the transnational community of ethnic Chinese.* History of China* Sinosphere, the area historically affected by Chinese culture...
communist party in the Netherlands
Netherlands
The Netherlands is a constituent country of the Kingdom of the Netherlands, located mainly in North-West Europe and with several islands in the Caribbean. Mainland Netherlands borders the North Sea to the north and west, Belgium to the south, and Germany to the east, and shares maritime borders...
set up by the Dutch secret service BVD
General Intelligence and Security Service
Algemene Inlichtingen- en Veiligheidsdienst , formerly known as the BVD is the General Intelligence and Security Service or The Secret service of the Netherlands. The office is in Zoetermeer...
to develop contacts with the Chinese government for espionage purposes. It existed from 1968 to the early 1990s. The MLPN was led throughout its existence by Pieter Boevé, who used the pseudonym Chris Petersen.

Boevé had previously served as the international secretary of the Marxist-Leninist Centre of the Netherlands (MLCN), using his position to create contacts in China
People's Republic of China
China , officially the People's Republic of China , is the most populous country in the world, with over 1.3 billion citizens. Located in East Asia, the country covers approximately 9.6 million square kilometres...
and Albania
Albania
Albania , officially known as the Republic of Albania , is a country in Southeastern Europe, in the Balkans region. It is bordered by Montenegro to the northwest, Kosovo to the northeast, the Republic of Macedonia to the east and Greece to the south and southeast. It has a coast on the Adriatic Sea...
. Boevé had also started his own publication, De Kommunist, in 1966 which annoyed the MLCN. The double play of Boevé was discovered by his party comrades. He was expelled and formed his own League of Marxist-Leninists in the Netherlands (Liga van Marxisten-Leninisten in Nederland) in 1968. A year later it took the name MLPN. It claimed to represent the principles of Maoism
Maoism
Maoism, also known as the Mao Zedong Thought , is claimed by Maoists as an anti-Revisionist form of Marxist communist theory, derived from the teachings of the Chinese political leader Mao Zedong . Developed during the 1950s and 1960s, it was widely applied as the political and military guiding...
against the "heresies" of the official pro-USSR Communist Party of the Netherlands
Communist Party of the Netherlands
The Communist Party of the Netherlands was a Dutch communist political party. The CPN is one of the predecessors of the GreenLeft.- Foundation :...
. Boevé frequently received gifts and travelling expenses from the Chinese government, and was on one occasion the guest of honour at a special banquet presided over by Zhou Enlai
Zhou Enlai
Zhou Enlai was the first Premier of the People's Republic of China, serving from October 1949 until his death in January 1976...
.

Boevé had joined the Dutch secret service in 1955 after attending a student conference in Moscow
Moscow
Moscow is the capital, the most populous city, and the most populous federal subject of Russia. The city is a major political, economic, cultural, scientific, religious, financial, educational, and transportation centre of Russia and the continent...
. He developed several contacts in China, and eventually convinced the Chinese leadership that the MLPN constituted a legitimate party in the Netherlands. In reality, it never had more than a dozen members, none of whom, aside from Boevé, knew of its true purpose. The MLPN disbanded shortly after the fall of the Berlin Wall
Berlin Wall
The Berlin Wall was a barrier constructed by the German Democratic Republic starting on 13 August 1961, that completely cut off West Berlin from surrounding East Germany and from East Berlin...
in 1989, when the BVD judged that it was no longer necessary.

Boevé and another former BVD member went public with the party's story in 2004. Boevé has expressed no regrets for his actions, and now openly refers to the MLPN as having been a "fake party".

Boevé also claims that he played a role in arranging the historic meeting of Richard Nixon
Richard Nixon
Richard Milhous Nixon was the 37th President of the United States, serving from 1969 to 1974. The only president to resign the office, Nixon had previously served as a US representative and senator from California and as the 36th Vice President of the United States from 1953 to 1961 under...
and Mao Zedong
Mao Zedong
Mao Zedong, also transliterated as Mao Tse-tung , and commonly referred to as Chairman Mao , was a Chinese Communist revolutionary, guerrilla warfare strategist, Marxist political philosopher, and leader of the Chinese Revolution...
in 1972. He was asked by Chinese contacts as to his views on the possibility of better relations with the United States of America; he took this as a sign that the Chinese government was interested in thawing relations between the two countries, and passed his information on to the CIA.

The MLPN published a monthly periodical called De Kommunist (The Communist). It was written entirely by BVD operatives.