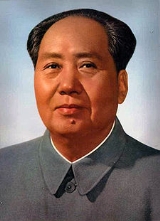 Overview
Mao Zedong, also transliterated as Mao Tse-tung , and commonly referred to as Chairman Mao (December 26, 1893 September 9, 1976), was a Chinese
Han Chinese
Han Chinese are an ethnic group native to China and are the largest single ethnic group in the world.Han Chinese constitute about 92% of the population of the People's Republic of China , 98% of the population of the Republic of China , 78% of the population of Singapore, and about 20% of the...
Communist
Communism
Communism is a social, political and economic ideology that aims at the establishment of a classless, moneyless, revolutionary and stateless socialist society structured upon common ownership of the means of production...
revolutionary
Revolutionary
A revolutionary is a person who either actively participates in, or advocates revolution. Also, when used as an adjective, the term revolutionary refers to something that has a major, sudden impact on society or on some aspect of human endeavor.-Definition:...
, guerrilla warfare
Guerrilla warfare
Guerrilla warfare is a form of irregular warfare and refers to conflicts in which a small group of combatants including, but not limited to, armed civilians use military tactics, such as ambushes, sabotage, raids, the element of surprise, and extraordinary mobility to harass a larger and...
strategist, Marxist
Marxism
Marxism is an economic and sociopolitical worldview and method of socioeconomic inquiry that centers upon a materialist interpretation of history, a dialectical view of social change, and an analysis and critique of the development of capitalism. Marxism was pioneered in the early to mid 19th...
political philosopher
Political philosophy
Political philosophy is the study of such topics as liberty, justice, property, rights, law, and the enforcement of a legal code by authority: what they are, why they are needed, what, if anything, makes a government legitimate, what rights and freedoms it should protect and why, what form it...
, and leader of the Chinese Revolution. He was the architect and founding father of the People's Republic of China
People's Republic of China
China , officially the People's Republic of China , is the most populous country in the world, with over 1.3 billion citizens. Located in East Asia, the country covers approximately 9.6 million square kilometres...
(PRC) from its establishment in 1949, and held control over the nation until his death in 1976. His theoretical contribution to Marxism–Leninism, along with his military strategies and brand of policies, are collectively known as Maoism
Maoism
Maoism, also known as the Mao Zedong Thought , is claimed by Maoists as an anti-Revisionist form of Marxist communist theory, derived from the teachings of the Chinese political leader Mao Zedong . Developed during the 1950s and 1960s, it was widely applied as the political and military guiding...
.
Mao rose to power by commanding the Long March
Long March
The Long March was a massive military retreat undertaken by the Red Army of the Communist Party of China, the forerunner of the People's Liberation Army, to evade the pursuit of the Kuomintang army. There was not one Long March, but a series of marches, as various Communist armies in the south...
, forming a Second United Front with Kuomintang
Kuomintang
The Kuomintang of China , sometimes romanized as Guomindang via the Pinyin transcription system or GMD for short, and translated as the Chinese Nationalist Party is a founding and ruling political party of the Republic of China . Its guiding ideology is the Three Principles of the People, espoused...
(KMT) during the Second Sino-Japanese War
Second Sino-Japanese War
The Second Sino-Japanese War was a military conflict fought primarily between the Republic of China and the Empire of Japan. From 1937 to 1941, China fought Japan with some economic help from Germany , the Soviet Union and the United States...
to repel a Japanese
Empire of Japan
The Empire of Japan is the name of the state of Japan that existed from the Meiji Restoration on 3 January 1868 to the enactment of the post-World War II Constitution of...
invasion, and later leading the Communist Party of China
Communist Party of China
The Communist Party of China , also known as the Chinese Communist Party , is the founding and ruling political party of the People's Republic of China...
(CPC) to victory against Generalissimo
Generalissimo
Generalissimo and Generalissimus are military ranks of the highest degree, superior to Field Marshal and other five-star ranks.-Usage:...
Chiang Kai-shek
Chiang Kai-shek
Chiang Kai-shek was a political and military leader of 20th century China. He is known as Jiǎng Jièshí or Jiǎng Zhōngzhèng in Mandarin....
's KMT in the Chinese Civil War
Chinese Civil War
The Chinese Civil War was a civil war fought between the Kuomintang , the governing party of the Republic of China, and the Communist Party of China , for the control of China which eventually led to China's division into two Chinas, Republic of China and People's Republic of...
.

What can you say about the legacy of mao?
More

What were Mao Zedong's political ideas?

What was the period of time called when Mao tried to eliminate anyone that criticized the government?

Who are our enemies? Who are our friends? This is a question of the first importance for the revolution.

The country is so beautiful, where so many heroes had devoted their lives into it. Sorry that the Qin Emperor or the Han Wu Emperor lacks a sense for literacy; while the founders of the Tang and Song dynasties came short in style. The great man, Genghis Khan, only knew how to shoot eagles with an arrow. The past is past. To see real heroes, look around you.

"You are dictatorial." My dear sirs, you are right, that is just what we are. All the experience the Chinese people have accumulated through several decades teaches us to enforce the people's democratic dictatorship, that is, to deprive the reactionaries of the right to speak and let the people alone have that right.

Ours is a people's democratic dictatorship, led by the working class and based on the worker-peasant alliance.

On the Correct Handling of Contradiction (1957)
More
x