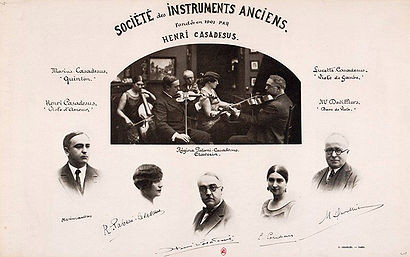 Marius Casadesus achieved perhaps his greatest fame (or notoriety) through his association with the so-called "Adélaïde Concerto
Adelaide Concerto
The Adélaïde Concerto is the nickname of a Violin Concerto in D Major attributed to Wolfgang Amadeus Mozart and given the catalog number K. Anh. 294a in the third edition of the standard Köchel catalogue of Mozart's works. Unknown until the 20th century, this concerto was later discovered to be a...
" attributed to Mozart
Wolfgang Amadeus Mozart
Wolfgang Amadeus Mozart , baptismal name Johannes Chrysostomus Wolfgangus Theophilus Mozart , was a prolific and influential composer of the Classical era. He composed over 600 works, many acknowledged as pinnacles of symphonic, concertante, chamber, piano, operatic, and choral music...
. This concerto was published in 1933 in a piano transcription under Mozart's name, with Casadesus as "editor." Many music scholars believed in its authenticity, and Yehudi Menuhin
Yehudi Menuhin
Yehudi Menuhin, Baron Menuhin, OM, KBE was a Russian Jewish American violinist and conductor who spent most of his performing career in the United Kingdom. He was born to Russian Jewish parents in the United States, but became a citizen of Switzerland in 1970, and of the United Kingdom in 1985...
made a recording of the concerto
Concerto
A concerto is a musical work usually composed in three parts or movements, in which one solo instrument is accompanied by an orchestra.The etymology is uncertain, but the word seems to have originated from the conjunction of the two Latin words...
. It was even given a place in the Köchel-Verzeichnis
Köchel-Verzeichnis
The Köchel-Verzeichnis is a complete, chronological catalogue of compositions by Wolfgang Amadeus Mozart which was originally created by Ludwig von Köchel. It is abbreviated K or KV. For example, Mozart's Requiem in D minor was, according to Köchel's counting, the 626th piece Mozart composed....
(the standard catalog of Mozart's works), albeit as "K. Anh. 294a." ("Anh." denotes "Anhang" or "appendix" to the catalog.) However, Mozart expert Alfred Einstein's doubts about this piece were confirmed when Casadesus later admitted his authorship in court in 1977 during a copyright dispute.

Casadesus' brother Henri
Henri Casadesus
Henri Casadesus was a violist and music publisher. He was the brother of Marius Casadesus, uncle of the famous pianist Robert Casadesus, and granduncle of Jean Casadesus....
was also a noted author of musical hoaxes, such as "Handel
HANDEL
HANDEL was the code-name for the UK's National Attack Warning System in the Cold War. It consisted of a small console consisting of two microphones, lights and gauges. The reason behind this was to provide a back-up if anything failed....
's Viola concerto in b-minor" and "J.C. Bach's
Johann Christian Bach
Johann Christian Bach was a composer of the Classical era, the eleventh and youngest son of Johann Sebastian Bach. He is sometimes referred to as 'the London Bach' or 'the English Bach', due to his time spent living in the British capital...
Viola Concerto in c-minor."

Casadesus is also known for having given the first recital of Ravel's
Maurice Ravel
Joseph-Maurice Ravel was a French composer known especially for his melodies, orchestral and instrumental textures and effects...
"Tzigane" in the presence of the composer in Barcelona
Barcelona
Barcelona is the second largest city in Spain after Madrid, and the capital of Catalonia, with a population of 1,621,537 within its administrative limits on a land area of...
.
The source of this article is wikipedia, the free encyclopedia.  The text of this article is licensed under the GFDL.