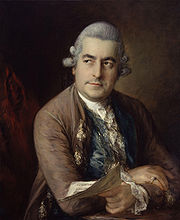 Johann Christian Bach was a composer
Composer
A composer is a person who creates music, either by musical notation or oral tradition, for interpretation and performance, or through direct manipulation of sonic material through electronic media...
of the Classical era, the eleventh and youngest son of Johann Sebastian Bach
Johann Sebastian Bach
Johann Sebastian Bach was a German composer, organist, harpsichordist, violist, and violinist whose sacred and secular works for choir, orchestra, and solo instruments drew together the strands of the Baroque period and brought it to its ultimate maturity...
. He is sometimes referred to as 'the London Bach' or 'the English Bach', due to his time spent living in the British capital. He is noted for influencing the concerto style of Mozart
Wolfgang Amadeus Mozart
Wolfgang Amadeus Mozart , baptismal name Johannes Chrysostomus Wolfgangus Theophilus Mozart , was a prolific and influential composer of the Classical era. He composed over 600 works, many acknowledged as pinnacles of symphonic, concertante, chamber, piano, operatic, and choral music...
.

Johann Christian Bach was born to Johann Sebastian
Johann Sebastian Bach
Johann Sebastian Bach was a German composer, organist, harpsichordist, violist, and violinist whose sacred and secular works for choir, orchestra, and solo instruments drew together the strands of the Baroque period and brought it to its ultimate maturity...
and Anna Magdalena Bach
Anna Magdalena Bach
Anna Magdalena Bach was the second wife of Johann Sebastian Bach.-Biography:...
in Leipzig, Germany. His distinguished father was already 50 at the time of his birth, which would perhaps contribute to the sharp differences between his music and that of his father. Even so, his father first instructed him in music and that instruction continued until his death. After his father's death, when Johann Christian was 15, he worked with his second-oldest half brother Carl Philipp Emanuel Bach
Carl Philipp Emanuel Bach
right|250pxCarl Philipp Emanuel Bach was a German Classical period musician and composer, the fifth child and second son of Johann Sebastian Bach and Maria Barbara Bach...
, who was twenty-one years his senior and considered at the time to be the most musically gifted of Bach's sons.

He enjoyed a promising career, first as a composer then as a performer playing alongside Carl Friedrich Abel, the notable player of the viola da gamba. He composed cantatas, chamber music, keyboard and orchestral works, operas and symphonies.
Bach lived in Italy for many years starting in 1756, studying with Padre Martini in Bologna
Bologna
Bologna is the capital city of Emilia-Romagna, in the Po Valley of Northern Italy. The city lies between the Po River and the Apennine Mountains, more specifically, between the Reno River and the Savena River. Bologna is a lively and cosmopolitan Italian college city, with spectacular history,...
. He became organist at the Milan cathedral in 1760. During his time in Italy, he converted from Lutheranism
Lutheranism
Lutheranism is a major branch of Western Christianity that identifies with the theology of Martin Luther, a German reformer. Luther's efforts to reform the theology and practice of the church launched the Protestant Reformation...
to Catholicism
Roman Catholic Church
The Catholic Church, also known as the Roman Catholic Church, is the world's largest Christian church, with over a billion members. Led by the Pope, it defines its mission as spreading the gospel of Jesus Christ, administering the sacraments and exercising charity...
. In 1762, Bach travelled to London to première three operas at the King's Theatre
Her Majesty's Theatre
Her Majesty's Theatre is a West End theatre, in Haymarket, City of Westminster, London. The present building was designed by Charles J. Phipps and was constructed in 1897 for actor-manager Herbert Beerbohm Tree, who established the Royal Academy of Dramatic Art at the theatre...
, including Orione on 19 February 1763. That established his reputation in England, and he became music master to Queen Charlotte. He met soprano Cecilia Grassi in 1766 and married her shortly thereafter. She was his junior by eleven years. They had no children.

Johann Christian Bach's father died when Johann Christian was only fifteen. This is perhaps one reason why it is difficult to find points of similarity between the music of Johann Sebastian Bach and that of Johann Christian. By contrast, the piano sonatas of Carl Philipp Emanuel Bach, Johann Christian's much older half brother, tend to invoke certain elements of his father at times, especially with regard to the use of counterpoint
Counterpoint
In music, counterpoint is the relationship between two or more voices that are independent in contour and rhythm and are harmonically interdependent . It has been most commonly identified in classical music, developing strongly during the Renaissance and in much of the common practice period,...
. (C.P.E. was 36 by the time J.S. died).

The symphonies
Symphony
A symphony is an extended musical composition in Western classical music, scored almost always for orchestra. A symphony usually contains at least one movement or episode composed according to the sonata principle...
in the Work List for J. C. Bach in the New Grove Bach Family listed ninety-one works. A little more than half of these, 48 works, are considered authentic, while the remaining 43 are doubtful.

There are two others named Johann Christian Bach in the Bach family tree, but neither was a composer.

Mozart esteemed J.C. Bach's music highly and arranged three sonatas from the latter's Op. 5 into keyboard concertos
Piano Concertos K. 107 (Mozart)
The Piano Concertos, K. 107 are three keyboard concertos by Wolfgang Amadeus Mozart, based on sonatas by Johann Christian Bach. These sonatas are from Christian Bach's Op. 5; Mozart turned Sonata no. 2 in D, Sonata no. 3 in G, and Sonata no. 4 in E flat from this set into the three concertos of K...
.