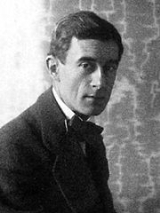 Overview
Joseph-Maurice Ravel was a French composer known especially for his melodies, orchestral and instrumental textures
Texture (music)
In music, texture is the way the melodic, rhythmic, and harmonic materials are combined in a composition , thus determining the overall quality of sound of a piece...
and effects. Much of his piano music
Piano Music
Piano Music is a suite of four short pieces composed by Alexina Louie in 1982 for the Alliance for Canadian New Music Projects. The four pieces are The Enchanted Bells, Changes, Distant Memories, and Once upon a time....
, chamber music
Chamber music
Chamber music is a form of classical music, written for a small group of instruments which traditionally could be accommodated in a palace chamber. Most broadly, it includes any art music that is performed by a small number of performers with one performer to a part...
, vocal music
Vocal music
Vocal music is a genre of music performed by one or more singers, with or without instrumental accompaniment, in which singing provides the main focus of the piece. Music which employs singing but does not feature it prominently is generally considered instrumental music Vocal music is a genre of...
and orchestral music has entered the standard concert repertoire.

Ravel's piano compositions, such as Jeux d'eau, Miroirs
Miroirs
Miroirs, or "Reflections" is a suite for solo piano written by French impressionist composer Maurice Ravel between 1904 and 1905. First performed by Ricardo Viñes in 1906, Miroirs contains five movements, each dedicated to a fellow member of the French impressionist group, Les...
, Le tombeau de Couperin
Le Tombeau de Couperin
Le tombeau de Couperin is a suite for solo piano by Maurice Ravel, composed between 1914 and 1917, in six movements. Each movement is dedicated to the memory of friends of the composer who had died fighting in World War I...
and Gaspard de la nuit
Gaspard de la nuit
Gaspard de la nuit: Trois poèmes pour piano d'après Aloysius Bertrand is a piece for solo piano by Maurice Ravel, written in 1908. It has three movements, each based on a poem by Aloysius Bertrand...
, demand considerable virtuosity
Virtuoso
A virtuoso is an individual who possesses outstanding technical ability in the fine arts, at singing or playing a musical instrument. The plural form is either virtuosi or the Anglicisation, virtuosos, and the feminine form sometimes used is virtuosa...
from the performer, and his orchestral music
Orchestra
An orchestra is a sizable instrumental ensemble that contains sections of string, brass, woodwind, and percussion instruments. The term orchestra derives from the Greek ορχήστρα, the name for the area in front of an ancient Greek stage reserved for the Greek chorus...
, including Daphnis et Chloé
Daphnis et Chloé
Daphnis et Chloé is a ballet with music by Maurice Ravel. Ravel described it as a "symphonie choréographique" . The scenario was adapted by Michel Fokine from an eponymous romance by the Greek writer Longus thought to date from around the 2nd century AD...
and his arrangement of Modest Mussorgsky
Modest Mussorgsky
Modest Petrovich Mussorgsky was a Russian composer, one of the group known as 'The Five'. He was an innovator of Russian music in the romantic period...
's Pictures at an Exhibition
Pictures at an Exhibition
Pictures at an Exhibition is a suite in ten movements composed for piano by Russian composer Modest Mussorgsky in 1874.The suite is Mussorgsky's most famous piano composition, and has become a showpiece for virtuoso pianists...
, uses a variety of sound and instrumentation
Instrumentation (music)
In music, instrumentation refers to the particular combination of musical instruments employed in a composition, and to the properties of those instruments individually...
.

Ravel is perhaps known best for his orchestral work Boléro
Boléro
Boléro is a one-movement orchestral piece by Maurice Ravel . Originally composed as a ballet commissioned by Russian ballerina Ida Rubinstein, the piece, which premiered in 1928, is Ravel's most famous musical composition....
(1928), which he considered trivial and once described as "a piece for orchestra without music".

According to SACEM
Société des auteurs, compositeurs et éditeurs de musique
Société des auteurs, compositeurs et éditeurs de musique is a French professional association collecting payments of artists’ rights and distributing the rights to the original songwriters, composers and music publishers.-History:...
, Ravel's estate
Estate (law)
An estate is the net worth of a person at any point in time. It is the sum of a person's assets - legal rights, interests and entitlements to property of any kind - less all liabilities at that time. The issue is of special legal significance on a question of bankruptcy and death of the person...
earns more royalties
Royalties
Royalties are usage-based payments made by one party to another for the right to ongoing use of an asset, sometimes an intellectual property...
than that of any other French composer.

Did maurice ravel compose the music for mother goose?

I once heard a quote of Ravel's referring to the time he composed Le Tambeau de Couperin. He said something like,"I have found the forms, all I need ...
More

"But do these people never come up with the idea that I might be artificial by nature?"
More
x