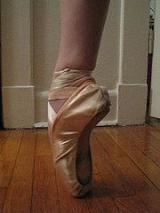 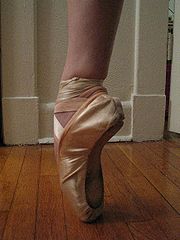 Because serious foot deformities can result from starting pointe too early, pre-professional students do not usually begin dancing en pointe until after the age of 10 and it should be discouraged for others. In the major dance academies, which have physicians available to ensure that the dancers' feet have ossified
Ossification
Ossification is the process of laying down new bone material by cells called osteoblasts. It is synonymous with bone tissue formation...
sufficiently, students may be allowed to start pointe work earlier. It is dangerous to start en pointe at such a young age without orthopaedic approval because the bones in the feet are still growing and can be permanently damaged.

Otherwise, students are ready for pointe when they can hold their turnout from the hips while performing center combinations, hold a proper ballet position (straight back, good turnout, etc.), pull up correctly in the legs, and balance securely in releve because dancing en pointe requires one to use the entire body, including the legs, back, and abdominal muscles.

Pedicure
Pedicure
A pedicure is a way to improve the appearance of the feet and the nails. It provides a similar service to a manicure. The word pedicure refers to superficial cosmetic treatment of the feet and toenails...
s are not advised for pointe dancers as dead skin and callus
Callus
A callus is an especially toughened area of skin which has become relatively thick and hard in response to repeated friction, pressure, or other irritation. Rubbing that is too frequent or forceful will cause blisters rather than allow calluses to form. Since repeated contact is required, calluses...
es on the feet are helpful and act as insulation against the strain of the shoe. Blister
Blister
A blister is a small pocket of fluid within the upper layers of the skin, typically caused by forceful rubbing , burning, freezing, chemical exposure or infection. Most blisters are filled with a clear fluid called serum or plasma...
s, boils, athlete's foot
Athlete's foot
Athlete's foot is a fungal infection of the skin that causes scaling, flaking, and itch of affected areas. It is caused by fungi in the genus Trichophyton and is typically transmitted in moist areas where people walk barefoot, such as showers or bathhouses...
, cuts of the feet, and even bleeding are to be expected. Toenails are generally cut at least one day before dance class or performance to let the toes adjust to the new length of the nails.

Preparation for pointe work is a gradual process, starting with strengthening exercises at the barre
Barre (ballet)
A barre is a stationary handrail that is used during ballet warm up exercises. The term also refers to the exercises that are performed at the barre, as well as that part of a ballet class that incorporates barre exercises.-Construction:...
. This will vary according to the teacher's preferences, method, and Syllabus
Syllabus
A syllabus , is an outline and summary of topics to be covered in an education or training course. It is descriptive...
. The first exercises at the barre are usually relevés and échappés. Only once the student is fully comfortable in executing the steps on both feet (and the tendons are strong enough), steps ending on one foot are introduced, such as pas de bourrée en pointes and retiré en pointes.

After barre work, the student will progress to exercises in the center. This will usually be led by an instructor who will be stressing proper turnout, pointing of the toes when raised, and proper use of ballet technique while en pointe. In centre practice, Mme Vaganova suggests as first exercises on both feet relevés and échappés en pointe.

The stiffened shank and box help spread the weight of the dancer's body across the foot instead of being concentrated in the toes. For this to be successful, the shoe must be fitted perfectly to suit the dancer's foot. Each pointe shoe manufacturer makes a range of shoes to fit different foot shapes, e.g., high or low arch, high or low profile, Egyptian, Greek or Giselle toes, etc. Tips may also be slightly convex (for easier rotation) or slightly concave (for easier balance) and the choice will depend on the part, sometimes with different tips on each foot.

Pointe shoe fitters require extensive training and experience to identify the different foot conformations and the makes and models of shoes that suit them. For this reason, it is recommended that students do not attempt to buy their first pointe shoes online or by mail but visit a specialist ballet store for expert advice.

Pointe shoes must be "broken in" before dancing in them. This consists of bending the hard shank sufficiently to create a platform for the heel and sometimes softening the box slightly to allow the shoe to easily bend in demi-pointe.

A dancer may rise on the toes by passing through demi-pointe, or by springing on to her toes with a small hop. The second method is more common in the Russian method and was first introduced by Enrico Cecchetti.

Modern ballet technique demands the use of both- usually rolling through for adages and springing on pointe in allegros.

Extensor tendinitis
Hallux
Hallux
In tetrapods, the hallux is the innermost toe of the foot. Despite its name it may not be the longest toe on the foot of some individuals...
limitus and rigidus
Hammer toe
Hammer toe
A hammer toe or contracted toe is a deformity of the proximal interphalangeal joint of the second, third, or fourth toe causing it to be permanently bent, resembling a hammer...
s : when the toes bend up permanently at the middle joint.
Ingrown toenails
Ingrown nail
Onychocryptosis , also known as an ingrown toenail, or unguis incarnatus is a common form of nail disease. It is an often painful condition in which the nail grows so that it cuts into one or both sides of the paronychium or nail bed...

Jammed big toes
Neuroma
Neuroma
A neuroma is a growth or tumor of nerve tissue. Just as the Latin word for swelling is now restricted to neoplasias, the equivalent Greek suffix -oma has shared in that fate. Thus, the typical modern usage of neuroma is for nerve tumors...
s
Sesamoiditis
Sesamoiditis
Sesamoiditis is inflammation of the sesamoid bones. In humans it occurs on the bottom of the foot, just behind the large toe. There are normally two sesamoid bones on each foot; sometimes sesamoids can be bipartite, which means they each comprise two separate pieces. The sesamoids are roughly the...

Sprain
Sprain
A sprain is an injury in a joint, caused by the ligament being stretched beyond its capacity. A muscular tear caused in the same manner is referred to as a strain. In cases where either ligament or muscle tissue is torn, immobilization and surgical repair may be necessary...
ed ankle
Ankle
The ankle joint is formed where the foot and the leg meet. The ankle, or talocrural joint, is a synovial hinge joint that connects the distal ends of the tibia and fibula in the lower limb with the proximal end of the talus bone in the foot...
s
Stress fracture
Stress fracture
A stress fracture is one type of incomplete fracture in bones. It is caused by "unusual or repeated stress" and also heavy continuous weight on the ankle or leg...
s
Thickened toenails
Tendonitis
Tendonitis
Tendinitis , meaning inflammation of a tendon , is a type of tendinopathy often confused with the more common tendinosis, which has similar symptoms but requires different treatment...
, most commonly Achilles Tendinitis
the toes will be uneven and your second toe will be pushed farther away from your big toe

Because pointe work can cause friction between the toes and the hard box of the pointe shoe, dancers use several methods to prevent chafing and blister
Blister
A blister is a small pocket of fluid within the upper layers of the skin, typically caused by forceful rubbing , burning, freezing, chemical exposure or infection. Most blisters are filled with a clear fluid called serum or plasma...
s. Dancers often use lamb's wool
Wool
Wool is the textile fiber obtained from sheep and certain other animals, including cashmere from goats, mohair from goats, qiviut from muskoxen, vicuña, alpaca, camel from animals in the camel family, and angora from rabbits....
or toe pads made of foam or gel
Gel
A gel is a solid, jelly-like material that can have properties ranging from soft and weak to hard and tough. Gels are defined as a substantially dilute cross-linked system, which exhibits no flow when in the steady-state...
, or even folded paper toweling. If any type of padding is used excessively, it will impair the ability to "feel the floor." Many dancers also use sports tape around their toes in order to further prevent blisters and bruised toenails. Also, keeping the toenails clipped as short as possible (without bleeding) is useful in preventing bruised toenails.
The source of this article is wikipedia, the free encyclopedia.  The text of this article is licensed under the GFDL.