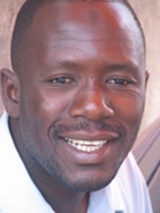 Encyclopedia
The Swahili people are a Bantu ethnic group and culture found in East Africa, mainly in the coastal regions and the islands of Kenya
Kenya
Kenya , officially known as the Republic of Kenya, is a country in East Africa that lies on the equator, with the Indian Ocean to its south-east...
, Tanzania
Tanzania
The United Republic of Tanzania is a country in East Africa bordered by Kenya and Uganda to the north, Rwanda, Burundi, and the Democratic Republic of the Congo to the west, and Zambia, Malawi, and Mozambique to the south. The country's eastern borders lie on the Indian Ocean.Tanzania is a state...
and north Mozambique
Mozambique
Mozambique, officially the Republic of Mozambique , is a country in southeastern Africa bordered by the Indian Ocean to the east, Tanzania to the north, Malawi and Zambia to the northwest, Zimbabwe to the west and Swaziland and South Africa to the southwest...
. According to JoshuaProject, the Swahili number in at around 1,328,000. The name Swahili is derived from the Arabic
Arabic language
Arabic is a name applied to the descendants of the Classical Arabic language of the 6th century AD, used most prominently in the Quran, the Islamic Holy Book...
word Sawahil, meaning "coastal dwellers", and they speak the Swahili language
Swahili language
Swahili or Kiswahili is a Bantu language spoken by various ethnic groups that inhabit several large stretches of the Mozambique Channel coastline from northern Kenya to northern Mozambique, including the Comoro Islands. It is also spoken by ethnic minority groups in Somalia...
. Only a small fraction of those who use Swahili are first language
First language
A first language is the language a person has learned from birth or within the critical period, or that a person speaks the best and so is often the basis for sociolinguistic identity...
speakers and even fewer are ethnic Swahilis.

The Swahili are original Bantu inhabitants on the coast of East Africa, in Kenya
Kenya
Kenya , officially known as the Republic of Kenya, is a country in East Africa that lies on the equator, with the Indian Ocean to its south-east...
, Tanzania
Tanzania
The United Republic of Tanzania is a country in East Africa bordered by Kenya and Uganda to the north, Rwanda, Burundi, and the Democratic Republic of the Congo to the west, and Zambia, Malawi, and Mozambique to the south. The country's eastern borders lie on the Indian Ocean.Tanzania is a state...
and Mozambique
Mozambique
Mozambique, officially the Republic of Mozambique , is a country in southeastern Africa bordered by the Indian Ocean to the east, Tanzania to the north, Malawi and Zambia to the northwest, Zimbabwe to the west and Swaziland and South Africa to the southwest...
. They are mainly united by culture and under the mother tongue of Kiswahili, a Bantu language. This also extends to Arab, Persian, and other migrants who reached the coast some believe as early as the 7th-8th c. CE, and mixed with the local people there, providing considerable cultural infusion and numerous loan words from Arabic and Persian
Persian language
Persian is an Iranian language within the Indo-Iranian branch of the Indo-European languages. It is primarily spoken in Iran, Afghanistan, Tajikistan and countries which historically came under Persian influence...
. Archaeologist, Felix Chami notes the presence of Bantu settlements straddling the East African coast as early as the beginning of the 1st millennium
1st millennium
File:1st millennium montage.png|From left, clockwise: Depiction of Jesus, the central figure in Christianity; The Colosseum, a landmark of the once Roman Empire; Gunpowder is invented during the latter part of the millennium, in China; Chess, a new board game, takes on popularity across the globe;...
. They evolved gradually from the 6th century onward to accommodate for an increase in trade (mainly with Arab merchants), population growth, and further centralized urbanization; developing into what would later become known as the Swahili City-States. 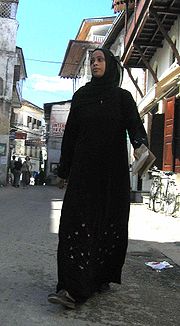 Islam
Islam
Islam . The most common are and .   : Arabic pronunciation varies regionally. The first vowel ranges from ~~. The second vowel ranges from ~~~...
established its presence in the East African coast from around the early 2nd millennium AD, when Bantu traders settling on the coast tapped into the Indian Ocean trade networks. Because of the interactions that ensued with the wider world, Islam emerged as a unifying force on the coast and helped to form a unique Swahili identity. The Swahili follow a very strict and orthodox form of Islam. For example, Eid-ul-Fitr, the holiday marking the end of Ramadan, is widely celebrated in areas where the Swahili form a majority. Further, large numbers of Swahili undertake the Hajj and Umrah from Tanzania, Kenya, and Mozambique. Traditional Islamic dress such as the jilbab
Jilbab
The term jilbāb or jilbaab is the plural of the word jilaabah which refers to any long and loose-fit coat or garment worn by some Muslim women. They believe that this definition of jilbab fulfills the Quranic demand for a Hijab...
and thob is also popular among the Swahili. In addition to more orthodox practices, the Swahili also are known for their use of divination, which has adopted some syncretic features from underlying traditional indigenous beliefs. In addition to orthodox beliefs in jinn
Jinn
Jinn are supernatural beings in Arab folklore and Islamic teachings.Jinn may also refer to:* Jinn , a Japanese band* Qui-Gon Jinn, a character in the Star Wars universe...
, many Swahili men wear protective amulets around their necks, which contain verses from the Koran. Divination
Divination
Divination is the attempt to gain insight into a question or situation by way of an occultic standardized process or ritual...
is practiced through Koranic readings. Often the diviner incorporates verses from the Qu'ran into treatments for certain diseases. On occasion, he instructs a patient to soak a piece of paper containing verses of the Qu'ran in water. With this ink infused water, literally containing the word of Allah, the patient will then wash his body or drink it to cure himself of his affliction. It is only prophets and teachers of Islam who are permitted to become medicine men among the Swahili.

For centuries the Swahili depended greatly on trade from the Indian Ocean. The Swahili have played a vital role as middle man between east, central and South Africa, and the outside world. Trade contacts have been noted as early as 100 AD. by early Roman
Roman Empire
The Roman Empire was the post-Republican period of the ancient Roman civilization, characterised by an autocratic form of government and large territorial holdings in Europe and around the Mediterranean....
writers who visited the East African coast in the first century. Trade routes extended across Tanzania into modern day Zaire, along which goods were brought to the coasts and were sold to Arab, Indian, and Portuguese traders. Materials attributed to this network of trade were also found at Great Zimbabwe
Great Zimbabwe
Great Zimbabwe is a ruined city that was once the capital of the Kingdom of Zimbabwe, which existed from 1100 to 1450 C.E. during the country’s Late Iron Age. The monument, which first began to be constructed in the 11th century and which continued to be built until the 14th century, spanned an...
. During the apogee of the Middle Ages, ivory and slaves became a substantial source of revenue. Many slaves sold in Zanzibar ended up in Brazil, which was then a Portuguese colony. Swahili fishermen of today still rely on the ocean to supply their primary source of income. Fish is sold to their inland neighbors in exchange for products of the interior.

Previously thought by many scholars to be essentially of Arab
Arab
Arab people, also known as Arabs , are a panethnicity primarily living in the Arab world, which is located in Western Asia and North Africa. They are identified as such on one or more of genealogical, linguistic, or cultural grounds, with tribal affiliations, and intra-tribal relationships playing...
ic or Persian style and origin; archaeological, written, linguistic, and cultural evidence instead suggests a predominantly African genesis and sustainment. This would be accompanied later by an enduring Arabic and Islamic influence in the form of trade, inter-marriage, and an exchange of ideas. Upon visiting Kilwa
Kilwa Kisiwani
Kilwa Kisiwani is a community on an island off the coast of East Africa, in present day Tanzania.- History :A document written around AD 1200 called al-Maqama al Kilwiyya discovered in Oman, gives details of a mission to reconvert Kilwa to Ibadism, as it had recently been effected by the Ghurabiyya...
in 1331, the great Berber
Berber people
Berbers are the indigenous peoples of North Africa west of the Nile Valley. They are continuously distributed from the Atlantic to the Siwa oasis, in Egypt, and from the Mediterranean to the Niger River. Historically they spoke the Berber language or varieties of it, which together form a branch...
explorer Ibn Battuta
Ibn Battuta
Abu Abdullah Muhammad Ibn Battuta , or simply Ibn Battuta, also known as Shams ad–Din , was a Muslim Moroccan Berber explorer, known for his extensive travels published in the Rihla...
was impressed by the substantial beauty that he encountered there. He describes its inhabitants as "Zanj, jet-black in colour, and with tattoo marks on their faces", and notes that "Kilwa is a very fine and substantially built town, and all its buildings are of wood" (his description of Mombasa
Mombasa
Mombasa is the second-largest city in Kenya. Lying next to the Indian Ocean, it has a major port and an international airport. The city also serves as the centre of the coastal tourism industry....
was essentially the same). Kimaryo points out that the distinctive tattoo marks are common among the Makonde
Makonde
The Makonde are an ethnic group in southeast Tanzania and northern Mozambique. The Makonde developed their culture on the Mueda Plateau in Mozambique. At present they live throughout Tanzania and Mozambique and have a small presence in Kenya...
. Architecture included arches, courtyards, isolated women's quarters, the mihrab
Mihrab
A mihrab is semicircular niche in the wall of a mosque that indicates the qibla; that is, the direction of the Kaaba in Mecca and hence the direction that Muslims should face when praying...
, towers, and decorative elements on the buildings themselves. Many ruins may still be observed near the southern Kenyan port of Malindi
Malindi
Malindi is a town on Malindi Bay at the mouth of the Galana River, lying on the Indian Ocean coast of Kenya. It is 120 kilometres northeast of Mombasa. The population of Malindi is 117,735 . It is the capital of the Malindi District.Tourism is the major industry in Malindi. The city is...
in the Gede
Gede
Gede is a village on the Indian Ocean coast of Kenya, lying south of Malindi and north of Watamu. The Ruins of Gedi are located there...
ruins (the lost city of Gede/Gedi).