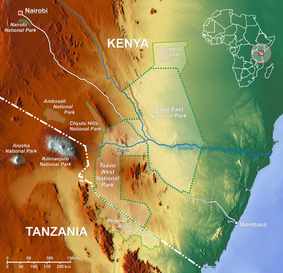 Athi-Galana-Sabaki River is the second longest river in Kenya
Kenya
Kenya , officially known as the Republic of Kenya, is a country in East Africa that lies on the equator, with the Indian Ocean to its south-east...
(after the Tana River
Tana River (Kenya)
The long Tana River is the longest river in Kenya, and gives its name to the Tana River District. Its tributaries include the Thika. The river rises in the Aberdare Mountains to the west of Nyeri. Initially it runs east before turning south around the massif of Mount Kenya. The river then runs...
). It has a total length of 390 km, and drains a basin area of 70,000 km². The river rises at 1° 42' S. as Athi River and enters the Indian Ocean
Indian Ocean
The Indian Ocean is the third largest of the world's oceanic divisions, covering approximately 20% of the water on the Earth's surface. It is bounded on the north by the Indian Subcontinent and Arabian Peninsula ; on the west by eastern Africa; on the east by Indochina, the Sunda Islands, and...
as Galana River (also known as Sabaki River).

Athi River flows across the Kapote and Athi plains, through the Athi River
Athi River (town)
Athi River is a town outside Nairobi, Kenya in Eastern Province. It is also known as Mavoko. The town hosts Mavoko municipal council and headquarters of Mavoko division which is part of the Machakos District...
town, takes a northeast direction and is met by the Nairobi River
Nairobi River
Nairobi River is a river flowing through the Kenyan capital Nairobi. It is the main river of the Nairobi river basin, a complex of several parallel streams flowing eastwards. All of the Nairobi basin rivers join east of Nairobi and meet the Athi River, eventually flowing to the Indian ocean. These...
. Near Thika
Thika
Thika is an industrial town in Central Province, Kenya, lying on the A2 road 40 km north east of Nairobi, near the confluence of Thika River & Chania River. Thika has a population of 200,000and is growing rapidly, as is the entire greater Nairobi area...
it forms the Fourteen Falls and turns south-south-east under the wooded slopes of the Yatta ridge, which shuts in its basin on the east. Apart from the numerous small feeders of the upper river, almost the only tributary
Tributary
A tributary or affluent is a stream or river that flows into a main stem river or a lake. A tributary does not flow directly into a sea or ocean...
is the Tsavo River
Tsavo River
The Tsavo River runs east from the western end of the Tsavo National Park of Kenya, near the border of Tanzania, until it joins with the Athi River, forming the Galana River near the center of the park. This river is the main contributor to the watershed of the lower portion of the park region, and...
, from the east side of Kilimanjaro, which enters in about 3° S. It turns east, and in its lower course, known as the Sabaki (or Galana), traverses the sterile
Infertility
Infertility primarily refers to the biological inability of a person to contribute to conception. Infertility may also refer to the state of a woman who is unable to carry a pregnancy to full term...
quartz
Quartz
Quartz is the second-most-abundant mineral in the Earth's continental crust, after feldspar. It is made up of a continuous framework of SiO4 silicon–oxygen tetrahedra, with each oxygen being shared between two tetrahedra, giving an overall formula SiO2. There are many different varieties of quartz,...
-land of the outer plateau
Plateau
In geology and earth science, a plateau , also called a high plain or tableland, is an area of highland, usually consisting of relatively flat terrain. A highly eroded plateau is called a dissected plateau...
. The valley is in parts low and flat, covered with forest and scrub, and containing small lakes and backwaters connected with the river in the rains. At this season the stream, which rises as much as 10 m in places, is deep and strong and of a turbid yellow colour; but navigation is interrupted by the Lugard falls, which is actually a series of rapids. Onwards it flows east and enters the Indian Ocean in 30 12' S., just north of Malindi
Malindi
Malindi is a town on Malindi Bay at the mouth of the Galana River, lying on the Indian Ocean coast of Kenya. It is 120 kilometres northeast of Mombasa. The population of Malindi is 117,735 . It is the capital of the Malindi District.Tourism is the major industry in Malindi. The city is...
.

The river flows through the Tsavo East National Park
Tsavo East National Park
Tsavo East National Park is one of the oldest and largest parks in Kenya at 11,747 square kilometres. Opened in April 1948, it is located near the village of Voi in the Taita-Taveta District of Coast Province. The park is divided into east and west sections by the A109 road and a railway...
and attracts diverse wildlife, including hippopotamus
Hippopotamus
The hippopotamus , or hippo, from the ancient Greek for "river horse" , is a large, mostly herbivorous mammal in sub-Saharan Africa, and one of only two extant species in the family Hippopotamidae After the elephant and rhinoceros, the hippopotamus is the third largest land mammal and the heaviest...
and crocodile
Crocodile
A crocodile is any species belonging to the family Crocodylidae . The term can also be used more loosely to include all extant members of the order Crocodilia: i.e...
s.
The source of this article is wikipedia, the free encyclopedia.  The text of this article is licensed under the GFDL.