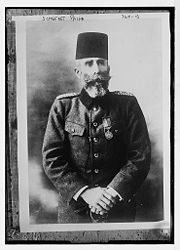 Mahmud Shevket Pasha was an Ottoman
Ottoman Turks
The Ottoman Turks were the Turkish-speaking population of the Ottoman Empire who formed the base of the state's military and ruling classes. Reliable information about the early history of Ottoman Turks is scarce, but they take their Turkish name, Osmanlı , from the house of Osman I The Ottoman...
general
General
A general officer is an officer of high military rank, usually in the army, and in some nations, the air force. The term is widely used by many nations of the world, and when a country uses a different term, there is an equivalent title given....
and statesman
Statesman
A statesman is usually a politician or other notable public figure who has had a long and respected career in politics or government at the national and international level. As a term of respect, it is usually left to supporters or commentators to use the term...
of Arab and Georgian
Georgia (country)
Georgia is a sovereign state in the Caucasus region of Eurasia. Located at the crossroads of Western Asia and Eastern Europe, it is bounded to the west by the Black Sea, to the north by Russia, to the southwest by Turkey, to the south by Armenia, and to the southeast by Azerbaijan. The capital of...
descent. Some sources also note Chechen or Circassian ancestry. He was born in Baghdad
Baghdad
Baghdad is the capital of Iraq, as well as the coterminous Baghdad Governorate. The population of Baghdad in 2011 is approximately 7,216,040...
where he finished his primary education before going on to the Military Academy in Constantinople
Istanbul
Istanbul , historically known as Byzantium and Constantinople , is the largest city of Turkey. Istanbul metropolitan province had 13.26 million people living in it as of December, 2010, which is 18% of Turkey's population and the 3rd largest metropolitan area in Europe after London and...
. He joined the army in 1882 as lieutenant. He spent some time in France investigating military technology and was stationed in Crete
Crete
Crete is the largest and most populous of the Greek islands, the fifth largest island in the Mediterranean Sea, and one of the thirteen administrative regions of Greece. It forms a significant part of the economy and cultural heritage of Greece while retaining its own local cultural traits...
for a while. Then he returned to Military Academy as a faculty member.

He played an important role in ending the 31 March Incident and the reign of Abdul Hamid II
Abdul Hamid II
His Imperial Majesty, The Sultan Abdülhamid II, Emperor of the Ottomans, Caliph of the Faithful was the 34th sultan of the Ottoman Empire...
. He served as a Grand Vizier
Grand Vizier
Grand Vizier, in Turkish Vezir-i Azam or Sadr-ı Azam , deriving from the Arabic word vizier , was the greatest minister of the Sultan, with absolute power of attorney and, in principle, dismissable only by the Sultan himself...
to Mehmed V
Mehmed V
Mehmed V Reshad was the 35th Ottoman Sultan. He was the son of Sultan Abdülmecid I. He was succeeded by his half-brother Mehmed VI.-Birth:...
, between 23 January 1913 and 15 June 1913, when he was assassinated in Constantinople. Among other things, he is credited with the creation of the Ottoman military aviation in 1911 and bringing the first automobile to Constantinople.
The source of this article is wikipedia, the free encyclopedia.  The text of this article is licensed under the GFDL.