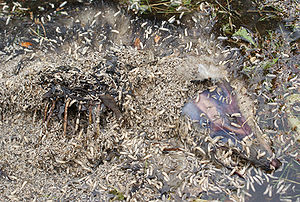 Maggot-like fly larvae are of wide importance in ecology, economy, and medicine; among other roles, various species are prominent in recycling carrion and garbage, attacking crops
Tephritidae
Tephritidae is one of two fly families referred to as "fruit flies", the other family being Drosophilidae. Tephritidae does not include the biological model organisms of the genus Drosophila , which is often called the "common fruit fly". There are nearly 5,000 described species of tephritid...
and foodstuffs
Cheese fly
Cheese flies are members of the family Piophilidae of flies. Most are scavengers in animal products and fungi. The best-known member of the family is Piophila casei. It is a small fly, about four mm long, found worldwide. The fly's larva infests cured meats, smoked fish, cheeses, and decaying...
, spreading microbial infections, and causing myiasis
Myiasis
Myiasis is a general term for infection by parasitic fly larvae feeding on the host's necrotic or living tissue. Colloquialisms for myiasis include flystrike, blowfly strike, and fly-blown. In Greek, "myia" means fly....
.

Angler
Fisherman
A fisherman or fisher is someone who captures fish and other animals from a body of water, or gathers shellfish. Worldwide, there are about 38 million commercial and subsistence fishermen and fish farmers. The term can also be applied to recreational fishermen and may be used to describe both men...
s use maggots usually provided by commercial suppliers to catch non-predatory fish.
Maggots are the most popular bait for anglers in Europe
Europe
Europe is, by convention, one of the world's seven continents. Comprising the westernmost peninsula of Eurasia, Europe is generally 'divided' from Asia to its east by the watershed divides of the Ural and Caucasus Mountains, the Ural River, the Caspian and Black Seas, and the waterways connecting...
. Anglers throw handfuls into the "swim" they are targeting, attracting the fish to the area. The angler will then use the largest or "perceived" most attractive maggots on the hook, hoping to be irresistible to the fish.

In North America, maggots have been used for years mainly as ice fishing bait; recently, however, anglers have started using them year-round. 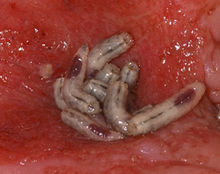 Certain live maggots have been employed since antiquity as an economical, safe and effective type of wound debridement
Debridement
Debridement is the medical removal of a patient's dead, damaged, or infected tissue to improve the healing potential of the remaining healthy tissue...
. In controlled and sterile settings by licensed medical practitioners, maggot therapy
Maggot therapy
Maggot therapy is a type of biotherapy involving the intentional introduction of live, disinfected maggots into the non-healing skin and soft tissue wound of a human or animal for the purpose of cleaning out the...
introduces live, disinfected maggots into non-healing skin or soft wounds of a human or other animal. They feed on the necrotic
Necrosis
Necrosis is the premature death of cells in living tissue. Necrosis is caused by factors external to the cell or tissue, such as infection, toxins, or trauma. This is in contrast to apoptosis, which is a naturally occurring cause of cellular death...
tissue, leaving live tissue largely unharmed. It is uncertain to what degree maggot secretions have any effect on bacterial growth, which or how useful any bacteriostatic effects might be, since different studies have produced contradictory results, and some species of bacteria may be naturally resistant to maggot secretions. As of 2008, maggot therapy was being used in around 1,000 medical centers in Europe and over 800 medical centers in the United States
United States
The United States of America is a federal constitutional republic comprising fifty states and a federal district...
.

As with flea
Flea
Flea is the common name for insects of the order Siphonaptera which are wingless insects with mouthparts adapted for piercing skin and sucking blood...
s and tick
Tick
Ticks are small arachnids in the order Ixodida, along with mites, constitute the subclass Acarina. Ticks are ectoparasites , living by hematophagy on the blood of mammals, birds, and sometimes reptiles and amphibians...
s, maggots can be a threat to household pets and livestock
Livestock
Livestock refers to one or more domesticated animals raised in an agricultural setting to produce commodities such as food, fiber and labor. The term "livestock" as used in this article does not include poultry or farmed fish; however the inclusion of these, especially poultry, within the meaning...
, especially sheep. Flies reproduce rapidly in the summer months and maggots can come in large numbers, creating a maggot infestation and a high risk of myiasis
Myiasis
Myiasis is a general term for infection by parasitic fly larvae feeding on the host's necrotic or living tissue. Colloquialisms for myiasis include flystrike, blowfly strike, and fly-blown. In Greek, "myia" means fly....
in sheep and other animals. Humans are not immune to the feeding habits of maggots and can also contract myiasis. Interaction between humans and maggots usually occurs near garbage cans, dead animals, rotten food and other breeding grounds for maggots.

A major problem arises when maggots mature into adult flies and start the life cycle over again. Within a few generations the number of maggots grows exponentially
Exponential growth
Exponential growth occurs when the growth rate of a mathematical function is proportional to the function's current value...
and becomes a serious problem. Professionals can remove maggots or many over-the-counter bug sprays can be used to deter flies and maggots. Keeping garbage
Waste
Waste is unwanted or useless materials. In biology, waste is any of the many unwanted substances or toxins that are expelled from living organisms, metabolic waste; such as urea, sweat or feces. Litter is waste which has been disposed of improperly...
in a sealed container and using a garbage disposal
Garbage disposal
A garbage disposal unit or waste disposal unit is a device, usually electrically powered, installed under a kitchen sink between the sink's drain and the trap which shreds food waste into pieces small enough—generally less than —to pass through plumbing.Garbage disposal units are widely used in...
or freezing rotting leftovers until waste collection day helps prevent infestation. Sometimes introducing an environmental control, such as Histeridae, also help reduce maggot populations.