Encyclopedia
The Magdalenian refers to one of the later culture
Archaeological culture
An archaeological culture is a recurring assemblage of artifacts from a specific time and place, which are thought to constitute the material culture remains of a particular past human society. The connection between the artifacts is based on archaeologists' understanding and interpretation and...
s of the Upper Paleolithic
Upper Paleolithic
The Upper Paleolithic is the third and last subdivision of the Paleolithic or Old Stone Age as it is understood in Europe, Africa and Asia. Very broadly it dates to between 40,000 and 10,000 years ago, roughly coinciding with the appearance of behavioral modernity and before the advent of...
in western Europe
Western Europe
Western Europe is a loose term for the collection of countries in the western most region of the European continents, though this definition is context-dependent and carries cultural and political connotations. One definition describes Western Europe as a geographic entity—the region lying in the...
, dating from around 17,000 BP
Before Present
Before Present years is a time scale used in archaeology, geology, and other scientific disciplines to specify when events in the past occurred. Because the "present" time changes, standard practice is to use AD 1950 as the origin of the age scale, reflecting the fact that radiocarbon...
to 9,000 BP. It is named after the type site
Type site
In archaeology a type site is a site that is considered the model of a particular archaeological culture...
of La Madeleine, a rock shelter located in the Vézère valley, commune of Tursac
Tursac
Tursac is a commune in the Dordogne department in Aquitaine in southwestern France. Abri de la Madeleine is the site of Magdalenian prehistoric finds.-Population:-External links:* *...
, in the Dordogne
Dordogne
Dordogne is a départment in south-west France. The départment is located in the region of Aquitaine, between the Loire valley and the High Pyrénées named after the great river Dordogne that runs through it...
department of France
France
The French Republic , The French Republic , The French Republic , (commonly known as France , is a unitary semi-presidential republic in Western Europe with several overseas territories and islands located on other continents and in the Indian, Pacific, and Atlantic oceans. Metropolitan France...
.

Originally termed "L'âge du renne" (the Age of the Reindeer) by Édouard Lartet
Édouard Lartet
Édouard Lartet was a French paleontologist.-Biography:Lartet was born near Castelnau-Barbarens, of Gers, France, where his family had lived for more than five hundred years. He was educated for the law at Auch and Toulouse, but having private means elected to devote himself to science...
& Henry Christy
Henry Christy
Henry Christy was an English banker and collector who left his substantial collections to the British Museum.-Early life:...
, the first systematic excavators of the type site, in their publication of 1875, the Magdalenian is synonymous in many people's minds with reindeer hunters, although Magdalenian sites also contain extensive evidence for the hunting of red deer, horse and other large mammals present in Europe
Europe
Europe is, by convention, one of the world's seven continents. Comprising the westernmost peninsula of Eurasia, Europe is generally 'divided' from Asia to its east by the watershed divides of the Ural and Caucasus Mountains, the Ural River, the Caspian and Black Seas, and the waterways connecting...
towards the end of the last ice age
Ice age
An ice age or, more precisely, glacial age, is a generic geological period of long-term reduction in the temperature of the Earth's surface and atmosphere, resulting in the presence or expansion of continental ice sheets, polar ice sheets and alpine glaciers...
. The culture was geographically widespread, and later Magdalenian sites have been found from Portugal
Portugal
Portugal , officially the Portuguese Republic is a country situated in southwestern Europe on the Iberian Peninsula. Portugal is the westernmost country of Europe, and is bordered by the Atlantic Ocean to the West and South and by Spain to the North and East. The Atlantic archipelagos of the...
in the west to Poland
Poland
Poland , officially the Republic of Poland , is a country in Central Europe bordered by Germany to the west; the Czech Republic and Slovakia to the south; Ukraine, Belarus and Lithuania to the east; and the Baltic Sea and Kaliningrad Oblast, a Russian exclave, to the north...
in the east.

The culture spans the period between c. 18,000 and 10,000 BP, towards the end of the last ice age
Ice age
An ice age or, more precisely, glacial age, is a generic geological period of long-term reduction in the temperature of the Earth's surface and atmosphere, resulting in the presence or expansion of continental ice sheets, polar ice sheets and alpine glaciers...
. The Magdalenien is characterised by regular blade
Blade
A blade is that portion of a tool, weapon, or machine with a cutting edge and/or a pointed tip that is designed to cut and/or puncture, stab, slash, chop, slice, thrust, or scrape animate or inanimate surfaces or materials...
industries struck from carinated cores. Typologically the Magdalenian is divided into six phases which are generally agreed to have chronological significance. The earliest phases are recognised by the varying proportion of blades and specific varieties of scrapers, the middle phases marked by the emergence of a microlithic component (particularly the distinctive denticulated microliths) and the later phases by the presence of uniserial (phase 5) and biserial 'harpoons' (phase 6) made of bone, antler and ivory. 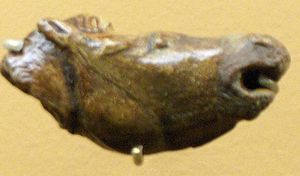 By the end of the Magdalenian, the lithic technology shows a pronounced trend towards increased microlithisation. The bone harpoons and points have the most distinctive chronological markers within the typological sequence. As well as flint tools, the Magdalenians are best known for their elaborate worked bone, antler and ivory
Ivory
Ivory is a term for dentine, which constitutes the bulk of the teeth and tusks of animals, when used as a material for art or manufacturing. Ivory has been important since ancient times for making a range of items, from ivory carvings to false teeth, fans, dominoes, joint tubes, piano keys and...
which served both functional and aesthetic purposes including perforated batons
Bâton de commandement
A bâton de commandement, bâton percé or perforated baton is a name given by archaeologists to a particular prehistoric artifact of uncertain function...
. Examples of Magdalenian portable art include batons, figurines
Figurines
Figurines is an indie rock band from Denmark, formed in the mid-1990s. The band released their first EP, The Detour, in 2001 and their first full-length album, Shake a Mountain, in 2004. The band began to receive national attention in Denmark around the time of the full-length release, and began...
and intricately engraved projectile points, as well as items of personal adornment including sea shells, perforated carnivore
Carnivore
A carnivore meaning 'meat eater' is an organism that derives its energy and nutrient requirements from a diet consisting mainly or exclusively of animal tissue, whether through predation or scavenging...
teeth (presumably necklaces) and fossils.

The sea shells and fossils found in Magdalenian sites can be sourced to relatively precise areas of origin, and so have been used to support hypothesis of Magdalenian hunter-gatherer seasonal ranges, and perhaps trade routes. Cave sites such as the world famous Lascaux
Lascaux
Lascaux is the setting of a complex of caves in southwestern France famous for its Paleolithic cave paintings. The original caves are located near the village of Montignac, in the department of Dordogne. They contain some of the best-known Upper Paleolithic art. These paintings are estimated to be...
contain the best known examples of Magdalenian cave art. The site of Altamira
Altamira (cave)
Altamira is a cave in Spain famous for its Upper Paleolithic cave paintings featuring drawings and polychrome rock paintings of wild mammals and human hands....
in Spain, with its extensive and varied forms of Magdalenian mobillary art has been suggested to be an agglomeration site where multiple small groups of Magdalenian hunter-gatherers congregated.

In northern Spain
Spain
Spain , officially the Kingdom of Spain languages]] under the European Charter for Regional or Minority Languages. In each of these, Spain's official name is as follows:;;;;;;), is a country and member state of the European Union located in southwestern Europe on the Iberian Peninsula...
and south west France
France
The French Republic , The French Republic , The French Republic , (commonly known as France , is a unitary semi-presidential republic in Western Europe with several overseas territories and islands located on other continents and in the Indian, Pacific, and Atlantic oceans. Metropolitan France...
it was superseded by the Azilian
Azilian
The Azilian is a name given by archaeologists to an industry of the Epipaleolithic in northern Spain and southern France.It probably dates to the period of the Allerød Oscillation around 10,000 years ago and followed the Magdalenian culture...
culture. In northern Europe we see a slightly different picture, with different variants of the Tjongerian techno-complex following it. It has been suggested that key Late Glacial sites in south-western Britain can also be attributed to the Magdalenian, including the famous site of Kent's Cavern
Kent's Cavern
Kents Cavern is a cave system in Torquay, Devon, England. It is notable for its archaeological and geological features. The caves are a geological Site of Special Scientific Interest and a Scheduled Ancient Monument , and are open to the public.-Prehistory:The caverns and passages at the site were...
, although this remains open to debate.

In the movie The Man from Earth
The Man from Earth
The Man from Earth is a 2007 science fiction film written by Jerome Bixby and directed by Richard Schenkman. The film stars David Lee Smith as John Oldman, the protagonist of the story. The screenplay for this movie was conceived by Jerome Bixby in the early 1960s and was completed on his death bed...
, the protagonist claims that he is a 14000 year old Magdalenian i.e., Cro-Magnon
Cro-Magnon
The Cro-Magnon were the first early modern humans of the European Upper Paleolithic. The earliest known remains of Cro-Magnon-like humans are radiometrically dated to 35,000 years before present....
.