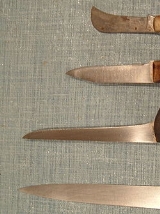 Overview
A blade is that portion of a tool
Tool
A tool is a device that can be used to produce an item or achieve a task, but that is not consumed in the process. Informally the word is also used to describe a procedure or process with a specific purpose. Tools that are used in particular fields or activities may have different designations such...
, weapon
Weapon
A weapon, arm, or armament is a tool or instrument used with the aim of causing damage or harm to living beings or artificial structures or systems...
, or machine
Machine
A machine manages power to accomplish a task, examples include, a mechanical system, a computing system, an electronic system, and a molecular machine. In common usage, the meaning is that of a device having parts that perform or assist in performing any type of work...
with a cutting edge and/or a pointed tip that is designed to cut and/or puncture, stab, slash, chop, slice, thrust, or scrape animate or inanimate surfaces or materials. A blade may be made from a flaking stone, such as flint
Flint
Flint is a hard, sedimentary cryptocrystalline form of the mineral quartz, categorized as a variety of chert. It occurs chiefly as nodules and masses in sedimentary rocks, such as chalks and limestones. Inside the nodule, flint is usually dark grey, black, green, white, or brown in colour, and...
, metal (usually steel
Steel
Steel is an alloy that consists mostly of iron and has a carbon content between 0.2% and 2.1% by weight, depending on the grade. Carbon is the most common alloying material for iron, but various other alloying elements are used, such as manganese, chromium, vanadium, and tungsten...
), ceramic
Ceramic
A ceramic is an inorganic, nonmetallic solid prepared by the action of heat and subsequent cooling. Ceramic materials may have a crystalline or partly crystalline structure, or may be amorphous...
, or other material.
Blades are used for utility purposes (food preparation, craftwork, outdoors sport, etc.) and for combat.

When used for food preparation, the main uses are slicing (cutting by drawing the blade across the object, applying light pressure) and chopping (cutting by pushing the blade through object), with some piercing (using the tip to cut through the surface).

In combat, a blade may be used to slash (i.e.

Some motherfuckers are always trying to ice-skate uphill.

You better wake up. The world you live in is just a sugar-coated topping. There is another world beneath it - the real world. And if you want to survive it, you better [shouts] learn to pull the trigger!

Say what you want, but I promise you, you will be dead by dawn.

Motherfucker, are you outta yo damn mind?!? [said while cops shoot at HIM after a charred vampire just escaped a hospital]

When you understand the nature of a thing, you know what it's capable of.

You know, my mother used to say: A cold heart is a dead heart.

You may wake up one day and find yourself extinct.

Tonight, the age of man comes to an end.