Encyclopedia
A macromolecule is a very large molecule
Molecule
A molecule is an electrically neutral group of at least two atoms held together by covalent chemical bonds. Molecules are distinguished from ions by their electrical charge...
commonly created by some form of polymerization
Polymerization
In polymer chemistry, polymerization is a process of reacting monomer molecules together in a chemical reaction to form three-dimensional networks or polymer chains...
. In biochemistry
Biochemistry
Biochemistry, sometimes called biological chemistry, is the study of chemical processes in living organisms, including, but not limited to, living matter. Biochemistry governs all living organisms and living processes...
, the term is applied to the four conventional biopolymers (nucleic acid
Nucleic acid
Nucleic acids are biological molecules essential for life, and include DNA and RNA . Together with proteins, nucleic acids make up the most important macromolecules; each is found in abundance in all living things, where they function in encoding, transmitting and expressing genetic information...
s, protein
Protein
Proteins are biochemical compounds consisting of one or more polypeptides typically folded into a globular or fibrous form, facilitating a biological function. A polypeptide is a single linear polymer chain of amino acids bonded together by peptide bonds between the carboxyl and amino groups of...
s, carbohydrate
Carbohydrate
A carbohydrate is an organic compound with the empirical formula ; that is, consists only of carbon, hydrogen, and oxygen, with a hydrogen:oxygen atom ratio of 2:1 . However, there are exceptions to this. One common example would be deoxyribose, a component of DNA, which has the empirical...
s, and lipid
Lipid
Lipids constitute a broad group of naturally occurring molecules that include fats, waxes, sterols, fat-soluble vitamins , monoglycerides, diglycerides, triglycerides, phospholipids, and others...
s), as well as non-polymeric molecules with large molecular mass such as macrocycles. The constituent molecules from which macromolecules are assembled are called monomers (mono=single, meros=part).

The term macromolecule was coined by Nobel laureate
Nobel Prize
The Nobel Prizes are annual international awards bestowed by Scandinavian committees in recognition of cultural and scientific advances. The will of the Swedish chemist Alfred Nobel, the inventor of dynamite, established the prizes in 1895...
Hermann Staudinger
Hermann Staudinger
- External links :* Staudinger's * Staudinger's Nobel Lecture *....
in the 1920s, although his first relevant publication on this field only mentions high molecular compounds (in excess of 1,000 atoms). At that time the phrase polymer as introduced by Berzelius
Jöns Jakob Berzelius
Jöns Jacob Berzelius was a Swedish chemist. He worked out the modern technique of chemical formula notation, and is together with John Dalton, Antoine Lavoisier, and Robert Boyle considered a father of modern chemistry...
in 1833 had a different meaning from that of today: it simply was another form of isomerism for example with benzene
Benzene
Benzene is an organic chemical compound. It is composed of 6 carbon atoms in a ring, with 1 hydrogen atom attached to each carbon atom, with the molecular formula C6H6....
and acetylene
Acetylene
Acetylene is the chemical compound with the formula C2H2. It is a hydrocarbon and the simplest alkyne. This colorless gas is widely used as a fuel and a chemical building block. It is unstable in pure form and thus is usually handled as a solution.As an alkyne, acetylene is unsaturated because...
and had little to do with size.

Usage of the term to describe large molecules varies among the disciplines. For example, while biology
Biology
Biology is a natural science concerned with the study of life and living organisms, including their structure, function, growth, origin, evolution, distribution, and taxonomy. Biology is a vast subject containing many subdivisions, topics, and disciplines...
refers to macromolecules as the four large molecules comprising living things, in chemistry
Chemistry
Chemistry is the science of matter, especially its chemical reactions, but also its composition, structure and properties. Chemistry is concerned with atoms and their interactions with other atoms, and particularly with the properties of chemical bonds....
, the term may refer to aggregates of two or more macromolecules held together by intermolecular force
Intermolecular force
Intermolecular forces are forces of attraction or repulsion which act between neighboring particles: atoms, molecules or ions. They are weak compared to the intramolecular forces, the forces which keep a molecule together...
s rather than covalent bond
Covalent bond
A covalent bond is a form of chemical bonding that is characterized by the sharing of pairs of electrons between atoms. The stable balance of attractive and repulsive forces between atoms when they share electrons is known as covalent bonding....
s but which do not readily dissociate.

According to the standard IUPAC definition, the term macromolecule as used in polymer science refers only to a single molecule. For example,a single polymeric molecule is appropriately described as a "macromolecule" or "polymer molecule" rather than a "polymer", which suggests a substance
Chemical substance
In chemistry, a chemical substance is a form of matter that has constant chemical composition and characteristic properties. It cannot be separated into components by physical separation methods, i.e. without breaking chemical bonds. They can be solids, liquids or gases.Chemical substances are...
composed of macromolecules. 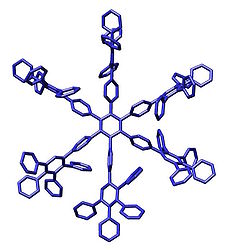 Because of their size, macromolecules are not conveniently described in terms of stoichiometry
Stoichiometry
Stoichiometry is a branch of chemistry that deals with the relative quantities of reactants and products in chemical reactions. In a balanced chemical reaction, the relations among quantities of reactants and products typically form a ratio of whole numbers...
alone. The structure of simple macromolecules, such as homopolymers, may be described in terms of the individual monomer subunit and total molecular mass
Molecular mass
The molecular mass of a substance is the mass of one molecule of that substance, in unified atomic mass unit u...
. Complicated biomacromolecules, on the other hand, require multi-faceted structural description such as the hierarchy of structures used to describe proteins.

Substances that are composed of macromolecules often have unusual physical properties. Although too small to see, individual pieces of DNA
DNA
Deoxyribonucleic acid is a nucleic acid that contains the genetic instructions used in the development and functioning of all known living organisms . The DNA segments that carry this genetic information are called genes, but other DNA sequences have structural purposes, or are involved in...
in solution can be broken in two simply by sectioning the solution through an ordinary straw. This is not true of smaller molecules. The 1964 edition of Linus Pauling
Linus Pauling
Linus Carl Pauling was an American chemist, biochemist, peace activist, author, and educator. He was one of the most influential chemists in history and ranks among the most important scientists of the 20th century...
's College Chemistry asserted that DNA in nature is never longer than about 5,000 base pair
Base pair
In molecular biology and genetics, the linking between two nitrogenous bases on opposite complementary DNA or certain types of RNA strands that are connected via hydrogen bonds is called a base pair...
s. They made this mistake because biochemists were inadvertently and consistently breaking their samples into pieces. In fact, the DNA of chromosome
Chromosome
A chromosome is an organized structure of DNA and protein found in cells. It is a single piece of coiled DNA containing many genes, regulatory elements and other nucleotide sequences. Chromosomes also contain DNA-bound proteins, which serve to package the DNA and control its functions.Chromosomes...
s can be hundreds of millions of base pairs long.

Another common macromolecular property that does not characterize smaller molecules is the need for assistance in dissolving into solution. Many require salts or particular ion
Ion
An ion is an atom or molecule in which the total number of electrons is not equal to the total number of protons, giving it a net positive or negative electrical charge. The name was given by physicist Michael Faraday for the substances that allow a current to pass between electrodes in a...
s to dissolve in water. Proteins will denature
Denaturation (biochemistry)
Denaturation is a process in which proteins or nucleic acids lose their tertiary structure and secondary structure by application of some external stress or compound, such as a strong acid or base, a concentrated inorganic salt, an organic solvent , or heat...
if the solute concentration of their solution is too high or too low.

High concentrations of macromolecules in a solution can alter the rates
Reaction rate
The reaction rate or speed of reaction for a reactant or product in a particular reaction is intuitively defined as how fast or slow a reaction takes place...
and equilibrium constants of the reactions of other macromolecules, through an effect known as macromolecular crowding
Macromolecular crowding
The phenomenon of macromolecular crowding alters the properties of molecules in a solution when high concentrations of macromolecules such as proteins are present. Such conditions occur routinely in living cells; for instance, the cytosol of Escherichia coli contains about 300–400 milligrammes per...
. This comes from macromolecules excluding
Excluded volume
The concept of excluded volume was introduced by Werner Kuhn in 1934 and applied to polymer molecules shortly thereafter by Paul Flory.- In liquid state theory :...
other molecules from a large part of the volume of the solution, thereby increasing these molecules' effective concentration
Activity (chemistry)
In chemical thermodynamics, activity is a measure of the “effective concentration” of a species in a mixture, meaning that the species' chemical potential depends on the activity of a real solution in the same way that it would depend on concentration for an ideal solution.By convention, activity...
.

Some examples of organic macromolecules are bio-polymers (DNA
DNA
Deoxyribonucleic acid is a nucleic acid that contains the genetic instructions used in the development and functioning of all known living organisms . The DNA segments that carry this genetic information are called genes, but other DNA sequences have structural purposes, or are involved in...
, carbohydrate
Carbohydrate
A carbohydrate is an organic compound with the empirical formula ; that is, consists only of carbon, hydrogen, and oxygen, with a hydrogen:oxygen atom ratio of 2:1 . However, there are exceptions to this. One common example would be deoxyribose, a component of DNA, which has the empirical...
s, protein
Protein
Proteins are biochemical compounds consisting of one or more polypeptides typically folded into a globular or fibrous form, facilitating a biological function. A polypeptide is a single linear polymer chain of amino acids bonded together by peptide bonds between the carboxyl and amino groups of...
s and lipid
Lipid
Lipids constitute a broad group of naturally occurring molecules that include fats, waxes, sterols, fat-soluble vitamins , monoglycerides, diglycerides, triglycerides, phospholipids, and others...
s) and synthetic polymers (plastic
Plastic
A plastic material is any of a wide range of synthetic or semi-synthetic organic solids used in the manufacture of industrial products. Plastics are typically polymers of high molecular mass, and may contain other substances to improve performance and/or reduce production costs...
s, synthetic fiber
Synthetic fiber
Synthetic fibers are the result of extensive research by scientists to improve on naturally occurring animal and plant fibers. In general, synthetic fibers are created by forcing, usually through extrusion, fiber forming materials through holes into the air, forming a thread...
and rubber
Synthetic rubber
Synthetic rubber is is any type of artificial elastomer, invariably a polymer. An elastomer is a material with the mechanical property that it can undergo much more elastic deformation under stress than most materials and still return to its previous size without permanent deformation...
).

Some examples of inorganic macromolecules are graphene
Graphene
Graphene is an allotrope of carbon, whose structure is one-atom-thick planar sheets of sp2-bonded carbon atoms that are densely packed in a honeycomb crystal lattice. The term graphene was coined as a combination of graphite and the suffix -ene by Hanns-Peter Boehm, who described single-layer...
and carbon nanotube
Carbon nanotube
Carbon nanotubes are allotropes of carbon with a cylindrical nanostructure. Nanotubes have been constructed with length-to-diameter ratio of up to 132,000,000:1, significantly larger than for any other material...
.