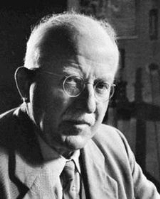 Encyclopedia
Hermann Staudinger was a German
Germans
The Germans are a Germanic ethnic group native to Central Europe. The English term Germans has referred to the German-speaking population of the Holy Roman Empire since the Late Middle Ages....
chemist
Chemist
A chemist is a scientist trained in the study of chemistry. Chemists study the composition of matter and its properties such as density and acidity. Chemists carefully describe the properties they study in terms of quantities, with detail on the level of molecules and their component atoms...
who demonstrated the existence of macromolecules, which he characterized as polymers. For this work he received the 1953 Nobel Prize
Nobel Prize
The Nobel Prizes are annual international awards bestowed by Scandinavian committees in recognition of cultural and scientific advances. The will of the Swedish chemist Alfred Nobel, the inventor of dynamite, established the prizes in 1895...
in Chemistry. He is also known for his discovery of ketenes and of the Staudinger reaction
Staudinger reaction
The Staudinger reaction or Staudinger reduction is a chemical reaction in which the combination of an azide with a phosphine or phosphite produces an iminophosphorane intermediate. Combined with the hydrolysis of the aza-ylide to produce a phosphine oxide and an amine, this reaction is a mild...
.

Hermann Staudinger was born in 1881 in Worms, Germany
Worms, Germany
Worms is a city in Rhineland-Palatinate, Germany, on the Rhine River. At the end of 2004, it had 85,829 inhabitants.Established by the Celts, who called it Borbetomagus, Worms today remains embattled with the cities Trier and Cologne over the title of "Oldest City in Germany." Worms is the only...
. After receiving his Ph.D. from the University of Halle in 1903, Staudinger took a position at the University of Strasbourg
University of Strasbourg
The University of Strasbourg in Strasbourg, Alsace, France, is the largest university in France, with about 43,000 students and over 4,000 researchers....
. It was here that he discovered the ketene
Ketene
A ketene is an organic compound of the form R'RC=C=O. The term is also used specifically to mean ethenone, the simplest ketene, where R' and R are hydrogen atoms.Ketenes were first studied as a class by Hermann Staudinger.-Formation:...
s, a family of molecules characterized by the general form depicted in Figure 1. Ketenes would prove a synthetically important intermediate for the production of yet-to-be-discovered antibiotics such as penicillin
Penicillin
Penicillin is a group of antibiotics derived from Penicillium fungi. They include penicillin G, procaine penicillin, benzathine penicillin, and penicillin V....
and amoxicillin
Amoxicillin
Amoxicillin , formerly amoxycillin , and abbreviated amox, is a moderate-spectrum, bacteriolytic, β-lactam antibiotic used to treat bacterial infections caused by susceptible microorganisms. It is usually the drug of choice within the class because it is better absorbed, following oral...
.

In 1907, Staudinger began an assistant professorship at the Technical University of Karlsruhe. Here, he successfully isolated a number of useful organic compounds (including a synthetic coffee flavoring) as more completely reviewed by Rolf Mülhaupt.

In 1912, Staudinger took on a new position at the Swiss Federal Institute of Technology
ETH Zurich
The Swiss Federal Institute of Technology Zurich or ETH Zürich is an engineering, science, technology, mathematics and management university in the City of Zurich, Switzerland....
in Zurich, Switzerland. One of his earliest discoveries came in 1919, when he and colleague Meyer reported that azides react with triphenylphosphine
Triphenylphosphine
Triphenylphosphine is a common organophosphorus compound with the formula P3 - often abbreviated to PPh3 or Ph3P. It is widely used in the synthesis of organic and organometallic compounds. PPh3 exists as relatively air stable, colorless crystals at room temperature...
to form phosphazide  (Figure 2). This reaction – commonly referred to as the Staudinger reaction
Staudinger reaction
The Staudinger reaction or Staudinger reduction is a chemical reaction in which the combination of an azide with a phosphine or phosphite produces an iminophosphorane intermediate. Combined with the hydrolysis of the aza-ylide to produce a phosphine oxide and an amine, this reaction is a mild...
– produces a high phosphazide yield.

While at Karlsruhe and later, Zurich, Staudinger began research in the chemistry of rubber
Rubber
Natural rubber, also called India rubber or caoutchouc, is an elastomer that was originally derived from latex, a milky colloid produced by some plants. The plants would be ‘tapped’, that is, an incision made into the bark of the tree and the sticky, milk colored latex sap collected and refined...
, for which very high molecular weights
Molecular mass
The molecular mass of a substance is the mass of one molecule of that substance, in unified atomic mass unit u...
had been measured by the physical methods of Raoult
François-Marie Raoult
François-Marie Raoult was a French chemist who conducted research into the behavior of solutions, especially their physical properties.- Life and work :Raoult was born at Fournes, in the département of Nord...
and van 't Hoff
Jacobus Henricus van 't Hoff
Jacobus Henricus van 't Hoff, Jr. was a Dutch physical and organic chemist and the first winner of the Nobel Prize in chemistry. He is best known for his discoveries in chemical kinetics, chemical equilibrium, osmotic pressure, and stereochemistry...
. Contrary to prevailing ideas (see below), Staudinger proposed in a landmark paper published in 1920 that rubber and other polymeric substances such as starch
Starch
Starch or amylum is a carbohydrate consisting of a large number of glucose units joined together by glycosidic bonds. This polysaccharide is produced by all green plants as an energy store...
, cellulose
Cellulose
Cellulose is an organic compound with the formula , a polysaccharide consisting of a linear chain of several hundred to over ten thousand β linked D-glucose units....
and proteins are long chains of short repeating molecular units linked by covalent bonds. In other words, polymers are like chains of paper clips, made up of small constituent parts linked from end to end (Figure 3).

At the time leading organic chemists such as Emil Fischer
Hermann Emil Fischer
Hermann Emil Fischer, Emil Fischer was a German chemist and 1902 recipient of the Nobel Prize in Chemistry. He discovered the Fischer esterification. He developed the Fischer projection, a symbolic way of drawing asymmetric carbon atoms.-Early years:Fischer was born in Euskirchen, near Cologne,...
and Heinrich Wieland believed that the measured high molecular weights were only apparent values caused by the aggregation of small molecules into colloids. At first the majority of Staudinger’s colleagues refused to accept the possibility that small molecules could link together covalently to form high-molecular weight compounds. As Mülhaupt aptly notes, this is due in part to the fact that molecular structure and bonding theory were not fully understood in the early 20th century.

Further evidence to support Staudinger’s hypothesis emerged in the 1930s. High molecular weights of polymers were confirmed by membrane osmometry
Osmotic pressure
Osmotic pressure is the pressure which needs to be applied to a solution to prevent the inward flow of water across a semipermeable membrane....
, and also by Staudinger’s measurements of viscosity
Viscosity
Viscosity is a measure of the resistance of a fluid which is being deformed by either shear or tensile stress. In everyday terms , viscosity is "thickness" or "internal friction". Thus, water is "thin", having a lower viscosity, while honey is "thick", having a higher viscosity...
in solution. The X-ray diffraction studies of polymers by Herman Mark provided direct evidence for long chains of repeating molecular units. And the synthetic work led by Carothers
Wallace Carothers
Wallace Hume Carothers was an American chemist, inventor and the leader of organic chemistry at DuPont, credited with the invention of nylon....
demonstrated that polymers such as nylon
Nylon
Nylon is a generic designation for a family of synthetic polymers known generically as polyamides, first produced on February 28, 1935, by Wallace Carothers at DuPont's research facility at the DuPont Experimental Station...
and polyester
Polyester
Polyester is a category of polymers which contain the ester functional group in their main chain. Although there are many polyesters, the term "polyester" as a specific material most commonly refers to polyethylene terephthalate...
could be prepared by well-understood organic reactions.

Staudinger’s groundbreaking elucidation of the nature of the high-molecular weight compounds he termed Makromoleküle paved the way for the birth of the field of polymer chemistry. Staudinger himself saw the potential for this science long before it was fully realized. “It is not improbable,” Staudinger smartly commented in 1936, “that sooner or later a way will be discovered to prepare artificial fibers from synthetic high-molecular products, because the strength and elasticity of natural fibers depend exclusively on their macro-molecular structure – i.e., on their long thread-shaped molecules.” Staudinger founded the first polymer chemistry journal in 1940, and in 1953 received the Nobel Prize in Chemistry
Nobel Prize in Chemistry
The Nobel Prize in Chemistry is awarded annually by the Royal Swedish Academy of Sciences to scientists in the various fields of chemistry. It is one of the five Nobel Prizes established by the will of Alfred Nobel in 1895, awarded for outstanding contributions in chemistry, physics, literature,...
for “his discoveries in the field of macromolecular chemistry.” His pioneering research has afforded the world myriad plastics, textiles, and other polymeric materials which make consumer products more affordable, attractive and fun, while also being a cause of problematic pollution.