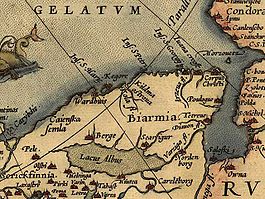 The Solovki prison camp was located on the Solovetsky Islands
Solovetsky Islands
The Solovetsky Islands , or Solovki , are an archipelago located in the Onega Bay of the White Sea, Russia. The islands are served by the Solovki Airport. Area: ....
, in the White Sea
White Sea
The White Sea is a southern inlet of the Barents Sea located on the northwest coast of Russia. It is surrounded by Karelia to the west, the Kola Peninsula to the north, and the Kanin Peninsula to the northeast. The whole of the White Sea is under Russian sovereignty and considered to be part of...
). It was the "mother of the GULAG
Gulag
The Gulag was the government agency that administered the main Soviet forced labor camp systems. While the camps housed a wide range of convicts, from petty criminals to political prisoners, large numbers were convicted by simplified procedures, such as NKVD troikas and other instruments of...
" according to Aleksandr Solzhenitsyn
Aleksandr Solzhenitsyn
Aleksandr Isayevich Solzhenitsyn was aRussian and Soviet novelist, dramatist, and historian. Through his often-suppressed writings, he helped to raise global awareness of the Gulag, the Soviet Union's forced labor camp system – particularly in The Gulag Archipelago and One Day in the Life of...
. Historically Solovetsky Islands have been the location of the famous Russian Orthodox Solovetsky Monastery
Solovetsky Monastery
Solovetsky Monastery was the greatest citadel of Christianity in the Russian North before being turned into a special Soviet prison and labor camp , which served as a prototype for the GULag system. Situated on the Solovetsky Islands in the White Sea, the monastery braved many changes of fortune...
complex, which repelled foreign attacks during the Time of Troubles
Time of Troubles
The Time of Troubles was a period of Russian history comprising the years of interregnum between the death of the last Russian Tsar of the Rurik Dynasty, Feodor Ivanovich, in 1598, and the establishment of the Romanov Dynasty in 1613. In 1601-1603, Russia suffered a famine that killed one-third...
, the Crimean War
Crimean War
The Crimean War was a conflict fought between the Russian Empire and an alliance of the French Empire, the British Empire, the Ottoman Empire, and the Kingdom of Sardinia. The war was part of a long-running contest between the major European powers for influence over territories of the declining...
, and the Russian Civil War
Russian Civil War
The Russian Civil War was a multi-party war that occurred within the former Russian Empire after the Russian provisional government collapsed to the Soviets, under the domination of the Bolshevik party. Soviet forces first assumed power in Petrograd The Russian Civil War (1917–1923) was a...
.

By Lenin's decree, the monastery buildings were turned into Solovetsky Lager' Osobogo Naznachenia (SLON), that is, the "Solovki Special Purpose Camp". The acronym of the camp name is a sullen word play for those who speak Russian
Russian language
Russian is a Slavic language used primarily in Russia, Belarus, Uzbekistan, Kazakhstan, Tajikistan and Kyrgyzstan. It is an unofficial but widely spoken language in Ukraine, Moldova, Latvia, Turkmenistan and Estonia and, to a lesser extent, the other countries that were once constituent republics...
: slon means "elephant
Elephant
Elephants are large land mammals in two extant genera of the family Elephantidae: Elephas and Loxodonta, with the third genus Mammuthus extinct...
". It was one of the first "corrective labor camp
Labor camp
A labor camp is a simplified detention facility where inmates are forced to engage in penal labor. Labor camps have many common aspects with slavery and with prisons...
s", a prototype of the Gulag
Gulag
The Gulag was the government agency that administered the main Soviet forced labor camp systems. While the camps housed a wide range of convicts, from petty criminals to political prisoners, large numbers were convicted by simplified procedures, such as NKVD troikas and other instruments of...
system. In the beginning of 1924 sometimes the double name was used Severnye (Solovetskiye) Lagerya OGPU (Northern (Solvki) camps of OGPU)

In 1926 the Solovki camp was turned into a prison, partly because of the conditions which made escape near impossible and partly because the monastery had been used as a political prison by the Russian imperial administration
Russian Empire
The Russian Empire was a state that existed from 1721 until the Russian Revolution of 1917. It was the successor to the Tsardom of Russia and the predecessor of the Soviet Union...
. The treatment of the prisoners attracted much criticism in Western Europe and the USA. After a thorough cleanup, the Soviet government sent the proletarian writer Maksim Gorky to the camp in an attempt to counter this criticism. Indeed, Gorky wrote a very favourable essay, which praised the beautiful nature of the islands. How much Gorky knew about the real conditions, remains a mystery.

The prison was closed in 1939 because the Second World War was imminent, while the camp was situated close to the border with Finland
Finland
Finland , officially the Republic of Finland, is a Nordic country situated in the Fennoscandian region of Northern Europe. It is bordered by Sweden in the west, Norway in the north and Russia in the east, while Estonia lies to its south across the Gulf of Finland.Around 5.4 million people reside...
. The buildings were then transformed into a naval base. The navy cadet corps was deployed in the monastery buildings, one of the notable cadets was the future author Valentin Pikul
Valentin Pikul
Valentin Savvich Pikul was a popular and prolific Soviet historical novelist of Ukrainian-Russian heritage. He lived and worked in Riga....
. The Orthodox Church reestablished the monastery in 1992, the year when the ensemble was included into UNESCO
UNESCO
The United Nations Educational, Scientific and Cultural Organization is a specialized agency of the United Nations...
's World Heritage List.

Many prisoners were members of the intelligentsia
Intelligentsia
The intelligentsia is a social class of people engaged in complex, mental and creative labor directed to the development and dissemination of culture, encompassing intellectuals and social groups close to them...
, and represent the cream of Tsarist and revolutionary-period Russia. These include:


Solovki camp in art and literature