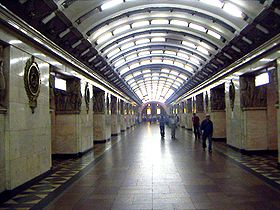 The pylon station consists of three separate halls, separated from each other by a row of pylons with passages between them. The independence of the halls allows the architectural form of the central and side halls to be differentiated. This was especially characteristic for stations built in the 1960s, when as a result of the policy of "total economy," the side halls and tunnel walls were significantly poorer than the central hall.

Building stations of the pylon type is preferable in difficult geological situations, as such a station is better able to oppose earth pressure. However, the limited number of narrow passages limits the throughput between the halls.

The pylon station was the earliest type of deep underground station. One variation is the so-called "London-style station." In such stations the central hall is reduced to the size of an anteroom, leading to the inclined walkway or elevators. In some cases the anteroom is also the base of the escalators. In the countries of the former USSR there is currently only one such station: Arsenalna
Arsenalna (Kiev Metro)
Arsenalna is a station on Kiev Metro's Sviatoshynsko-Brovarska Line. The station was opened along with the first stage and is currently the deepest station in the world . This attributed to Kiev's geography where the high bank of the Dnieper River rises above the rest of the city...
in Kiev
Kiev
Kiev or Kyiv is the capital and the largest city of Ukraine, located in the north central part of the country on the Dnieper River. The population as of the 2001 census was 2,611,300. However, higher numbers have been cited in the press....
. In Moscow
Moscow
Moscow is the capital, the most populous city, and the most populous federal subject of Russia. The city is a major political, economic, cultural, scientific, religious, financial, educational, and transportation centre of Russia and the continent...
there were such stations, but they since been rebuilt: Lubyanka
Lubyanka (Metro)
Lubyanka is a station on the Sokolnicheskaya Line of the Moscow Metro, located under Lubyanka Square. It opened in 1935 as part of the first stage of the Metro.-History:...
and Chistiye Prudy
Chistiye Prudy
Chistye Prudy is a Moscow Metro station in the Basmanny District, Central Administrative Okrug, Moscow. It is on the Sokolnicheskaya Line, between Lubyanka and Krasnye Vorota stations. Chistye Prudy was opened on 15 May 1935 as a part of the first segment of the Metro...
are now ordinary pylon stations, and Paveletskaya-Radialnaya
Paveletskaya-Radialnaya
Paveletskaya is a Moscow Metro station on the Zamoskvoretskaya Line. It was opened in 1943 and was designed by S.V. Lyashchenko and E.S. Demchenko. Paveletskaya features tall white marble pillars decorated with the hammer and sickle and a high, arched ceiling...
is now a column station
Deep column station
The deep column station is a type of subway station, consisting of a central hall with two side halls, connected by ring-like passages between a row of columns...
.