A loya jirga is a type of jirga
Jirga
A jirga is a tribal assembly of elders which takes decisions by consensus, particularly among the Pashtun people but also in other ethnic groups near them; they are most common in Afghanistan and among the Pashtuns in Pakistan near its border with Afghanistan...
regarded as "grand assembly," a phrase in the Pashto language meaning "grand council." A loya jirga is a mass meeting usually prepared for major events such as choosing a new king, adopting a constitution, or discussing important national political or emergency matters as well as disputes in the Pashtun
Pashtun people
Pashtuns or Pathans , also known as ethnic Afghans , are an Eastern Iranic ethnic group with populations primarily between the Hindu Kush mountains in Afghanistan and the Indus River in Pakistan...
areas of Afghanistan
Afghanistan
Afghanistan , officially the Islamic Republic of Afghanistan, is a landlocked country located in the centre of Asia, forming South Asia, Central Asia and the Middle East. With a population of about 29 million, it has an area of , making it the 42nd most populous and 41st largest nation in the world...
and Pakistan
Pakistan
Pakistan , officially the Islamic Republic of Pakistan is a sovereign state in South Asia. It has a coastline along the Arabian Sea and the Gulf of Oman in the south and is bordered by Afghanistan and Iran in the west, India in the east and China in the far northeast. In the north, Tajikistan...
. In Afghanistan, the loya jirga was originally attended by the Pashtuns, but later included other ethnic groups. It is a forum unique among the Pashtun tribes
Pashtun tribes
The Pashtun people are the largest ethnic group in Afghanistan and the second largest in Pakistan. Pashtun, tribes are divided into four supertribal confederacies: the Arbanee , Betanee , Gharghasht, and Karlanee .Traditionally, according to folklore, all Pashtuns are said to have descended, at...
of Afghanistan and Pakistan in which, traditionally, tribal elders meet together.

The Aryan tribes, which came down in intermittent waves from Central Asia
Central Asia
Central Asia is a core region of the Asian continent from the Caspian Sea in the west, China in the east, Afghanistan in the south, and Russia in the north...
to present Afghanistan and then moved to
India (around 1500 BC), tribes practiced a sort of jirga-system with two types of councils – simite and sabha. The simite
(the summit) comprised elders and tribal chiefs. The king also joined sessions of the simite. Sabha was a sort of rural
council.
It was used over time for the selection of rulers and headmen and the airing of matters of principle. From the time of the great Kushan ruler Kanishka to the 1970s there were sixteen nation
Nation
A nation may refer to a community of people who share a common language, culture, ethnicity, descent, and/or history. In this definition, a nation has no physical borders. However, it can also refer to people who share a common territory and government irrespective of their ethnic make-up...
al loya jirgas and hundreds of smaller ones. The institution, which is centuries old, is a similar idea to the Islamic "shura", or consultative assembly.

The phrase loya jirga is Pashto and means "grand council". The institution, which is centuries old, is a similar idea to the Islamic "shura", or consultative assembly, BBC world.


In the Afghan (Pashtun
Pashtun people
Pashtuns or Pathans , also known as ethnic Afghans , are an Eastern Iranic ethnic group with populations primarily between the Hindu Kush mountains in Afghanistan and the Indus River in Pakistan...
) society the Loya Jirga is still maintained and very strongly practiced, mostly in front of tribal chiefs or with them to solve internal and external tribal problems or disputes with other tribes.

When the Afghans took the power they tried to legitimize their power with such a Jirga. While in the beginning only Pashtuns were allowed to participate in the Jirgas, later other ethnic groups like Tajiks and Hazaras were allowed to participate as well, however they were little more than observers. The member of the Jirgas were mostly members of the Royal Family, religious leaders and tribal chiefs of the Afghans. King Amanullah Khan
Amanullah Khan
Amanullah Khan was the King of the Emirate of Afghanistan from 1919 to 1929, first as Amir and after 1926 as Shah. He led Afghanistan to independence over its foreign affairs from the United Kingdom, and his rule was marked by dramatic political and social change...
institutionalized the Jirga. From Amanullah until the reign of Mohammed Zahir Shah
Mohammed Zahir Shah
Mohammed Zahir Shah was the last King of Afghanistan, reigning for four decades, from 1933 until he was ousted by a coup in 1973...
(1933–1973) and Mohammed Daoud Khan
Mohammed Daoud Khan
Sardar Mohammed Daoud Khan or Daud Khan was Prime Minister of Afghanistan from 1953 to 1963 and later becoming the President of Afghanistan...
(1973–1978) the Jirga was recognized as a common meeting of regional Pashtun leaders.

The meetings do not have scheduled occurrences, but rather are called for when issues or disputes arise.

There is no time limit for a Loya Jirga to conclude, and the meetings often take a long time because decisions can only be made as a group and arguments can drag out for days. Many different problems are addressed, like foreign policy, declarations of war, the legitimacy of leaders, and the introduction of new ideas and laws. 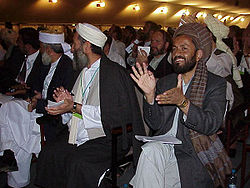