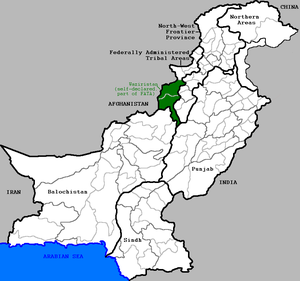 Waziristan is a mountainous region near the Northwest of Pakistan
Pakistan
Pakistan , officially the Islamic Republic of Pakistan is a sovereign state in South Asia. It has a coastline along the Arabian Sea and the Gulf of Oman in the south and is bordered by Afghanistan and Iran in the west, India in the east and China in the far northeast. In the north, Tajikistan...
, bordering Afghanistan
Afghanistan
Afghanistan , officially the Islamic Republic of Afghanistan, is a landlocked country located in the centre of Asia, forming South Asia, Central Asia and the Middle East. With a population of about 29 million, it has an area of , making it the 42nd most populous and 41st largest nation in the world...
and covering some 11,585 km² (4,473 sq mi). The area is entirely populated by ethnic Pashtuns
Pashtun people
Pashtuns or Pathans , also known as ethnic Afghans , are an Eastern Iranic ethnic group with populations primarily between the Hindu Kush mountains in Afghanistan and the Indus River in Pakistan...
(Afghans). The language spoken in the valley is Pashto/Pakhto. It is part of the Federally Administered Tribal Areas
Federally Administered Tribal Areas
The Federally Administered Tribal Areas are a semi-autonomous tribal region in the northwest of Pakistan, lying between the province of Khyber Pakhtunkhwa, Balochistan, and the neighboring country of Afghanistan. The FATA comprise seven Agencies and six FRs...
, considered to be outside the country's four provinces.

Waziristan comprises the area west and southwest of Peshawar
Peshawar
Peshawar is the capital of Khyber-Pakhtunkhwa and the administrative center and central economic hub for the Federally Administered Tribal Areas of Pakistan....
between the Tochi River to the north and the Gomal River
Gomal River
Gomal River is a river in the historical region of Pashtunistan, consisting of areas in Afghanistan and Pakistan, inhabited by the Pashtuns...
to the south. Khyber Pakhtunkhwa lies immediately to the east. The region was an independent tribal territory of Afghanistan until 1893, remaining outside the British Empire
British Empire
The British Empire comprised the dominions, colonies, protectorates, mandates and other territories ruled or administered by the United Kingdom. It originated with the overseas colonies and trading posts established by England in the late 16th and early 17th centuries. At its height, it was the...
. Tribal raiding into British-ruled territory was a constant problem for the British, eliciting frequent punitive expeditions between 1860 and 1945. The region became part of Pakistan in 1947.

The Wazir tribes are divided into sub-tribes governed by male village elders who meet in a tribal jirga
Loya jirga
A loya jirga is a type of jirga regarded as "grand assembly," a phrase in the Pashto language meaning "grand council." A loya jirga is a mass meeting usually prepared for major events such as choosing a new king, adopting a constitution, or discussing important national political or emergency...
. Socially and religiously, Waziristan is an extremely conservative area. Women are carefully guarded, and every household must be headed by a male figure. Tribal cohesiveness is also kept strong by means of the so-called Collective Responsibility Acts in the Frontier Crimes Regulation.

Taliban presence in the area has been an issue of international concern in the War on Terrorism
War on Terrorism
The War on Terror is a term commonly applied to an international military campaign led by the United States and the United Kingdom with the support of other North Atlantic Treaty Organisation as well as non-NATO countries...
particularly since the 2001 invasion of Afghanistan
War in Afghanistan (2001–present)
The War in Afghanistan began on October 7, 2001, as the armed forces of the United States of America, the United Kingdom, Australia, and the Afghan United Front launched Operation Enduring Freedom...
. 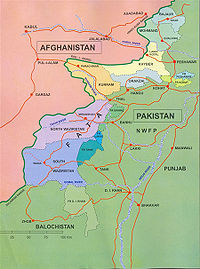 North Waziristan's District capital is Miranshah
Miranshah
Miranshah is the capital or headquarters of North Waziristan in Pakistan. It is the site of a town, which has s small airfield that was built by the British for World War II. The area in which Miranshah sits is extremely dangerous mainly due to Taliban activities and U.S. Drone...
, also known as Miramshah, or Mirumshah in the local dialect.

The area is mostly inhabited by the Darwesh Khel (better known as Utmanzai Waziris, who are related to Ahmedzai Waziris of South Waziristan), a sub clan of the Wazir tribe (from which the region derives its name), who live in fortified mountain villages, including Razmak, Datta Khel, Spin wam, Dosali,Shawa, Shawal and the Dawars (also known as Daurr or Daur), who farm in the valleys below in villages including Miranshah, Darpa Khel, Amzoni, Ali Khel, Mirali, Edak, Hurmaz,mussaki, Hassu Khel, Ziraki, Tapi, Issori, Haider Khel, Khaddi and Arabkot.

North Waziristan shares an open border with Khost
Khost Province
Khost is one of the thirty-four provinces of Afghanistan. It is in the east of the country. Khost province used to be part of Paktia province in the past...
, a province of Afghanistan
Afghanistan
Afghanistan , officially the Islamic Republic of Afghanistan, is a landlocked country located in the centre of Asia, forming South Asia, Central Asia and the Middle East. With a population of about 29 million, it has an area of , making it the 42nd most populous and 41st largest nation in the world...
.

The South Waziristan's Agency has its district headquarters at Wana.

South Waziristan, comprising about 6500 square kilometre, is the most volatile agency of Pakistan. Not under the direct administration of the government of Pakistan, South Waziristan is indirectly governed by a political agent, who has been either an outsider or a Waziri—a system inherited from the British Raj
British Raj
British Raj was the British rule in the Indian subcontinent between 1858 and 1947; The term can also refer to the period of dominion...
.

In the rugged and remote region of Waziristan on British
United Kingdom
The United Kingdom of Great Britain and Northern IrelandIn the United Kingdom and Dependencies, other languages have been officially recognised as legitimate autochthonous languages under the European Charter for Regional or Minority Languages...
India's northwest border with Afghanistan
Afghanistan
Afghanistan , officially the Islamic Republic of Afghanistan, is a landlocked country located in the centre of Asia, forming South Asia, Central Asia and the Middle East. With a population of about 29 million, it has an area of , making it the 42nd most populous and 41st largest nation in the world...
, mountain tribes of Muslim fighters gave the British Indian Army a difficult time in numerous operations from 1860 onwards.

The Waziristan Revolt of 1919–1920 was sparked by the Afghan invasion of British India in 1919. Though the British made peace with the Afghans
Afghanistan
Afghanistan , officially the Islamic Republic of Afghanistan, is a landlocked country located in the centre of Asia, forming South Asia, Central Asia and the Middle East. With a population of about 29 million, it has an area of , making it the 42nd most populous and 41st largest nation in the world...
, the Waziri
Waziri
Waziri may refer to:* Wazir , a Pashtun tribe* Waziri language, spoken by Waziris* Waziri , a breed of sheep originating in Waziristan* Something or someone originating from Waziristan* The family name of the Sokoto Grand Vizier...
and Mahsud
Mahsud
Mahsud is a Pashtun tribe in South Waziristan, a tribal region in Pakistan. Mahsud are considered to be one of the bravest and toughest Pashtun Tribes. The Mahsud tribe lives in the centre of South Waziristan valley, surrounded on three sides by the Darwesh Waziris, and being shut off by the...
tribesmen gave the imperial (almost entirely Indian) forces a very difficult fight. Some of the tribesmen were veterans of the British-organised local militias that were irregular elements of the Indian Army (Pakistan did not exist at this time), and used some modern Lee-Enfield
Lee-Enfield
The Lee-Enfield bolt-action, magazine-fed, repeating rifle was the main firearm used by the military forces of the British Empire and Commonwealth during the first half of the 20th century...
rifles against the Indian forces sent into Waziristan. One aspect of this conflict was the effective use of air power against the Waziris and Mahsuds. This is similar to Royal Air Force tactics in suppressing the Arab Revolt in Iraq
Iraq
Iraq ; officially the Republic of Iraq is a country in Western Asia spanning most of the northwestern end of the Zagros mountain range, the eastern part of the Syrian Desert and the northern part of the Arabian Desert....
in 1920 and 1921.

Taliban presence and the War on Terror

Traditionally, local Waziri religious leaders have enlisted outsiders in their feuds, though it's not always that way, as local Waziris claim they are against the foreign militant presence there. In the early stage of the U.S. invasion of Afghanistan, when the Taliban started fleeing into Pakistan, the local leaders, or Malik
Malik
Malik is an Arabic word meaning "king, chieftain".It has been adopted in various other, mainly Islamized or Arabized, Asian languages for their ruling princes and to render kings elsewhere. It is also sometimes used in derived meanings...
s, began a campaign among their locals to oust the foreigners. Since then, around 200 Maliks have been assassinated by local Taliban through targeted killings
Targeted killing
Targeted killing is the deliberate, specific targeting and killing, by a government or its agents, of a supposed terrorist or of a supposed "unlawful combatant" who is not in that government's custody...
.

On June 4, 2007, the National Security Council of Pakistan
National Security Council of Pakistan
The Prime minister Secretariat National Security Council is a consultative body that is chaired by the President of Pakistan and Prime minister of Pakistan. It is a principal forum that is mandated for considering national security and foreign policy matters with the senior national security...
met to decide the fate of Waziristan and take up a number of political and administrative issues in order to control the "Talibanization" of the area. The meeting was chaired by President Pervez Musharraf and attended by the Chief Ministers and Governors of all 4 provinces. They discussed the deteriorating law and order situation and the threat posed to state security.

The government decided to take a number of actions to stop the "Talibanization" and to crush the armed militancy in the Tribal regions and the NWFP.

The NSC of Pakistan has decided the following actions will be taken to achieve the goals:


The ministry of interior has played a large part in the information gathering for the operations against the militants and their institutions. The Ministry of the Interior has prepared a list of militant commanders operating in the region and they have also prepared a list of seminaries for monitoring.
( waziristan is a tribal area, and in any tribal area of pakistan, no body can deploye police. there are another options like frontier corps(militia) and khasadar ( local tribesmen force))
The government is also trying to strengthen law enforcement in the area by providing the NWFP Police with weapons, bullet-proof jackets, and night-vision devices. The paramilitary Frontier Corps is to be provided with artillery and APC
Armoured personnel carrier
An armoured personnel carrier is an armoured fighting vehicle designed to transport infantry to the battlefield.APCs are usually armed with only a machine gun although variants carry recoilless rifles, anti-tank guided missiles , or mortars...
s. The state agencies are also studying ways to jam illegal FM radio channels.

In December 2008, the Pakistan Army 14th Infantry Division, which was based in and operating in Waziristan, was moved and redeployed to the Indian border amidst rising tensions between the two countries in the aftermath of the November 2008 Mumbai attacks.