The following is a list of all 120 of the Doges of Venice
Doge of Venice
The Doge of Venice , often mistranslated Duke was the chief magistrate and leader of the Most Serene Republic of Venice for over a thousand years. Doges of Venice were elected for life by the city-state's aristocracy. Commonly the person selected as Doge was the shrewdest elder in the city...
ordered by the dates of their reigns which are put in parentheses.

For more than 1,000 years, the chief magistrate
Chief Magistrate
Chief Magistrate is a generic designation for a public official whose office—individual or collegial—is the highest in his or her class, in either of the fundamental meanings of Magistrate : as a major political and administrative office , and/or as a judge Chief Magistrate is a generic designation...
and leader of the city of Venice
Venice
Venice is a city in northern Italy which is renowned for the beauty of its setting, its architecture and its artworks. It is the capital of the Veneto region...
and later of the Most Serene Republic of Venice
Republic of Venice
The Republic of Venice or Venetian Republic was a state originating from the city of Venice in Northeastern Italy. It existed for over a millennium, from the late 7th century until 1797. It was formally known as the Most Serene Republic of Venice and is often referred to as La Serenissima, in...
was styled the Doge, a rare but not unique Italian title derived from the Latin Dux
Dux
Dux is Latin for leader and later for Duke and its variant forms ....
. Doges of Venice were elected for life by the city-state's aristocracy. Commonly the person selected as Doge was one of the shrewdest elders in the city. The Venetian combination of elaborate monarchic pomp and a republican (though "aristocratic") constitution with intricate checks and balances makes "La serenissima" (Venice) a textbook example of a crowned republic
Crowned republic
A crowned republic is a form of constitutional monarchy where the monarch's role is ceremonial and all the royal prerogatives are prescribed by custom and law in such a way that the monarch has little or no discretion over governmental and constitutional issues.The term has been used to describe...
.

Despite the great power given to them, the Venetian Doges were restricted by law (unlike the Doges of the Republic of Genoa
Doge of Genoa
The Republic of Genoa, in what is now northern Italy, was technically a communal republic in the early Middle Ages, although it was actually an oligarchy ruled by a small group of merchant families, from whom were selected the Doges of Genoa.- History :...
) to spend the rest of their lives inside the Doge's Palace complex and St Mark's Basilica
St Mark's Basilica
The Patriarchal Cathedral Basilica of Saint Mark is the cathedral church of the Roman Catholic Archdiocese of Venice, northern Italy. It is the most famous of the city's churches and one of the best known examples of Byzantine architecture...
, occasionally leaving for diplomatic reasons. 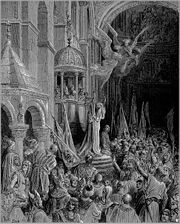 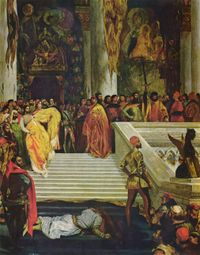 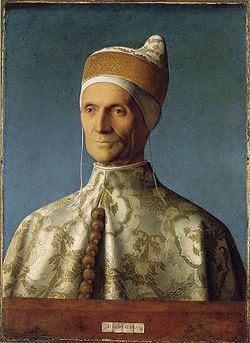 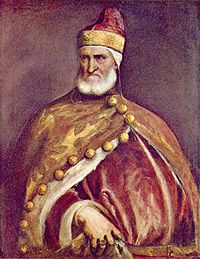 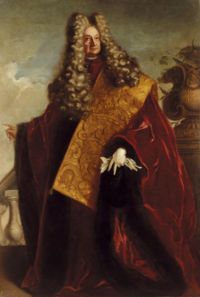