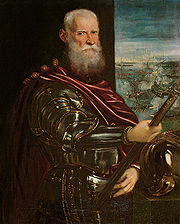 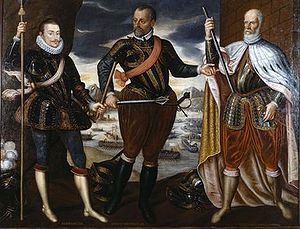 Sebastiano Venier (c. 1496 – March 3, 1578) was Doge of Venice
Doge of Venice
The Doge of Venice , often mistranslated Duke was the chief magistrate and leader of the Most Serene Republic of Venice for over a thousand years. Doges of Venice were elected for life by the city-state's aristocracy. Commonly the person selected as Doge was the shrewdest elder in the city...
from June 11, 1577 to March 3, 1578.

He worked as a lawyer
Lawyer
A lawyer, according to Black's Law Dictionary, is "a person learned in the law; as an attorney, counsel or solicitor; a person who is practicing law." Law is the system of rules of conduct established by the sovereign government of a society to correct wrongs, maintain the stability of political...
from a very early age, though without holding formal qualifications, and subsequently was an administrator for the government of the Republic of Venice
Republic of Venice
The Republic of Venice or Venetian Republic was a state originating from the city of Venice in Northeastern Italy. It existed for over a millennium, from the late 7th century until 1797. It was formally known as the Most Serene Republic of Venice and is often referred to as La Serenissima, in...
. In 1570 he was procurator and, in the December of the same year, capitano generale da mar ("Chief admiral") of the Venetian fleet in the new war against the Ottoman Turks
Ottoman Turks
The Ottoman Turks were the Turkish-speaking population of the Ottoman Empire who formed the base of the state's military and ruling classes. Reliable information about the early history of Ottoman Turks is scarce, but they take their Turkish name, Osmanlı , from the house of Osman I The Ottoman...
.

He was the commander of the Venetian contingent at Battle of Lepanto
Battle of Lepanto (1571)
The Battle of Lepanto took place on 7 October 1571 when a fleet of the Holy League, a coalition of Catholic maritime states, decisively defeated the main fleet of the Ottoman Empire in five hours of fighting on the northern edge of the Gulf of Patras, off western Greece...
(7 October 1571), in which the Christian League decisively defeated the Turks. After the peace he returned to Venice as a very popular figure, and in 1577, at the age of 81, he was unanimously elected Doge.

He was married to Cecilia Contarini, who bore him a daughter, Elena Venier, and two sons. One of his sons, Francisco Venier, went to France
France
The French Republic , The French Republic , The French Republic , (commonly known as France , is a unitary semi-presidential republic in Western Europe with several overseas territories and islands located on other continents and in the Indian, Pacific, and Atlantic oceans. Metropolitan France...
.
Sebastiano Venier died in 1578, allegedly of broken heart
Broken heart
A broken heart is a common metaphor used to describe the intense emotional pain or suffering one feels after losing a loved one, whether through death, divorce, breakup, physical separation or romantic rejection....
after a fire that had heavily damaged the Doge's Palace of Venice
Venice
Venice is a city in northern Italy which is renowned for the beauty of its setting, its architecture and its artworks. It is the capital of the Veneto region...
. He was interred in the Basilica di San Giovanni e Paolo, a traditional burial place of the doges.

He was a first cousin once removed of Cecilia Venier-Baffo, known as Nurbanu Sultan after her conversion to Islam, daughter of his first cousin Nicolò Venier, Lord of Paros
Nicolò Venier, Lord of Paros
-Ancestry:Nicolò Venier was a son of Zuan Francesco Venier, Co-Lord of Cerigo and his wife Fiorenza Sommaripa, Lady of Paros. He was the brother of Sebastiano Venier, Doge of Venice.-Marriage and issue:...
. He sold her to the Ottoman Sultan Suleyman the Magnificent in 1536 in order to counter the ascension of Roxelana
Roxelana
Haseki Hürrem Sultan was the wife of Süleyman the Magnificent of the Ottoman Empire.-Names:Sixteenth-century sources are silent as to her maiden name, but much later traditions, for example Ukrainian folk traditions first recorded in the 19th century, give it as "Anastasia" , and Polish...
. She became eventually the wife of his rival Selim II
Selim II
Selim II Sarkhosh Hashoink , also known as "Selim the Sot " or "Selim the Drunkard"; and as "Sarı Selim" or "Selim the Blond", was the Sultan of the Ottoman Empire from 1566 until his death in 1574.-Early years:He was born in Constantinople a son of Suleiman the...
and the mother of Murad III
Murad III
Murad III was the Sultan of the Ottoman Empire from 1574 until his death.-Biography:...
, from whom descend all succeeding Sultans.