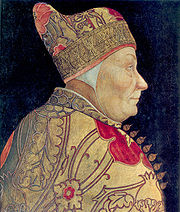 Francesco Foscari was doge of Venice
Venice
Venice is a city in northern Italy which is renowned for the beauty of its setting, its architecture and its artworks. It is the capital of the Veneto region...
from 1423 to 1457, at the inception of the Italian Renaissance
Italian Renaissance
The Italian Renaissance began the opening phase of the Renaissance, a period of great cultural change and achievement in Europe that spanned the period from the end of the 13th century to about 1600, marking the transition between Medieval and Early Modern Europe...
.

Foscari, of an ancient noble family, served the Republic of Venice
Republic of Venice
The Republic of Venice or Venetian Republic was a state originating from the city of Venice in Northeastern Italy. It existed for over a millennium, from the late 7th century until 1797. It was formally known as the Most Serene Republic of Venice and is often referred to as La Serenissima, in...
in numerous official capacities—as ambassador, president of the Forty, member of the Council of Ten
Council of Ten
The Council of Ten, or simply the Ten, was, from 1310 to 1797, one of the major governing bodies of the Republic of Venice whose actions were often secretive. Although some sources may indicate that the Council of Ten was generally accepted in Venice, there was some opposition...
, inquisitor, Procuratore di San Marco, avvogadore di comun— before he was elected in 1423, thus defeating the other candidate, Pietro Loredan
Pietro Loredan
Pietro Loredan was a Venetian nobleman and admiral.Loredan was responsible for making Venice a dominant power in northeastern Italy in the 15th century. His first great victory was over the Ottoman Turks near Gallipoli in June 1416. He later triumphed over rival Genoa near Rapallo in 1431...
. His task as doge was to lead Venice in a long and protracted series of wars against Milan
Milan
Milan is the second-largest city in Italy and the capital city of the region of Lombardy and of the province of Milan. The city proper has a population of about 1.3 million, while its urban area, roughly coinciding with its administrative province and the bordering Province of Monza and Brianza ,...
, governed by the Visconti
House of Visconti
Visconti is the family name of two important Italian noble dynasties of the Middle Ages. There are two distinct Visconti families: The first one in the Republic of Pisa in the mid twelfth century who achieved prominence first in Pisa, then in Sardinia where they became rulers of Gallura...
, who were attempting to dominate all of northern Italy
Northern Italy
Northern Italy is a wide cultural, historical and geographical definition, without any administrative usage, used to indicate the northern part of the Italian state, also referred as Settentrione or Alta Italia...
. Despite the justification of Venetian embroilment in the terraferma
Domini di Terraferma
The Domini di Terraferma or Stato da Tera was the name given to the territories of the Republic of Venice conquered in the Padano–Veneto hinterland....
that was offered in Foscari's funeral oration, delivered by the humanist senator and historian Bernardo Giustiniani, and some encouraging notable victories, the war was extremely costly to Venice, whose real source of wealth and power was at sea, and to her ally Florence
Florence
Florence is the capital city of the Italian region of Tuscany and of the province of Florence. It is the most populous city in Tuscany, with approximately 370,000 inhabitants, expanding to over 1.5 million in the metropolitan area....
; they were eventually overcome by the forces of Milan under the leadership of Francesco Sforza. Sforza soon made peace with Florence, however, leaving Venice
Venice
Venice is a city in northern Italy which is renowned for the beauty of its setting, its architecture and its artworks. It is the capital of the Veneto region...
adrift.

In 1445, Foscari's only surviving son, Jacopo, was tried by the Council of Ten
Council of Ten
The Council of Ten, or simply the Ten, was, from 1310 to 1797, one of the major governing bodies of the Republic of Venice whose actions were often secretive. Although some sources may indicate that the Council of Ten was generally accepted in Venice, there was some opposition...
on charges of bribery and corruption and exiled from the city. Two further trials, in 1450 and 1456, led to Jacopo's imprisonment on Crete
Crete
Crete is the largest and most populous of the Greek islands, the fifth largest island in the Mediterranean Sea, and one of the thirteen administrative regions of Greece. It forms a significant part of the economy and cultural heritage of Greece while retaining its own local cultural traits...
and his eventual death there.

News of Jacopo's death caused Foscari to withdraw from his government duties, and in October 1457 the Council of Ten forced him to resign. However, his death a week later provoked such public outcry that he was given a state funeral. 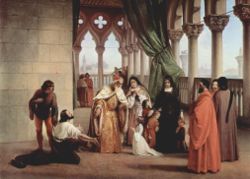 Beside his profile portrait by Lazzaro Bastiani
Lazzaro Bastiani
Lazzaro Bastiani was an Italian painter of the Renaissance, active mainly in Venice.He was born in Padua. He is first recorded as a painter in Venice by 1460 in a payment for an altarpiece of San Samuele, for the Procuratori di San Marco. In 1462 he was paid at the same rate as Giovanni Bellini...
, Foscari commissioned a bas-relief bronze plaquette from Donatello
Donatello
Donato di Niccolò di Betto Bardi , also known as Donatello, was an early Renaissance Italian artist and sculptor from Florence...
, which survives in several examples. His figure kneeling in prayer to St Mark figured over the portal to the Doge's Palace until it was dismantled by order of the revolutionary government, 1797; the head was preserved and is conserved in the Museo dell'Opera di Palazzo Ducale. His monument by the sculptor Antonio Bregno in collaboration with his architect brother Paolo was erected in Santa Maria dei Frari, Venice. Foscari's life was the subject of a play The Two Foscari by Lord Byron (1821) and an episode in Samuel Rogers
Samuel Rogers
Samuel Rogers was an English poet, during his lifetime one of the most celebrated, although his fame has long since been eclipsed by his Romantic colleagues and friends Wordsworth, Coleridge and Byron...
' long poem Italy. The Byron play served as the basis for the libretto written by Francesco Maria Piave
Francesco Maria Piave
Francesco Maria Piave was an Italian opera librettist who was born in Murano in the lagoon of Venice, during the brief Napoleonic Kingdom of Italy. His career spanned over twenty years working with many of the significant composers of his day...
for Giuseppe Verdi
Giuseppe Verdi
Giuseppe Fortunino Francesco Verdi was an Italian Romantic composer, mainly of opera. He was one of the most influential composers of the 19th century...
's opera I due Foscari
I due Foscari
I due Foscari is an opera in three acts by Giuseppe Verdi to an Italian libretto by Francesco Maria Piave, based on a historical play, The Two Foscari by Lord Byron....
, which premiered on 3 November 1844 in Rome
Rome
Rome is the capital of Italy and the country's largest and most populated city and comune, with over 2.7 million residents in . The city is located in the central-western portion of the Italian Peninsula, on the Tiber River within the Lazio region of Italy.Rome's history spans two and a half...
. Mary Mitford, author of the popular literary sketches of the English countryside entitled Our Village
Our Village
Our Village is a collection of about 100 literary sketches of rural life written by Mary Russell Mitford , and originally published during the 1820s and 1830s. The series first appeared in The Lady's Magazine. The full title is: Our Village: Sketches of Rural Character and Scenery...
, also wrote a successful play concerned with events in Foscari's life. Mitford's play debuted at Covent Garden in 1826 with famed actor Charles Kemble
Charles Kemble
Charles Kemble was a British actor.-Life:The youngest son of Roger Kemble, and younger brother of John Philip Kemble, Stephen Kemble and Sarah Siddons, he was born at Brecon, South Wales. Like John Philip, he was educated at Douai...
in the lead.