Encyclopedia
Ludovico Manin was the last Doge of Venice
Doge of Venice
The Doge of Venice , often mistranslated Duke was the chief magistrate and leader of the Most Serene Republic of Venice for over a thousand years. Doges of Venice were elected for life by the city-state's aristocracy. Commonly the person selected as Doge was the shrewdest elder in the city...
. He governed Venice from 9 March 1789 until 1797, when he was forced to abdicate
Abdication
Abdication occurs when a monarch, such as a king or emperor, renounces his office.-Terminology:The word abdication comes derives from the Latin abdicatio. meaning to disown or renounce...
by Napoleon Bonaparte
Napoleon I of France
Napoleon Bonaparte was a French military and political leader during the latter stages of the French Revolution.As Napoleon I, he was Emperor of the French from 1804 to 1815...
.

Lodovico Manin was born on 14 May 1725, the eldest of five sons of Lodovico III Alvise (1695-1775) and Lucrezia Maria Basadonna, the great-granddaughter of cardinal
Cardinal (Catholicism)
A cardinal is a senior ecclesiastical official, usually an ordained bishop, and ecclesiastical prince of the Catholic Church. They are collectively known as the College of Cardinals, which as a body elects a new pope. The duties of the cardinals include attending the meetings of the College and...
Basadonna from Treviso.
He attended the University of Bologna and was a boarder at the College of St. Xavier noble: there he printed some propositions of natural law, which he incurred in this period.
When he began public life, was quickly noticed for his generosity, his honesty, his kindness and above all his wealth.

At twenty-six he was elected captain of Vicenza, then to Verona where he had to cope with the flood of 1757, finally Brescia. In 1764 he was appointed procurator of San Marco de ultra. Fond of religious meditations in 1769 he asked and obtained permission to not hold an office because of ill health and bad hearing. In 1787 he was chosen to honor Pope Pius VI as he crossed the possessions of Venice and the Pope rewarded him knighted and awarded a number of spiritual privileges.

Lodovico married Elizabeth Grimani, who bore him a dowry of 45,000 ducats. Elizabeth had been educated in a monastery in Treviso and was in poor health since childhood. She gave him no children. As the eldest he owned Villa Manin di Passariano, that was inherited by his nephew, Lodovico Leonardo I (1771-1853) the son of his brother Giovanni (1736-1774) and Caterina (de) Pesaro, the heiress of a wealthy noble Israelite family, who claimed to come from Cyrus the Great.

He was elected Doge of Venice
Doge of Venice
The Doge of Venice , often mistranslated Duke was the chief magistrate and leader of the Most Serene Republic of Venice for over a thousand years. Doges of Venice were elected for life by the city-state's aristocracy. Commonly the person selected as Doge was the shrewdest elder in the city...
on 9 March 1789, approximately one month before the start of the French Revolution
French Revolution
The French Revolution , sometimes distinguished as the 'Great French Revolution' , was a period of radical social and political upheaval in France and Europe. The absolute monarchy that had ruled France for centuries collapsed in three years...
, on the first ballot (the electoral assembly was composed of 41 members). His traditional coronation ceremony required him to throw coins to the Venetians, which cost more than 458,197 Lira
Lira
Lira is the name of the monetary unit of a number of countries, as well as the former currency of Italy, Malta, San Marino and the Vatican City and Israel. The term originates from the value of a Troy pound of high purity silver. The libra was the basis of the monetary system of the Roman Empire...
, less than a quarter of which was paid from the funds of the Republic of Venice, the rest coming out of his own pocket. By the year 1792, he had allowed the once great Venetian merchant fleet to decline to a mere 309 merchantmen
Cargo ship
A cargo ship or freighter is any sort of ship or vessel that carries cargo, goods, and materials from one port to another. Thousands of cargo carriers ply the world's seas and oceans each year; they handle the bulk of international trade...
. 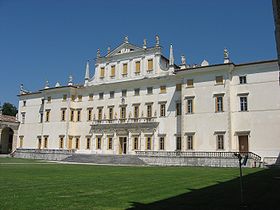 When Napoleon
Napoleon I of France
Napoleon Bonaparte was a French military and political leader during the latter stages of the French Revolution.As Napoleon I, he was Emperor of the French from 1804 to 1815...
invaded Italy, Venice, along with Genoa
Genoa
Genoa |Ligurian]] Zena ; Latin and, archaically, English Genua) is a city and an important seaport in northern Italy, the capital of the Province of Genoa and of the region of Liguria....
, did not initially join the coalition of Italian states formed in 1795, instead maintaining neutrality. On 15 April 1797, Jean-Andoche Junot
Jean-Andoche Junot
Jean-Andoche Junot, 1st Duke of Abrantès was a French general during the Revolutionary and Napoleonic Wars.-Early life:...
gave the Doge an ultimatum
Ultimatum
An ultimatum is a demand whose fulfillment is requested in a specified period of time and which is backed up by a threat to be followed through in case of noncompliance. An ultimatum is generally the final demand in a series of requests...
which was not accepted. A secret addition to the Treaty of Leoben
Treaty of Leoben
The Treaty of Leoben was signed on 17 April 1797 by Napoleon Bonaparte. It was a preliminary accord that contained many secret clauses. From these clauses, Austria would lose the Austrian Netherlands and Lombardy in exchange for the Venetian territories of Istria and Dalmatia...
, signed on 17 April 1797, gave Venice—as well as Istria
Istria
Istria , formerly Histria , is the largest peninsula in the Adriatic Sea. The peninsula is located at the head of the Adriatic between the Gulf of Trieste and the Bay of Kvarner...
and Dalmatia
Dalmatia
Dalmatia is a historical region on the eastern coast of the Adriatic Sea. It stretches from the island of Rab in the northwest to the Bay of Kotor in the southeast. The hinterland, the Dalmatian Zagora, ranges from fifty kilometers in width in the north to just a few kilometers in the south....
— to Austria
Austria
Austria , officially the Republic of Austria , is a landlocked country of roughly 8.4 million people in Central Europe. It is bordered by the Czech Republic and Germany to the north, Slovakia and Hungary to the east, Slovenia and Italy to the south, and Switzerland and Liechtenstein to the...
. On 25 April 1797, the French fleet arrived at the Lido. Venetian cannons sank one of the ships, but did not succeed in repelling the invasion since the Venetian war fleet numbered only 4 galleys and 7 galliots. The Doge surrendered on 12 May 1797 and left the Doge's Palace two days later.

After his abdication Lodovico Manin refused an offer to become the interim head of the municipality and withdrew from society, reportedly refusing even to answer his door to friends. He returned the ducal insignia (principally the distinctive ducal crown known as the corno ducale) alongside the "golden book" that served as a register of the oligarch
Oligarch
Oligarch may refer to:* A member of an oligarchy, a form of government* Business oligarch* Russian oligarch...
ical families of the republic to the Piazza San Marco
Piazza San Marco
Piazza San Marco , is the principal public square of Venice, Italy, where it is generally known just as "the Piazza". All other urban spaces in the city are called "campi"...
where they were hidden by the new city authorities.
Due to health reasons he was forced to walk a lot and on these occasions was sometimes made the object of insults from former citizens who lamented Venice's changed fortunes and were angered by his decision to avoid bloodshed by surrendering the freedom of the ancient republic to the French. He wanted to end his days in a monastery but this proved impossible.

He died in his house of dropsy and heart problems on 24 October 1802. His will ordered that his funeral should take place "with the least possible pomp". He left 110,000 ducats to the Manin Foundation for the benefit of the cities lunatic
Lunatic
"Lunatic" is a commonly used term for a person who is mentally ill, dangerous, foolish, unpredictable; a condition once called lunacy. The word derives from lunaticus meaning "of the moon" or "moonstruck".-Lunar hypothesis:...
s, orphan
Orphan
An orphan is a child permanently bereaved of or abandoned by his or her parents. In common usage, only a child who has lost both parents is called an orphan...
s, and girls from poor families needing a dowry
Dowry
A dowry is the money, goods, or estate that a woman brings forth to the marriage. It contrasts with bride price, which is paid to the bride's parents, and dower, which is property settled on the bride herself by the groom at the time of marriage. The same culture may simultaneously practice both...
. His ashes were interned in the chapel of the Church of the Scalzi
Scalzi (Venice)
The church of Santa Maria di Nazareth or church of the Scalzi is a religious building in the sestiere of Cannaregio in Venice, near Venezia Santa Lucia railway station. It was built in the 18th century by Baldassarre Longhena....
in Venice near the present railway station of Venice Saint Lucia in the family tomb of Manin where his late wife already lay. The urn
Urn
An urn is a vase, ordinarily covered, that usually has a narrowed neck above a footed pedestal. "Knife urns" placed on pedestals flanking a dining-room sideboard were an English innovation for high-style dining rooms of the late 1760s...
survives and bears the simple inscription Cineres MANINI, or "ashes of Manin".

He also left his memoirs which were later collected and published by his grandson Louis Joseph Manin (1815-1877). The son of Louis Joseph, namely Louis Leonardo Manin (1851-1950) had no legitimate children but sired two sons by Elizabeth widow of Signor Baseggio, namely Gioachino Baseggio and the famous actor Cesco Baseggio.
The source of this article is wikipedia, the free encyclopedia.  The text of this article is licensed under the GFDL.