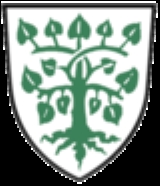 Encyclopedia
Lindau is a Bavaria
Bavaria
Bavaria, formally the Free State of Bavaria is a state of Germany, located in the southeast of Germany. With an area of , it is the largest state by area, forming almost 20% of the total land area of Germany...
n town and an island on the eastern side of Lake Constance
Lake Constance
Lake Constance is a lake on the Rhine at the northern foot of the Alps, and consists of three bodies of water: the Obersee , the Untersee , and a connecting stretch of the Rhine, called the Seerhein.The lake is situated in Germany, Switzerland and Austria near the Alps...
, the Bodensee. It is the capital of the Landkreis or rural district of Lindau
Lindau (district)
Lindau is a Landkreis or rural district in Bavaria, Germany; its capital is the city of Lindau. It is bounded by the district of Oberallgäu, Austria , Lake Constance and the state of Baden-Württemberg .-History:The city of Lindau became a Free Imperial City in the 13th century; it was...
. The historic city of Lindau is located on an 0.68 square kilometre (0.262549467842924 sq mi) island which is connected with the mainland by bridge and railway.

The name Lindau was first mentioned by a monk from St. Gallen
St. Gallen
St. Gallen is the capital of the canton of St. Gallen in Switzerland. It evolved from the hermitage of Saint Gall, founded in the 7th century. Today, it is a large urban agglomeration and represents the center of eastern Switzerland. The town mainly relies on the service sector for its economic...
in a document of 882, stating that Adalbert, count of Raetia
Raetia
Raetia was a province of the Roman Empire, named after the Rhaetian people. It was bounded on the west by the country of the Helvetii, on the east by Noricum, on the north by Vindelicia, on the west by Cisalpine Gaul and on south by Venetia et Histria...
, had founded a nunnery on the island. However remains of an early Roman
Roman Empire
The Roman Empire was the post-Republican period of the ancient Roman civilization, characterised by an autocratic form of government and large territorial holdings in Europe and around the Mediterranean....
settlement dating back to the 1st century have been found in the district of Aeschach.

In 1180 the St. Stephan's church was founded. In 1224 the Franciscan
Franciscan
Most Franciscans are members of Roman Catholic religious orders founded by Saint Francis of Assisi. Besides Roman Catholic communities, there are also Old Catholic, Anglican, Lutheran, ecumenical and Non-denominational Franciscan communities....
s founded a monastery on the island. In 1274/75 Lindau became an Imperial Free City under King Rudolph I
Rudolph I of Germany
Rudolph I was King of the Romans from 1273 until his death. He played a vital role in raising the Habsburg dynasty to a leading position among the Imperial feudal dynasties...
. In 1430, about 15 of the town's Jews were burned at the stake after being accused of murdering a Christian child. In 1528, Lindau accepted the Protestant Reformation
Protestant Reformation
The Protestant Reformation was a 16th-century split within Western Christianity initiated by Martin Luther, John Calvin and other early Protestants. The efforts of the self-described "reformers", who objected to the doctrines, rituals and ecclesiastical structure of the Roman Catholic Church, led...
. The city first followed the Tetrapolitan Confession
Tetrapolitan Confession
The Tetrapolitan Confession, also called the Confessio Tetrapolitana, Strasbourg Confession, or Swabian Confession, was the official confession of the followers of Huldrych Zwingli and the first confession of the reformed church...
, and then the Augsburg Confession
Augsburg Confession
The Augsburg Confession, also known as the "Augustana" from its Latin name, Confessio Augustana, is the primary confession of faith of the Lutheran Church and one of the most important documents of the Lutheran reformation...
. After the Thirty Years' War
Thirty Years' War
The Thirty Years' War was fought primarily in what is now Germany, and at various points involved most countries in Europe. It was one of the most destructive conflicts in European history....
, in 1655 the first Lindauer Kinderfest (children's festival) was held in memory of the war time.

After the dissolution of the Holy Roman Empire
Holy Roman Empire
The Holy Roman Empire was a realm that existed from 962 to 1806 in Central Europe.It was ruled by the Holy Roman Emperor. Its character changed during the Middle Ages and the Early Modern period, when the power of the emperor gradually weakened in favour of the princes...
, Lindau lost its status as an Imperial Free City in 1802. The city went to Karl August von Bretzenheim who gave the city and monastery to the Kingdom of Austria
Austria
Austria , officially the Republic of Austria , is a landlocked country of roughly 8.4 million people in Central Europe. It is bordered by the Czech Republic and Germany to the north, Slovakia and Hungary to the east, Slovenia and Italy to the south, and Switzerland and Liechtenstein to the...
in 1804. In 1805 Austria returned the city to Bavaria.

In 1853 a causeway was built to connect the railway from Munich to the island. In 1856 the city built a new harbour with its characteristic landmark, the lion sculpture, together with Bavaria's only lighthouse
Lindau Lighthouse
The Lindau Lighthouse is the southernmost lighthouse in Germany, located in Lindau on Lake Constance. It is tall and has a perimeter of at its base. Notably it has also a clock in its facade.-History:...
.

In 1922 the independent districts of Aeschach, Hoyren and Reutin merged with the town of city. After World War II
World War II
World War II, or the Second World War , was a global conflict lasting from 1939 to 1945, involving most of the world's nations—including all of the great powers—eventually forming two opposing military alliances: the Allies and the Axis...
Lindau fell under French
France
The French Republic , The French Republic , The French Republic , (commonly known as France , is a unitary semi-presidential republic in Western Europe with several overseas territories and islands located on other continents and in the Indian, Pacific, and Atlantic oceans. Metropolitan France...
administration. In 1955 Lindau again returned to Bavaria.

Lindau is located near the meeting point of the Austrian, German and Swiss borders. It nestles on the lake under Pfänder
Pfänder
The Pfänder with its unique views of Lake Constance , Germany, Austria, Switzerland and 240 mountain peaks, is the most famous lookout point of the region....
mountain. Lindau is popular with sightseers and holidaymakers for its medieval city centre and pleasant location on Lake Constance. Since 1951, the Nobel Laureate Meetings at Lindau
Nobel Laureate Meetings at Lindau
The Nobel Laureate Meetings at Lindau is a scientific conference held yearly in Lindau, Germany, inviting Nobel prize winners to present to and interact with young researchers from all over the world.-History:...
attract many Nobel prize
Nobel Prize
The Nobel Prizes are annual international awards bestowed by Scandinavian committees in recognition of cultural and scientific advances. The will of the Swedish chemist Alfred Nobel, the inventor of dynamite, established the prizes in 1895...
winners to Lindau every year. A congress of medical physics is also held yearly. The casino owned by the state of Bavaria
Bavaria
Bavaria, formally the Free State of Bavaria is a state of Germany, located in the southeast of Germany. With an area of , it is the largest state by area, forming almost 20% of the total land area of Germany...
is a further attraction. 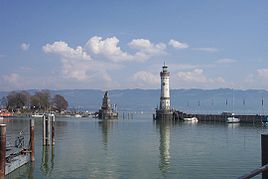 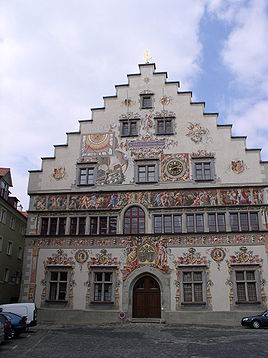 In former times an important trading route from Nuremberg
Nuremberg
Nuremberg[p] is a city in the German state of Bavaria, in the administrative region of Middle Franconia. Situated on the Pegnitz river and the Rhine–Main–Danube Canal, it is located about north of Munich and is Franconia's largest city. The population is 505,664...
to Italy
Italy
Italy , officially the Italian Republic languages]] under the European Charter for Regional or Minority Languages. In each of these, Italy's official name is as follows:;;;;;;;;), is a unitary parliamentary republic in South-Central Europe. To the north it borders France, Switzerland, Austria and...
passed through Lindau; the lake fishery has also played a big role in the economy of the city. In the 19th century Lindau was an important location for textile industries. Today there are a lot of small companies amongst some industrial companies:

Since 1964 Lindau has a cooperation with the French City of Chelles
Chelles, Seine-et-Marne
Chelles is a commune in the eastern suburbs of Paris, France. It is located in the Seine-et-Marne department in the Île-de-France region from the center of Paris....
which was initiated by the returned French soldiers after World War II.

Lindau is believed to be the origin of the Lindauer surname of Germany, Switzerland, Alsace-Lorraine, Austria and the Czech Republic. A Jewish family bearing this name is said to have descended from Suskind of Lindau, who was among those killed during the pogrom of 1430.

Lindau is twinned
Town twinning
Twin towns and sister cities are two of many terms used to describe the cooperative agreements between towns, cities, and even counties in geographically and politically distinct areas to promote cultural and commercial ties.- Terminology :...
with: Serpukhov
Serpukhov
Serpukhov is a city in Moscow Oblast, Russia, which is situated at the confluence of the Oka and the Nara Rivers. It is located south from Moscow on the Moscow—Simferopol highway. The Moscow—Tula railway passes through the town. Population: -History:...
(Russia
Russia
Russia or , officially known as both Russia and the Russian Federation , is a country in northern Eurasia. It is a federal semi-presidential republic, comprising 83 federal subjects...
) Chelles
Chelles
Chelles is the name of two communes of France:*Chelles, Oise in the Oise département*Chelles, Seine-et-Marne in the Seine-et-Marne département, 18 km east of ParisIt may also refer to:*Chelles Abbey...
(France
France
The French Republic , The French Republic , The French Republic , (commonly known as France , is a unitary semi-presidential republic in Western Europe with several overseas territories and islands located on other continents and in the Indian, Pacific, and Atlantic oceans. Metropolitan France...
) Reitnau
Reitnau
Reitnau is a municipality in the district of Zofingen in the canton of Aargau in Switzerland.-History:Reitnau is first mentioned in 1045 as Reitinouwa. The village was originally owned by the Count of Lenzburg, though in 1045 it and the village church were granted to the convent in Schänis. The...
(Switzerland
Switzerland
Switzerland name of one of the Swiss cantons. ; ; ; or ), in its full name the Swiss Confederation , is a federal republic consisting of 26 cantons, with Bern as the seat of the federal authorities. The country is situated in Western Europe,Or Central Europe depending on the definition....
)