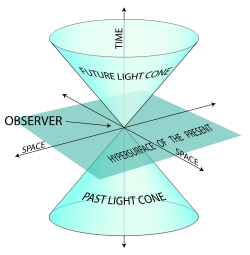 A light cone is the path that a flash of light, emanating from a single event
Event (relativity)
In physics, and in particular relativity, an event indicates a physical situation or occurrence, located at a specific point in space and time. For example, a glass breaking on the floor is an event; it occurs at a unique place and a unique time, in a given frame of reference.Strictly speaking, the...
(localized to a single point in space and a single moment in time) and traveling in all directions, would take through spacetime
Spacetime
In physics, spacetime is any mathematical model that combines space and time into a single continuum. Spacetime is usually interpreted with space as being three-dimensional and time playing the role of a fourth dimension that is of a different sort from the spatial dimensions...
. If we imagine the light confined to a two-dimensional plane, the light from the flash spreads out in a circle after the event E occurs, and if we graph the growing circle with the vertical axis of the graph representing time, the result is a cone
Cone (geometry)
A cone is an n-dimensional geometric shape that tapers smoothly from a base to a point called the apex or vertex. Formally, it is the solid figure formed by the locus of all straight line segments that join the apex to the base...
, known as the future light cone. The past light cone behaves like the future light cone in reverse, a circle which contracts in radius at the speed of light until it converges to a point at the exact position and time of the event E. In reality, there are three space dimensions
Dimension (vector space)
In mathematics, the dimension of a vector space V is the cardinality of a basis of V. It is sometimes called Hamel dimension or algebraic dimension to distinguish it from other types of dimension...
, so the light would actually form an expanding or contracting sphere in 3D space rather than a circle in 2D, and the light cone would actually be a four-dimensional version
Hypercone
In geometry, a hypercone is the figure in the 4-dimensional Euclidean space represented by the equationx^2 + y^2 + z^2 - w^2 = 0....
of a cone whose cross-sections form 3D spheres (analogous to a normal three-dimensional cone whose cross-sections form 2D circles), but the concept is easier to visualize with the number of spatial dimensions reduced from three to two.

In special relativity
Special relativity
Special relativity is the physical theory of measurement in an inertial frame of reference proposed in 1905 by Albert Einstein in the paper "On the Electrodynamics of Moving Bodies".It generalizes Galileo's...
, a light cone (or null cone) is the surface describing the temporal evolution of a flash of light
Light
Light or visible light is electromagnetic radiation that is visible to the human eye, and is responsible for the sense of sight. Visible light has wavelength in a range from about 380 nanometres to about 740 nm, with a frequency range of about 405 THz to 790 THz...
in Minkowski spacetime. This can be visualized in 3-space if the two horizontal axes are chosen to be spatial dimensions, while the vertical axis is time.

The light cone is constructed as follows. Taking as event

a flash of light (light pulse) at time

, all events that can be reached by this pulse from

form the future light cone of

, while those events that can send a light pulse to

form the past light cone of

, the light cone classifies all events in space+time into 5 distinct categories:

Keep in mind, we're talking about an event, a specific location at a specific time. To say that one event cannot affect another, that means that there isn't enough time for light to get from one to the other. Light from each event will eventually (after some time) make it to the old location of the other event, but since that's at a later time, it's not the same event.

As time progresses forward, the future light cone of a given event will eventually grow to encompass more and more locations (in other words, the 3D sphere that represents the cross-section of the 4D light cone at a particular moment in time becomes larger at later times). Likewise, if we imagine running time backwards from a given event, the event's past light cone would likewise encompass more and more locations at earlier and earlier times. The further locations will of course be at more distant times, for example if we are considering the past light cone of an event which takes place on Earth today, a star 10,000 light years away would only be inside the past light cone at times 10,000 years or more in the past. The past light cone of an event on present-day Earth, at its very edges, includes very distant objects (every object in the observable universe
Observable universe
In Big Bang cosmology, the observable universe consists of the galaxies and other matter that we can in principle observe from Earth in the present day, because light from those objects has had time to reach us since the beginning of the cosmological expansion...
), but only what they looked like long ago, when the universe was young.

If using a system of units where the speed of light in vacuum is defined as exactly 1, for example if space is measured in light-second
Light-second
A light-second is a unit of length useful in astronomy, telecommunications and relativistic physics. It is defined as the distance that light travels in free space in one second, and is equal to exactly 299,792,458 metres...
s and time is measured in seconds, then the cone will have a slope of 45°, because light travels a distance of one light-second in vacuum
Vacuum
In everyday usage, vacuum is a volume of space that is essentially empty of matter, such that its gaseous pressure is much less than atmospheric pressure. The word comes from the Latin term for "empty". A perfect vacuum would be one with no particles in it at all, which is impossible to achieve in...
during one second. Since special relativity requires the speed of light to be equal in every inertial frame, all observers must arrive at the same angle of 45° for their light cones. Commonly a Minkowski diagram
Minkowski diagram
The Minkowski diagram was developed in 1908 by Hermann Minkowski and provides an illustration of the properties of space and time in the special theory of relativity. It allows a quantitative understanding of the corresponding phenomena like time dilation and length contraction without mathematical...
is used to illustrate this property of Lorentz transformation
Lorentz transformation
In physics, the Lorentz transformation or Lorentz-Fitzgerald transformation describes how, according to the theory of special relativity, two observers' varying measurements of space and time can be converted into each other's frames of reference. It is named after the Dutch physicist Hendrik...
s.
Elsewhere, an integral part of light cones, is the region of spacetime outside the light cone at a given event (a point in spacetime). Events that are elsewhere from each other are mutually unobservable, and cannot be causally connected.

(The 45° figure really only has meaning in space-space, as we try to understand space-time by making space-space drawings. Space-space tilt is measured by angle
Angle
In geometry, an angle is the figure formed by two rays sharing a common endpoint, called the vertex of the angle.Angles are usually presumed to be in a Euclidean plane with the circle taken for standard with regard to direction. In fact, an angle is frequently viewed as a measure of an circular arc...
s, and calculated with trig functions. Space-time tilt is measured by rapidity
Rapidity
In relativity, rapidity is an alternative to speed as a framework for measuring motion. On parallel velocities rapidities are simply additive, unlike speeds at relativistic velocities. For low speeds, rapidity and speed are proportional, but for high speeds, rapidity takes a larger value. The...
, and calculated with hyperbolic functions.)

In general relativity
General relativity
General relativity or the general theory of relativity is the geometric theory of gravitation published by Albert Einstein in 1916. It is the current description of gravitation in modern physics...
, the future light cone is the boundary of the causal future of a point
Point (geometry)
In geometry, topology and related branches of mathematics a spatial point is a primitive notion upon which other concepts may be defined. In geometry, points are zero-dimensional; i.e., they do not have volume, area, length, or any other higher-dimensional analogue. In branches of mathematics...
and the past light cone is the boundary of its causal past.

In a curved spacetime, the light-cones cannot all be tilted so that they are 'parallel'; this reflects the fact that the spacetime is curved and is essentially different from Minkowski space. In vacuum regions (those points of spacetime
Spacetime
In physics, spacetime is any mathematical model that combines space and time into a single continuum. Spacetime is usually interpreted with space as being three-dimensional and time playing the role of a fourth dimension that is of a different sort from the spatial dimensions...
free of matter), this inability to tilt all the light-cones so that they are all parallel is reflected in the non-vanishing of the Weyl tensor
Weyl tensor
In differential geometry, the Weyl curvature tensor, named after Hermann Weyl, is a measure of the curvature of spacetime or, more generally, a pseudo-Riemannian manifold. Like the Riemann curvature tensor, the Weyl tensor expresses the tidal force that a body feels when moving along a geodesic...
.