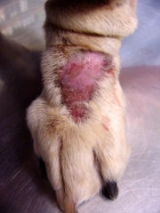 Encyclopedia
A lick granuloma, also known as acral lick dermatitis, is a skin disorder in dog
Dog
The domestic dog is a domesticated form of the gray wolf, a member of the Canidae family of the order Carnivora. The term is used for both feral and pet varieties. The dog may have been the first animal to be domesticated, and has been the most widely kept working, hunting, and companion animal in...
s resulting from an urge to lick the lower portion of the leg. The lesion from the incessant licking is a thickened, firm, oval plaque. 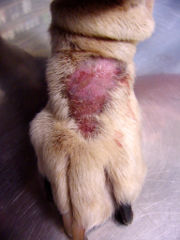 Lick granuloma is a form of self-trauma in which animals, particularly dogs, continuously lick a small area of their body until it becomes raw and inflamed. The most common areas affected are the lower (distal) portions of the legs. The most common cause of lick granuloma appears to be psychological, related to stress, boredom or compulsiveness. It is often considered to be a form of canine obsessive-compulsive disorder, but other less common causes include bacteria
Bacteria
Bacteria are a large domain of prokaryotic microorganisms. Typically a few micrometres in length, bacteria have a wide range of shapes, ranging from spheres to rods and spirals...
l or fungal
Fungus
A fungus is a member of a large group of eukaryotic organisms that includes microorganisms such as yeasts and molds , as well as the more familiar mushrooms. These organisms are classified as a kingdom, Fungi, which is separate from plants, animals, and bacteria...
infections, trauma causing nerve damage, allergies, or joint disease. Hot spots
Hot spot (veterinary medicine)
In veterinary medicine, a "hot spot" is one of the many names for a raw, irritated lesion that results from a pet constantly scratching, chewing, and licking at an area of skin....
may also lead to the formation of lick granulomas. Many large breed dogs appear to be predisposed.

Lick granulomas are especially seen in large active dogs left alone for long periods of time. The condition becomes a vicious cycle - erosion of the skin from licking leads to pain and itching, which leads to more licking. One theory is that excessive licking causes endorphin
Endorphin
Endorphins are endogenous opioid peptides that function as neurotransmitters. They are produced by the pituitary gland and the hypothalamus in vertebrates during exercise, excitement, pain, consumption of spicy food, love and orgasm, and they resemble the opiates in their abilities to produce...
release, causing an addiction to licking. Lick granulomas sometimes becomes infected with bacteria, causing abscessed areas or fistulous tracts (furuncles).

Treatment of the primary cause, if known, is essential. The dog should be tested for allergies, and treated accordingly if positive (fatty acids, antihistamines, hypoallergic diet, etc). It may also be necessary to check thyroid levels as hypothyroidism seems to play a role in some cases, particularly in black Labrador retrievers; thyroid medication often will resolve the problem if it's due to hypothyroidism.

In psychogenic cases, dealing with psychological factors is most important. Factors should be identified such as being left alone all day, being confined, and changes in the household. Correction of these causes may include increased walks, avoiding confinement, and more interaction in the home.

Drugs may be used until behavior modification
Behavior modification
Behavior modification is the use of empirically demonstrated behavior change techniques to increase or decrease the frequency of behaviors, such as altering an individual's behaviors and reactions to stimuli through positive and negative reinforcement of adaptive behavior and/or the reduction of...
has had time to take effect. Antidepressant
Antidepressant
An antidepressant is a psychiatric medication used to alleviate mood disorders, such as major depression and dysthymia and anxiety disorders such as social anxiety disorder. According to Gelder, Mayou &*Geddes people with a depressive illness will experience a therapeutic effect to their mood;...
s are most commonly used, including doxepin
Doxepin
Doxepin is a psychotropic agent with tricyclic antidepressant and anxiolytic properties, known under many brand-names such as Aponal, the original preparation by Boehringer-Mannheim, now part of the Roche group; Adapine, Doxal , Deptran, Sinquan and Sinequan...
, amitriptyline
Amitriptyline
Amitriptyline is a tricyclic antidepressant . It is the most widely used TCA and has at least equal efficacy against depression as the newer class of SSRIs...
, fluoxetine
Fluoxetine
Fluoxetine is an antidepressant of the selective serotonin reuptake inhibitor class. It is manufactured and marketed by Eli Lilly and Company...
, and clomipramine
Clomipramine
Clomipramine is a tricyclic antidepressant . It was developed in the 1960s by the Swiss drug manufacturer Geigy and has been in clinical use worldwide ever since.- Indications :...
. If the psychological factors are not corrected, the dog will usually relapse after the drugs are discontinued. Endorphin blocker
Opioid antagonist
An opioid antagonist is a receptor antagonist that acts on opioid receptors.Naloxone and naltrexone are commonly used opioid antagonist drugs which are competitive antagonists that bind to the opioid receptors with higher affinity than agonists but do not activate the receptors...
s such as naltrexone
Naltrexone
Naltrexone is an opioid receptor antagonist used primarily in the management of alcohol dependence and opioid dependence. It is marketed in generic form as its hydrochloride salt, naltrexone hydrochloride, and marketed under the trade names Revia and Depade...
can be used to reduce addiction to licking, or endorphin substitutes such as hydrocodone
Hydrocodone
Hydrocodone or dihydrocodeinone is a semi-synthetic opioid derived from either of two naturally occurring opiates: codeine and thebaine. It is an orally active narcotic analgesic and antitussive...
may decrease the urge to lick.

The lesion should also be treated. Licking can be prevented by the use of Elizabethan collar
Elizabethan collar
An Elizabethan collar or space collar is a protective medical device worn by an animal, usually a cat or dog...
s, battery enhanced wraps, bandages, antilicking ointments (which are bad tasting) and anti-lick strips. It is important to catch lesions early and keep the dog from licking to then reduce inflammation and development of a habit. Topical medications such as corticosteroid
Corticosteroid
Corticosteroids are a class of steroid hormones that are produced in the adrenal cortex. Corticosteroids are involved in a wide range of physiologic systems such as stress response, immune response and regulation of inflammation, carbohydrate metabolism, protein catabolism, blood electrolyte...
s or DMSO
Dimethyl sulfoxide
Dimethyl sulfoxide is an organosulfur compound with the formula 2SO. This colorless liquid is an important polar aprotic solvent that dissolves both polar and nonpolar compounds and is miscible in a wide range of organic solvents as well as water...
may be effective if used early. Small lesions may be injected with triamcinolone
Triamcinolone
Triamcinolone is a long-acting synthetic corticosteroid given orally, by injection, inhalation, or as a topical ointment or cream....
or methylprednisolone
Methylprednisolone
Methylprednisolone is a synthetic glucocorticoid or corticosteroid drug. It is marketed in the USA and Canada under the brand names Medrol and Solu-Medrol. It is also available as a generic drug....
. Oral antibiotic
Antibiotic
An antibacterial is a compound or substance that kills or slows down the growth of bacteria.The term is often used synonymously with the term antibiotic; today, however, with increased knowledge of the causative agents of various infectious diseases, antibiotic has come to denote a broader range of...
s are used to control infection. Surgery may be performed to remove whole lesions, but there is risk of continued self mutilation to the area afterwards. Other potential treatments include cryosurgery
Cryosurgery
Cryosurgery is the application of extreme cold to destroy abnormal or diseased tissue. The term comes from the Greek words cryo and surgery meaning "hand work" or "handiwork"....
, laser surgery
Soft tissue laser surgery
In soft tissue laser surgery, interaction of laser light with the soft tissue provides a special approach to surgery. A highly focused laser beam vaporizes the soft tissue with the high water content. Laser can make very small incisions when the beam is focused on the tissue...
, radiation therapy
Radiation therapy
Radiation therapy , radiation oncology, or radiotherapy , sometimes abbreviated to XRT or DXT, is the medical use of ionizing radiation, generally as part of cancer treatment to control malignant cells.Radiation therapy is commonly applied to the cancerous tumor because of its ability to control...
, and acupuncture
Acupuncture
Acupuncture is a type of alternative medicine that treats patients by insertion and manipulation of solid, generally thin needles in the body....
. It is important to note that many dogs will lick at another leg, creating a new lick granuloma, if they are prevented from licking at the original one while it heals.

Overall, lick granulomas are very difficult to treat, with control only being achieved in about 65 percent of cases.
The source of this article is wikipedia, the free encyclopedia.  The text of this article is licensed under the GFDL.