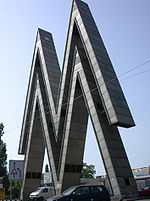 The Leipzig Trade Fair was a major fair for trade across Central Europe
Central Europe
Central Europe or alternatively Middle Europe is a region of the European continent lying between the variously defined areas of Eastern and Western Europe...
for nearly a millennium. After the Second World War, its location happened to lie within the borders of East Germany, whereupon it became one of the most important trade fair
Trade fair
A trade fair is an exhibition organized so that companies in a specific industry can showcase and demonstrate their latest products, service, study activities of rivals and examine recent market trends and opportunities...
s of Comecon
Comecon
The Council for Mutual Economic Assistance , 1949–1991, was an economic organisation under hegemony of Soviet Union comprising the countries of the Eastern Bloc along with a number of communist states elsewhere in the world...
and was traditionally a meeting place for businessmen and politicians from both sides of the Iron Curtain
Iron Curtain
The concept of the Iron Curtain symbolized the ideological fighting and physical boundary dividing Europe into two separate areas from the end of World War II in 1945 until the end of the Cold War in 1989...
.

The history of the Leipzig
Leipzig
Leipzig Leipzig has always been a trade city, situated during the time of the Holy Roman Empire at the intersection of the Via Regia and Via Imperii, two important trade routes. At one time, Leipzig was one of the major European centres of learning and culture in fields such as music and publishing...
fairs goes back to the Middle Ages
Middle Ages
The Middle Ages is a periodization of European history from the 5th century to the 15th century. The Middle Ages follows the fall of the Western Roman Empire in 476 and precedes the Early Modern Era. It is the middle period of a three-period division of Western history: Classic, Medieval and Modern...
. A fair held at Leipzig is first mentioned in 1165. In 1190 Otto the Rich
Otto the Rich
Otto the Rich may refer to:* Otto, Count of Ballenstedt * Otto II, Margrave of Meissen...
, margrave
Margrave
A margrave or margravine was a medieval hereditary nobleman with military responsibilities in a border province of a kingdom. Border provinces usually had more exposure to military incursions from the outside, compared to interior provinces, and thus a margrave usually had larger and more active...
of Saxony
Saxony
The Free State of Saxony is a landlocked state of Germany, contingent with Brandenburg, Saxony Anhalt, Thuringia, Bavaria, the Czech Republic and Poland. It is the tenth-largest German state in area, with of Germany's sixteen states....
instigated two trade fairs in Leipzig, at Easter
Easter
Easter is the central feast in the Christian liturgical year. According to the Canonical gospels, Jesus rose from the dead on the third day after his crucifixion. His resurrection is celebrated on Easter Day or Easter Sunday...
(Jubilate) and Michaelmas
Michaelmas
Michaelmas, the feast of Saint Michael the Archangel is a day in the Western Christian calendar which occurs on 29 September...
. No other fair was to be held up to a mile away (Marktbann), and the bridges and streets were freed from toll. The Michaelmas fair was held at the church of St. Nikolai, built in 1176. At this time, there were fairs at other Saxon towns like Freiberg
Freiberg, Saxony
Freiberg is a city in the Free State of Saxony, Germany, administrative center of the Mittelsachsen district.-History:The city was founded in 1186, and has been a center of the mining industry in the Ore Mountains for centuries...
, Leisnig
Leisnig
Leisnig is a small town in the district of Mittelsachsen, federal Free State of Saxony in Germany.-History:A settlement in this location was first mentioned in 1046. The town features Mildenstein Castle which is over 1000 years old. The house Markt 13 shows the coat of arms of the family...
, Pegau
Pegau
Pegau is a town in the Leipzig district in the Free State of Saxony, Germany, situated in a fertile country, on the Weiße Elster, 18 m. S.W. from Leipzig by the railway to Zeitz....
and Regis as well.
In 1268 all foreign merchants travelling to or living in Leipzig got safe conduct for their persons and their goods, even if their Rulers were at war with Saxony. This led to the settlement of numerous merchants in Leipzig. Trade goods now included herring, cloth, wine and pepper.

In 1380, Leipzig got the privilege to force all passing merchants to offer their goods for sale (Stapelrecht).
A third fair, at the first of January was founded by Friedrich II of Saxony (the Gentle) in 1458. It had an Imperial privilege.

In 1507 Emperor Maximilian I
Maximilian I, Holy Roman Emperor
Maximilian I , the son of Frederick III, Holy Roman Emperor and Eleanor of Portugal, was King of the Romans from 1486 and Holy Roman Emperor from 1493 until his death, though he was never in fact crowned by the Pope, the journey to Rome always being too risky...
made the Leipzig fairs imperial fairs (Reichsmessen) and banned any fairs within a 15-mile radius around the town, which further increased Leipzig's importance. Towns like Halle
Halle, Saxony-Anhalt
Halle is the largest city in the German state of Saxony-Anhalt. It is also called Halle an der Saale in order to distinguish it from the town of Halle in North Rhine-Westphalia...
, Naumburg
Naumburg
Naumburg is a town in Germany, on the Saale River. It is in the district Burgenlandkreis in the Bundesland of Saxony-Anhalt. It is approximately southwest of Leipzig, south-southwest of Halle, and north-northeast of Jena....
, Erfurt
Erfurt
Erfurt is the capital city of Thuringia and the main city nearest to the geographical centre of Germany, located 100 km SW of Leipzig, 150 km N of Nuremberg and 180 km SE of Hannover. Erfurt Airport can be reached by plane via Munich. It lies in the southern part of the Thuringian...
and Magdeburg
Magdeburg
Magdeburg , is the largest city and the capital city of the Bundesland of Saxony-Anhalt, Germany. Magdeburg is situated on the Elbe River and was one of the most important medieval cities of Europe....
now became dependent on the Leipzig trade.

In 1523, the Augsburg
Augsburg
Augsburg is a city in the south-west of Bavaria, Germany. It is a university town and home of the Regierungsbezirk Schwaben and the Bezirk Schwaben. Augsburg is an urban district and home to the institutions of the Landkreis Augsburg. It is, as of 2008, the third-largest city in Bavaria with a...
merchant family Welser
Welser
Welser is the surname of an important German banking and merchant family, originally from Augsburg. Along with the Fugger family, the Welser family controlled various sectors of the European economy, and accumulated enormous wealth through trade and the German colonization of the...
built a big house with shops at the Markt 8 (today's Barthels Hof), the rival Fugger
Fugger
The Fugger family was a historically prominent group of European bankers, members of the fifteenth and sixteenth-century mercantile patriciate of Augsburg, international mercantile bankers, and venture capitalists like the Welser and the Höchstetter families. This banking family replaced the de'...
s had factories as well.

In the 18th century, Leipzig became the centre for trade with Polish and English goods. It was called 'the marketplace of all Europe'. In 1678/87, a stock exchange was built (Alte Handelsbörse, Naschmarkt, destroyed in 1943, rebuilt).

In 1895, the old Jubilate-fair was replaced by the modern "Muster-Messe", dominated by factory owners presenting samples of their goods. 30 fair-houses (Messe-Häuser) were built in the years leading up to 1917. They normally contained several interconnected courtyards with shops, storage areas and living space (Mädler-Passage, Petershof, Handelshof, Specks Hof, Drei Könige etc.). Leipzig became the main German fair for books and consumer goods. The fair's MM symbol was designed by Erich Gruner in 1917.

In 1920 the technical fairground was opened in the southeast of the town, between Reudnitz and the Battle of Leipzig
Battle of Leipzig
The Battle of Leipzig or Battle of the Nations, on 16–19 October 1813, was fought by the coalition armies of Russia, Prussia, Austria and Sweden against the French army of Napoleon. Napoleon's army also contained Polish and Italian troops as well as Germans from the Confederation of the Rhine...
Monument. It included 19 pavilions in 1940. Between the wars, the Ring-Messehaus and the Messehaus Bugra were built. During the war, the area of the technical fair was used for military production and partly destroyed by bombs.

In 1946, the first spring fair ('Peace fair') took place. When the GDR joined the RGW (Comecon
Comecon
The Council for Mutual Economic Assistance , 1949–1991, was an economic organisation under hegemony of Soviet Union comprising the countries of the Eastern Bloc along with a number of communist states elsewhere in the world...
) in 1950, the fair was used to present the production of the fellow socialist countries. The technical fairground was rebuilt and contained over 50 pavilions.

Leipziger Messe GmbH was founded after the reunification of Germany in the early 1990s.
It is owned equally by Saxony
Saxony
The Free State of Saxony is a landlocked state of Germany, contingent with Brandenburg, Saxony Anhalt, Thuringia, Bavaria, the Czech Republic and Poland. It is the tenth-largest German state in area, with of Germany's sixteen states....
and the city of Leipzig
Leipzig
Leipzig Leipzig has always been a trade city, situated during the time of the Holy Roman Empire at the intersection of the Via Regia and Via Imperii, two important trade routes. At one time, Leipzig was one of the major European centres of learning and culture in fields such as music and publishing...
.
The firm employs about 300 people, working in the parent company and its subsidiaries.
There are two people leading the Leipziger Messe GmbH:
the CEO is Mr. W. Marzin and the CTO is Mr. J. Rahmen.
The subsidiaries are:

Leipziger Messe GmbH also has about 25 departments abroad, most of which are autonomous.