Encyclopedia
The Kingdom of Lithuania was a Lithuania
Lithuania
Lithuania , officially the Republic of Lithuania is a country in Northern Europe, the biggest of the three Baltic states. It is situated along the southeastern shore of the Baltic Sea, whereby to the west lie Sweden and Denmark...
n monarchy
Monarchy
A monarchy is a form of government in which the office of head of state is usually held until death or abdication and is often hereditary and includes a royal house. In some cases, the monarch is elected...
which existed from 1251 to roughly 1263. King Mindaugas
Mindaugas
Mindaugas was the first known Grand Duke of Lithuania and the only King of Lithuania. Little is known of his origins, early life, or rise to power; he is mentioned in a 1219 treaty as an elder duke, and in 1236 as the leader of all the Lithuanians...
was the first and only crowned king of Lithuania. The status of a kingdom was lost after Mindaugas' assassination in 1263. Other monarchs of Lithuania are referred to as Grand Dukes, even though their status was almost identical to that of a king. Two attempts were made to reestablish the Kingdom – by Vytautas the Great in 1430 and by the Council of Lithuania
Council of Lithuania
The Council of Lithuania , after July 11, 1918 The State Council of Lithuania , was convened at the Vilnius Conference that took place between September 18 and 23, 1917. The council was granted the executive authority of the Lithuanian people and was entrusted to establish an independent...
in 1918. 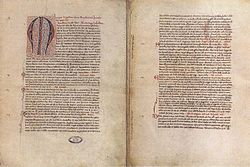 In the early 13th century, Lithuania was inhabited by various pagan
Lithuanian mythology
Lithuanian mythology is an example of Baltic mythology, developed by Lithuanians throughout the centuries.-History of scholarship:Surviving information about Baltic paganism in general is very sketchy and incomplete. As with most ancient Indo-European cultures Lithuanian mythology is an example of...
Baltic tribes, which began to organize themselves into a state – the Grand Duchy of Lithuania
Grand Duchy of Lithuania
The Grand Duchy of Lithuania was a European state from the 12th /13th century until 1569 and then as a constituent part of Polish-Lithuanian Commonwealth until 1791 when Constitution of May 3, 1791 abolished it in favor of unitary state. It was founded by the Lithuanians, one of the polytheistic...
. By 1230s, Mindaugas emerged as the leader of the Grand Duchy. In 1249, an internal war erupted between Mindaugas and his nephews Tautvilas
Tautvilas
Tautvilas was Duke of Polatsk and one of the sons of Dausprungas and nephews of King of Lithuania Mindaugas. Tautvilas together with his brother Edivydas and uncle Vykintas waged a civil war against Mindaugas...
and Edivydas. As each side searched for foreign allies, Mindaugas succeeded in convincing the Livonian Order
Livonian Order
The Livonian Order was an autonomous Livonian branch of the Teutonic Order and a member of the Livonian Confederation from 1435–1561. After being defeated by Samogitians in the 1236 Battle of Schaulen , the remnants of the Livonian Brothers of the Sword were incorporated into the Teutonic Knights...
not only to provide military assistance, but also to secure for him the royal crown of Lithuania in exchange for his conversion to Catholicism and some lands in western Lithuania. The status of a kingdom was granted on July 17, 1251, when the Bishop of Chełmno was ordered to crown Mindaugas by Pope Innocent IV
Pope Innocent IV
Pope Innocent IV , born Sinibaldo Fieschi, was pope from June 25, 1243 until his death in 1254.-Early life:...
. Two years later, Mindaugas and his wife Morta
Morta
Morta was the Grand Duchess of Lithuania and later Queen of Lithuania . There is very little known about her life; even her pre-Christianised name is unknown...
were crowned as the King and Queen of Lithuania. In 1255, Mindaugas received permission from Pope Alexander IV
Pope Alexander IV
Pope Alexander IV was Pope from 1254 until his death.Born as Rinaldo di Jenne, in Jenne , he was, on his mother's side, a member of the de' Conti di Segni family, the counts of Segni, like Pope Innocent III and Pope Gregory IX...
to crown his son as King of Lithuania.

The coronation and the alliance with the Livonian Order allowed a period of peace between Lithuania and Livonia. During that time the Lithuanians expanded east, while Livonia attempted to conquer Samogitia
Samogitia
Samogitia is one of the five ethnographic regions of Lithuania. It is located in northwestern Lithuania. Its largest city is Šiauliai/Šiaulē. The region has a long and distinct cultural history, reflected in the existence of the Samogitian dialect...
. Enticed by his nephew Treniota
Treniota
Treniota was the Grand Duke of Lithuania .Treniota was the nephew of Mindaugas, the first and only king of Lithuania. While Mindaugas had converted to Christianity in order to discourage Livonian Order and Teutonic Knights attacks on Lithuania, becoming king in the process, Treniota remained a...
, Mindaugas broke the peace after the Order was defeated in the Battle of Skuodas
Battle of Skuodas
The Battle of Skuodas or Schoden was a medieval battle fought in ca. 1259 near Skuodas in present-day Lithuania during the Northern Crusades. The Samogitian army of 3,000 invaded Courland and on their way back defeated the Livonian Order, killing 33 knights and many more low-rank soldiers...
in 1259 and Battle of Durbe
Battle of Durbe
-External links:**...
in 1260. Treniota's influence grew as he waged a war against the Order and his priorities began to diverge from those of Mindaugas. The conflict resulted in assassination of Mindaugas and two of his sons in 1263. The country reverted to paganism
Lithuanian mythology
Lithuanian mythology is an example of Baltic mythology, developed by Lithuanians throughout the centuries.-History of scholarship:Surviving information about Baltic paganism in general is very sketchy and incomplete. As with most ancient Indo-European cultures Lithuanian mythology is an example of...
and its status as a kingdom was lost. The state survived as the Grand Duchy of Lithuania and the subsequent monarchs are known as Grand Dukes as they could not be crowned as kings until they converted to Christianity (the Christianization of Lithuania
Christianization of Lithuania
The Christianization of Lithuania – Christianization of the Grand Duchy of Lithuania that took place in 1387, initiated by the King of Poland and Grand Duke of Lithuania Jogaila and his cousin Vytautas, that signified the official adoption of Christianity by Lithuanians, one of the last pagan...
occurred only in 1387).


Attempts to reestablish the kingdom

There was an attempt by Grand Duke Vytautas the Great
Vytautas the Great
Vytautas ; styled "the Great" from the 15th century onwards; c. 1350 October 27, 1430) was one of the most famous rulers of medieval Lithuania. Vytautas was the ruler of the Grand Duchy of Lithuania which chiefly encompassed the Lithuanians and Ruthenians...
(ruled 1392–1430) to receive the royal crown. At the time, He was proclaimed king, and Lithuania a kingdom, by Emperor Sigismund, Holy Roman Emperor
Sigismund, Holy Roman Emperor
Sigismund of Luxemburg KG was King of Hungary, of Croatia from 1387 to 1437, of Bohemia from 1419, and Holy Roman Emperor for four years from 1433 until 1437, the last Emperor of the House of Luxemburg. He was also King of Italy from 1431, and of Germany from 1411...
in 1430, but the royal crown, which was sent by Sigismund to Vytautas, was intercepted by Polish noblemen
Szlachta
The szlachta was a legally privileged noble class with origins in the Kingdom of Poland. It gained considerable institutional privileges during the 1333-1370 reign of Casimir the Great. In 1413, following a series of tentative personal unions between the Grand Duchy of Lithuania and the Kingdom of...
. Soon afterwards Vytautas died, without being crowned as king.

After Lithuania declared independence
Act of Independence of Lithuania
The Act of Independence of Lithuania or Act of February 16 was signed by the Council of Lithuania on February 16, 1918, proclaiming the restoration of an independent State of Lithuania, governed by democratic principles, with Vilnius as its capital. The Act was signed by all twenty...
in February 1918, the monarchy was reestablished and the 2nd Duke of Urach
Duke of Urach
The title Duke of Urach was created in the Kingdom of Württemberg for Friedrich Wilhelm Alexander Ferdinand, Count of Württemberg on 28 March 1867, with the style of HSH."Urach" is pronounced Oo-raakh -Family:...
was invited to become King Mindaugas II. However, the monarchy was short-lived and Mindaugas II never visited Lithuania. The Kingdom of Lithuania
Kingdom of Lithuania (1918)
The Kingdom of Lithuania was a short-lived constitutional monarchy created towards the end of World War I when Lithuania was under occupation by the German Empire. The Council of Lithuania declared Lithuania's independence on February 16, 1918, but the Council was unable to form a government,...
was a client-state of the German Empire
German Empire
The German Empire refers to Germany during the "Second Reich" period from the unification of Germany and proclamation of Wilhelm I as German Emperor on 18 January 1871, to 1918, when it became a federal republic after defeat in World War I and the abdication of the Emperor, Wilhelm II.The German...
and following Germany's defeat in World War I in fall 1918, the idea of a monarchy was abandoned in favor of a democratic republic.