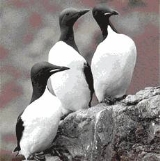 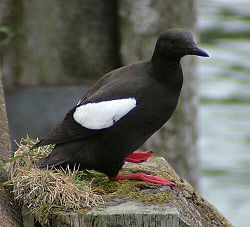 Guillemots is the common name
Common name
A common name of a taxon or organism is a name in general use within a community; it is often contrasted with the scientific name for the same organism...
for several species of seabird
Seabird
Seabirds are birds that have adapted to life within the marine environment. While seabirds vary greatly in lifestyle, behaviour and physiology, they often exhibit striking convergent evolution, as the same environmental problems and feeding niches have resulted in similar adaptations...
in the auk
Auk
An auk is a bird of the family Alcidae in the order Charadriiformes. Auks are superficially similar to penguins due to their black-and-white colours, their upright posture and some of their habits...
family (part of the order Charadriiformes
Charadriiformes
Charadriiformes is a diverse order of small to medium-large birds. It includes about 350 species and has members in all parts of the world. Most Charadriiformes live near water and eat invertebrates or other small animals; however, some are pelagic , some occupy deserts and a few are found in thick...
). In British use, the term comprises two genera: Uria
Uria
Uria is a genus of seabirds in the auk family known in Britain as guillemots, in most of North America as murres, and in Newfoundland and Labrador as turr. These are medium-sized birds with mainly brown or black plumage in the breeding season...
and Cepphus
Cepphus
Cepphus is a genus of seabirds in the auk family also referred to as true guillemots or, in North America, simply as guillemots. These are medium-sized birds with mainly black plumage in the breeding season, thin dark bills and red legs and feet. Two species have white wing patches, the third has...
. In North America
North America
North America is a continent wholly within the Northern Hemisphere and almost wholly within the Western Hemisphere. It is also considered a northern subcontinent of the Americas...
the Uria species are called "murres" and only the Cepphus species are called "guillemots". This word of French origin apparently derives from a form of the name William
William (name)
William is a popular given name of old Germanic origin. It became very popular in the English language after the Norman conquest of England in 1066, and remained so throughout the Middle Ages and into the modern era...
, cf. .

The two living species of Uria, together with the Razorbill
Razorbill
The Razorbill is colonial seabird that will only come to land in order to breed. It is the largest living member of the Auk family. This agile bird will choose only one partner for life and females will lay one egg per year. Razorbills will nest along coastal cliffs in enclosed or slightly exposed...
, Dovekie and the extinct Great Auk
Great Auk
The Great Auk, Pinguinus impennis, formerly of the genus Alca, was a large, flightless alcid that became extinct in the mid-19th century. It was the only modern species in the genus Pinguinus, a group of birds that formerly included one other species of flightless giant auk from the Atlantic Ocean...
, make up the tribe
Tribe (biology)
In biology, a tribe is a taxonomic rank between family and genus. It is sometimes subdivided into subtribes.Some examples include the tribes: Canini, Acalypheae, Hominini, Bombini, and Antidesmeae.-See also:* Biological classification* Rank...
Alcini. They have distinctly white bellies, thicker, and longer bills than Cepphus and form very dense colonies on cliffs during the reproductive season.

The three living species of Cepphus form a tribe of their own: Cepphini. They are smaller than the Uria species and have black bellies, rounder heads and bright red feet.

Some prehistoric species are also known:


U. brodkorbi is the only known occurrence of the Alcini tribe in the temperate to subtropical Pacific, except for the very fringe of the range of U. aalge.

As in other genera of auks, fossils of prehistoric forms of Cepphus have been found:


The latter two resemble the extant species, but because of the considerable distance in time or space from their current occurrence, they may represent distinct species.
The source of this article is wikipedia, the free encyclopedia.  The text of this article is licensed under the GFDL.