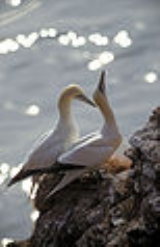 Gannets are seabirds comprising the genus Morus, in the family
Family (biology)
In biological classification, family is* a taxonomic rank. Other well-known ranks are life, domain, kingdom, phylum, class, order, genus, and species, with family fitting between order and genus. As for the other well-known ranks, there is the option of an immediately lower rank, indicated by the...
Sulidae
Sulidae
The bird family Sulidae comprises the gannets and boobies. Collectively called sulidas, they are medium-large coastal seabirds that plunge-dive for fish and similar prey. The ten species in this family are often considered congeneric in older sources, placing all in the genus Sula...
, closely related to the boobies
Booby
A booby is a seabird in the genus Sula, part of the Sulidae family. Boobies are closely related to the gannets , which were formerly included in Sula.-Description:...
.

The gannets are large black and white bird
Bird
Birds are feathered, winged, bipedal, endothermic , egg-laying, vertebrate animals. Around 10,000 living species and 188 families makes them the most speciose class of tetrapod vertebrates. They inhabit ecosystems across the globe, from the Arctic to the Antarctic. Extant birds range in size from...
s with yellow heads. They have long pointed wings and long bills. Northern gannet
Northern Gannet
The Northern Gannet is a seabird and is the largest member of the gannet family, Sulidae.- Description :Young birds are dark brown in their first year, and gradually acquire more white in subsequent seasons until they reach maturity after five years.Adults are long, weigh and have a wingspan...
s are the largest seabirds in the North Atlantic, with a wingspan of up to 2 metres. The other two species occur in the temperate seas around southern Africa
Southern Africa
Southern Africa is the southernmost region of the African continent, variably defined by geography or geopolitics. Within the region are numerous territories, including the Republic of South Africa ; nowadays, the simpler term South Africa is generally reserved for the country in English.-UN...
, southern Australia
Australia
Australia , officially the Commonwealth of Australia, is a country in the Southern Hemisphere comprising the mainland of the Australian continent, the island of Tasmania, and numerous smaller islands in the Indian and Pacific Oceans. It is the world's sixth-largest country by total area...
and New Zealand
New Zealand
New Zealand is an island country in the south-western Pacific Ocean comprising two main landmasses and numerous smaller islands. The country is situated some east of Australia across the Tasman Sea, and roughly south of the Pacific island nations of New Caledonia, Fiji, and Tonga...
.

Gannets hunt fish
Fish
Fish are a paraphyletic group of organisms that consist of all gill-bearing aquatic vertebrate animals that lack limbs with digits. Included in this definition are the living hagfish, lampreys, and cartilaginous and bony fish, as well as various extinct related groups...
by diving
Diving bird
Diving birds are birds which plunge into water to catchfish or other food. They may enter the water from flight, as does the brown pelican , or they may dive from the surface of the water...
from a height into the sea and pursuing their prey underwater. Gannets have a number of adaptations which enable them to do this:

Gannets can dive from a height of 30 m, achieving speeds of 100 km/h as they strike the water, enabling them to catch fish much deeper than most airborne birds.

The gannet's supposed capacity for eating large quantities of fish has led to "gannet" becoming a disapproving description of somebody who eats excessively, similar to "glutton
Gluttony
Gluttony, derived from the Latin gluttire meaning to gulp down or swallow, means over-indulgence and over-consumption of food, drink, intoxicants or wealth items to the point of extravagance or waste...
".

Gannets are colonial
Bird colony
A bird colony is a large congregation of individuals of one or more species of bird that nest or roost in close proximity at a particular location. Many kinds of birds are known to congregate in groups of varying size; a congregation of nesting birds is called a breeding colony...
breeders on islands and coasts, normally laying one chalky, blue egg. It takes five years for gannets to reach maturity. First-year birds are completely black, and subsequent sub-adult plumages show increasing amounts of white.

The most important nesting ground for Northern gannets is the United Kingdom
United Kingdom
The United Kingdom of Great Britain and Northern IrelandIn the United Kingdom and Dependencies, other languages have been officially recognised as legitimate autochthonous languages under the European Charter for Regional or Minority Languages...
with about two thirds of the world's population. These live mainly in Scotland
Scotland
Scotland is a country that is part of the United Kingdom. Occupying the northern third of the island of Great Britain, it shares a border with England to the south and is bounded by the North Sea to the east, the Atlantic Ocean to the north and west, and the North Channel and Irish Sea to the...
, including the Shetland Isles. The rest of the world's population is divided between Canada
Canada
Canada is a North American country consisting of ten provinces and three territories. Located in the northern part of the continent, it extends from the Atlantic Ocean in the east to the Pacific Ocean in the west, and northward into the Arctic Ocean...
, Ireland
Ireland
Ireland is an island to the northwest of continental Europe. It is the third-largest island in Europe and the twentieth-largest island on Earth...
, Faroe Islands
Faroe Islands
The Faroe Islands are an island group situated between the Norwegian Sea and the North Atlantic Ocean, approximately halfway between Scotland and Iceland. The Faroe Islands are a self-governing territory within the Kingdom of Denmark, along with Denmark proper and Greenland...
and Iceland
Iceland
Iceland , described as the Republic of Iceland, is a Nordic and European island country in the North Atlantic Ocean, on the Mid-Atlantic Ridge. Iceland also refers to the main island of the country, which contains almost all the population and almost all the land area. The country has a population...
, with small numbers in France
France
The French Republic , The French Republic , The French Republic , (commonly known as France , is a unitary semi-presidential republic in Western Europe with several overseas territories and islands located on other continents and in the Indian, Pacific, and Atlantic oceans. Metropolitan France...
(they are often seen in the Bay of Biscay
Bay of Biscay
The Bay of Biscay is a gulf of the northeast Atlantic Ocean located south of the Celtic Sea. It lies along the western coast of France from Brest south to the Spanish border, and the northern coast of Spain west to Cape Ortegal, and is named in English after the province of Biscay, in the Spanish...
), the Channel Islands
Channel Islands
The Channel Islands are an archipelago of British Crown Dependencies in the English Channel, off the French coast of Normandy. They include two separate bailiwicks: the Bailiwick of Guernsey and the Bailiwick of Jersey...
and Norway
Norway
Norway , officially the Kingdom of Norway, is a Nordic unitary constitutional monarchy whose territory comprises the western portion of the Scandinavian Peninsula, Jan Mayen, and the Arctic archipelago of Svalbard and Bouvet Island. Norway has a total area of and a population of about 4.9 million...
. The biggest Northern gannet colony is in the Scottish islands of St Kilda
St Kilda, Scotland
St Kilda is an isolated archipelago west-northwest of North Uist in the North Atlantic Ocean. It contains the westernmost islands of the Outer Hebrides of Scotland. The largest island is Hirta, whose sea cliffs are the highest in the United Kingdom and three other islands , were also used for...
; this colony alone comprises 20% of the entire world's population. Sulasgier off the coast of the Isle of Lewis, Bass Rock
Bass Rock
The Bass Rock, or simply The Bass, , is an island in the outer part of the Firth of Forth in the east of Scotland. It is approximately offshore, and north-east of North Berwick. It is a steep-sided volcanic rock, at its highest point, and is home to a large colony of gannets...
in the Firth of Forth
Firth of Forth
The Firth of Forth is the estuary or firth of Scotland's River Forth, where it flows into the North Sea, between Fife to the north, and West Lothian, the City of Edinburgh and East Lothian to the south...
, Grassholm
Grassholm
Grassholm is a small uninhabited island situated off the southwestern Pembrokeshire coast in Wales, lying west of Skomer. It is the westernmost point in Wales and is known for its huge colony of gannets...
in Pembrokeshire
Pembrokeshire
Pembrokeshire is a county in the south west of Wales. It borders Carmarthenshire to the east and Ceredigion to the north east. The county town is Haverfordwest where Pembrokeshire County Council is headquartered....
and Bonaventure Island
Bonaventure Island
Bonaventure Island is a Canadian island in the Gulf of St. Lawrence located off the southern coast of Quebec's Gaspé Peninsula, southeast of the village of Percé...
, Quebec
Quebec
Quebec or is a province in east-central Canada. It is the only Canadian province with a predominantly French-speaking population and the only one whose sole official language is French at the provincial level....
are also important Northern gannet breeding sites.

The Skellig Islands
Skellig Islands
The Skellig Islands , once known as the Skellocks, are two small, steep, and rocky islands lying about 13 km west of Bolus Head on the Iveragh Peninsula in County Kerry, Ireland...
off the south-west coast of Ireland
Ireland
Ireland is an island to the northwest of continental Europe. It is the third-largest island in Europe and the twentieth-largest island on Earth...
hold some 27,000 pairs of Northern Gannets, the second largest colony in the world.


Most fossil gannets are from the Late Miocene
Miocene
The Miocene is a geological epoch of the Neogene Period and extends from about . The Miocene was named by Sir Charles Lyell. Its name comes from the Greek words and and means "less recent" because it has 18% fewer modern sea invertebrates than the Pliocene. The Miocene follows the Oligocene...
or Pliocene
Pliocene
The Pliocene Epoch is the period in the geologic timescale that extends from 5.332 million to 2.588 million years before present. It is the second and youngest epoch of the Neogene Period in the Cenozoic Era. The Pliocene follows the Miocene Epoch and is followed by the Pleistocene Epoch...
, a time when the diversity of seabird
Seabird
Seabirds are birds that have adapted to life within the marine environment. While seabirds vary greatly in lifestyle, behaviour and physiology, they often exhibit striking convergent evolution, as the same environmental problems and feeding niches have resulted in similar adaptations...
s in general was much higher than today. It is not completely clear what caused the decline in species at the end of the Pleistocene; increased competition due to the spread of marine mammal
Marine mammal
Marine mammals, which include seals, whales, dolphins, and walruses, form a diverse group of 128 species that rely on the ocean for their existence. They do not represent a distinct biological grouping, but rather are unified by their reliance on the marine environment for feeding. The level of...
s and/or supernova activity which led to mass extinctions of marine life are usually assumed to have played a role.

The genus Morus is much better documented in the fossil record than Sula, though the latter is more numerous today. The reasons are not clear; it might be that boobies were better-adapted or simply "lucky" to occur in the right places for dealing with the challenges of the Late Pliocene ecological change, or it could be that many more fossil boobies still await discovery. Notably, gannets are today restricted to temperate oceans while boobies are also found in tropical waters, whereas several of the prehistoric gannet species had a more equatorial distribution than their congeners of today.

Fossil species of gannets are: