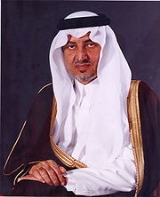 Encyclopedia
Prince Khalid al-Faisal bin Abdul-Aziz Al Saud ' onMouseout='HidePop("90151")' href="/topics/Mecca">Mecca
Mecca
Mecca is a city in the Hijaz and the capital of Makkah province in Saudi Arabia. The city is located inland from Jeddah in a narrow valley at a height of above sea level...
) is the current Governor of the Makkah Province. He previously served as the Governor of the Asir Province from 1971 to 2007.

He is a member of the Saudi royal family
House of Saud
The House of Saud , also called the Al Saud, is the ruling royal family of Saudi Arabia and one of the wealthiest and most powerful dynasties in the world. The family holds thousands of members...
and is the eldest surviving son of the late King Faisal
Faisal of Saudi Arabia
Faisal bin Abdul-Aziz Al Saud was King of Saudi Arabia from 1964 to 1975. As king, he is credited with rescuing the country's finances and implementing a policy of modernization and reform, while his main foreign policy themes were pan-Islamic Nationalism, anti-Communism, and pro-Palestinian...
. He is the half-brother of Foreign Minister Prince Saud al-Faisal and former Saudi Ambassador to the United Kingdom Turki al-Faisal.

Khalid was born 1940 in Mecca
Mecca
Mecca is a city in the Hijaz and the capital of Makkah province in Saudi Arabia. The city is located inland from Jeddah in a narrow valley at a height of above sea level...
. Like Faisal's other children, he was educated abroad. He attended the Hun School of Princeton
Hun School of Princeton
The Hun School of Princeton is a private, coeducational, secondary boarding school located in Princeton Township, New Jersey, United States. The school has a Princeton, New Jersey mailing address. The school serves students from grades 6 through high school. Currently, the headmaster is Jonathan...
, New Jersey
New Jersey
New Jersey is a state in the Northeastern and Middle Atlantic regions of the United States. , its population was 8,791,894. It is bordered on the north and east by the state of New York, on the southeast and south by the Atlantic Ocean, on the west by Pennsylvania and on the southwest by Delaware...
and graduated with a Bachelor of Arts
Bachelor of Arts
A Bachelor of Arts , from the Latin artium baccalaureus, is a bachelor's degree awarded for an undergraduate course or program in either the liberal arts, the sciences, or both...
in Political Economy
Political economy
Political economy originally was the term for studying production, buying, and selling, and their relations with law, custom, and government, as well as with the distribution of national income and wealth, including through the budget process. Political economy originated in moral philosophy...
from the University of Oxford
University of Oxford
The University of Oxford is a university located in Oxford, United Kingdom. It is the second-oldest surviving university in the world and the oldest in the English-speaking world. Although its exact date of foundation is unclear, there is evidence of teaching as far back as 1096...
in 1966. He served as Director General of the Presidency of Youth Welfare.

Khalid was governor of the Asir Province in southwestern Saudi Arabia
Saudi Arabia
The Kingdom of Saudi Arabia , commonly known in British English as Saudi Arabia and in Arabic as as-Sa‘ūdiyyah , is the largest state in Western Asia by land area, constituting the bulk of the Arabian Peninsula, and the second-largest in the Arab World...
from 1971 to 2007. As governor, he held majlis
Majlis
' , is an Arabic term meaning "a place of sitting", used in the context of "council", to describe various types of special gatherings among common interest groups be it administrative, social or religious in countries with linguistic or cultural connections to Islamic countries...
(open-house meeting with regular citizens) twice a day. The region also had its first telephone line under his governorship.

According to a leaked Wikileaks
Wikileaks
WikiLeaks is an international self-described not-for-profit organisation that publishes submissions of private, secret, and classified media from anonymous news sources, news leaks, and whistleblowers. Its website, launched in 2006 under The Sunshine Press organisation, claimed a database of more...
cable, Khalid went to extraordinary lengths to renovate his late father's palace to host a party for Prince Charles
Charles, Prince of Wales
Prince Charles, Prince of Wales is the heir apparent and eldest son of Queen Elizabeth II and Prince Philip, Duke of Edinburgh. Since 1958 his major title has been His Royal Highness The Prince of Wales. In Scotland he is additionally known as The Duke of Rothesay...
, during the Prince of Wales' visit to the kingdom in 2006. The cable revealed that at the time, Khalid had been living in the old palace which was in dire need of renovation. He directed a Western business associate to renovate the palace in three weeks and rewarded the businessman with $13,000 when Prince Charles was impressed with the palace. Khalid has since built a new palace while the old palace has been converted into a university.

On May 16, 2007, Khalid was appointed Governor of the Makkah Province by King Abdullah
Abdullah of Saudi Arabia
Abdullah bin Abdul-Aziz Al Saud, Custodian of the Two Holy Mosques, is the King of Saudi Arabia. He succeeded to the throne on 1 August 2005 upon the death of his half-brother, King Fahd. When Crown Prince, he governed Saudi Arabia as regent from 1998 to 2005...
, replacing Prince Abdul-Majeed bin Abdul-Aziz Al Saud who died in office. The province includes the Muslim holy city of Mecca
Mecca
Mecca is a city in the Hijaz and the capital of Makkah province in Saudi Arabia. The city is located inland from Jeddah in a narrow valley at a height of above sea level...
and the second largest city in Saudi Arabia, Jeddah
Jeddah
Jeddah, Jiddah, Jidda, or Jedda is a city located on the coast of the Red Sea and is the major urban center of western Saudi Arabia. It is the largest city in Makkah Province, the largest sea port on the Red Sea, and the second largest city in Saudi Arabia after the capital city, Riyadh. The...
. In 2010, he ordered hotels, restaurants, shops and wedding halls in the province to drop all their non-Arabic
Arabic language
Arabic is a name applied to the descendants of the Classical Arabic language of the 6th century AD, used most prominently in the Quran, the Islamic Holy Book...
names and use Arabic only for signboards.

As governor, he plays a major role in managing the annual Hajj
Hajj
The Hajj is the pilgrimage to Mecca, Saudi Arabia. It is one of the largest pilgrimages in the world, and is the fifth pillar of Islam, a religious duty that must be carried out at least once in their lifetime by every able-bodied Muslim who can afford to do so...
in Mecca, the world's largest religious pilgrimage.

Khalid has been mentioned as a future king when succession in the Al Saud passes on to the next generation. However, the al-Faisal brothers are said to be regarded unfavorably within the royal family due to their perceived air of intellectual superiority.

According to leaked diplomatic cables, he traveled to Beirut
Beirut
Beirut is the capital and largest city of Lebanon, with a population ranging from 1 million to more than 2 million . Located on a peninsula at the midpoint of Lebanon's Mediterranean coastline, it serves as the country's largest and main seaport, and also forms the Beirut Metropolitan...
in 2009 to meet with Lebanese parliamentarians.

In June 2011, Khalid presided at the opening of the Rabigh
Rabigh
Rabigh is an ancient town on the western coast of Saudi Arabia . It is in Makkah Province. It used to be named "Al-Johfa" until the early years of the 17th century. In some ancient stories the town had been completely destroyed through a sea water...
's expansion of its desalination plant.

Prince Khalid is the Managing Director of the King Faisal Foundation
King Faisal Foundation
The King Faisal Foundation was established in 1976 by the sons of King Faisal of Saudi Arabia. The Director-General is HRH Prince Khalid Al-Faisal...
, one of the largest philanthropic and charitable organisations in the world. The Foundation runs Alfaisal University
Alfaisal University
Alfaisal University is a private, non-profit, research university located in Riyadh, Saudi Arabia. It is the second co-educational university in Saudi Arabia after KAUST...
in Riyadh
Riyadh
Riyadh is the capital and largest city of Saudi Arabia. It is also the capital of Riyadh Province, and belongs to the historical regions of Najd and Al-Yamama. It is situated in the center of the Arabian Peninsula on a large plateau, and is home to 5,254,560 people, and the urban center of a...
, where Khalid is the Chairman of the Board of Trustees. He is the founder and current president of the organisation Painting and Patronage
Painting and Patronage
Painting & Patronage is a prominent cultural and artistic exchange programme between Saudi Arabia and the international community. It was founded in 1999 by Prince Khalid Al-Faisal, son of the late King Faisal bin Abdul Aziz...
.

Khalid has criticized negative coverage of Saudi Arabia by the Western media. He spoke out against misconceptions that characterize Saudi society as backwards and uneducated.

Prince Khalid is an avid painter, poet, and patron of the arts. In 1999, he founded Painting and Patronage
Painting and Patronage
Painting & Patronage is a prominent cultural and artistic exchange programme between Saudi Arabia and the international community. It was founded in 1999 by Prince Khalid Al-Faisal, son of the late King Faisal bin Abdul Aziz...
to "build and foster valuable bridges of cultural, artistic and educational understanding between the Arab world and the international community". While he was Governor of Asir, Khalid founded the Literary Club of Abha, the Abha Singing Festival, the Abha Prize for cultural excellence, and the Al-Miftaha Visual Arts Village in the capital city Abha
Abha
Abha is the capital of Asir province in Saudi Arabia. It is situated at 2,200 metres above sea level in the fertile mountains of south-western Saudi Arabia near the National Park of Asir. Its mild climate makes it a popular tourist destination for Saudis...
. As Governor of Makkah, he established the Cultural Council of Makkah.

He is a close friend of Prince Charles, who is one of the most prominent supporters of Painting and Patronage.

He is married to Princess Al-Anoud bint Abdullah bin Mohammad bin Abdul-Rahman Al Saud. His son, Prince Bandar bin Khalid bin Faisal Al Saud, is the chairman of the board of directors of Al-Watan
Al-Watan (Saudi Arabia)
Al-Watan is a leading reformist newspaper in Saudi Arabia. The main production centre is at Abha in the south of the country, close to the Yemen border.-External links:*...
, a reformist newspaper.