The was the main ocean-going component of the Imperial Japanese Navy
Imperial Japanese Navy
The Imperial Japanese Navy was the navy of the Empire of Japan from 1869 until 1947, when it was dissolved following Japan's constitutional renunciation of the use of force as a means of settling international disputes...
. The Combined Fleet was not a standing force, but a temporary force formed for the duration of a conflict or major naval maneuvers from various units normally under separate commands in peacetime.

The Combined Fleet was formally created on 18 July 1894 by the merger of the Standing Fleet and the Western Fleet. The Standing Fleet (also known as the Readiness Fleet) contained the navy's most modern and combat-capable warships. The Western Fleet was a reserve force consisting primarily of obsolete ships deemed unsuitable for front-line combat operations, but still suitable for commerce protection and coastal defense. Vice-admiral Itoh Sukeyuki
Itoh Sukeyuki
- Notes :...
was appointed the first Commander-in-Chief
Commander-in-Chief
A commander-in-chief is the commander of a nation's military forces or significant element of those forces. In the latter case, the force element may be defined as those forces within a particular region or those forces which are associated by function. As a practical term it refers to the military...
of the Combined Fleet. for the duration of the first Sino-Japanese war
First Sino-Japanese War
The First Sino-Japanese War was fought between Qing Dynasty China and Meiji Japan, primarily over control of Korea...
against China.

The Combined Fleet was re-formed during the Russo-Japanese War
Russo-Japanese War
The Russo-Japanese War was "the first great war of the 20th century." It grew out of rival imperial ambitions of the Russian Empire and Japanese Empire over Manchuria and Korea...
of 1904–05 to provide a unified overall command for the three separate fleets in the Imperial Japanese Navy. The IJN 1st Fleet
IJN 1st Fleet
The was the main battleship fleet of the Imperial Japanese Navy.-History:First established on 28 December 1903, the IJN 1st Fleet was created during the Russo-Japanese War when the Imperial General Headquarters divided the Readiness Fleet into a mobile strike force of cruisers and destroyers to...
was the main battleship
Battleship
A battleship is a large armored warship with a main battery consisting of heavy caliber guns. Battleships were larger, better armed and armored than cruisers and destroyers. As the largest armed ships in a fleet, battleships were used to attain command of the sea and represented the apex of a...
force, which formed the backbone of the navy and was intended to be used in a traditional line-of-battle showdown with an equivalent enemy battleship fleet (kantai kessen
Kantai kessen
The was a naval strategy adopted by the Imperial Japanese Navy following the Russo-Japanese War. It called on the use of a strong battleship force, which would destroy an invading fleet as it approached Japan after suffering losses through attrition as it penetrated Japanese perimeter defenses.The...
). The IJN 2nd Fleet
IJN 2nd Fleet
The was a fleet of the Imperial Japanese Navy.-History:First established on 28 December 1903, the IJN 2nd Fleet was created by the Imperial General Headquarters as a mobile strike force of cruisers and destroyers to pursue the Imperial Russian Navy's Vladivostok-based cruiser squadron while the...
was a fast, mobile strike force with armored cruiser
Armored cruiser
The armored cruiser was a type of warship of the late 19th and early 20th centuries. Like other types of cruiser, the armored cruiser was a long-range, independent warship, capable of defeating any ship apart from a battleship, and fast enough to outrun any battleships it encountered.The first...
s and protected cruiser
Protected cruiser
The protected cruiser is a type of naval cruiser of the late 19th century, so known because its armoured deck offered protection for vital machine spaces from shrapnel caused by exploding shells above...
s. The IJN 3rd Fleet
IJN 3rd Fleet
The was a fleet of the Imperial Japanese Navy, which was created on six separate occasions.-Russo-Japanese War:First established on 28 December 1903, the IJN 3rd Fleet was created by the Imperial General Headquarters as an administrative unit to manage various vessels considered too obsolete for...
was primarily a reserve fleet of obsolete vessels considered too weak for front-line combat service, but which could still be used in the operation to blockade Port Arthur
Battle of Port Arthur
The Battle of Port Arthur was the starting battle of the Russo-Japanese War...
. Admiral Togo Heihachiro
Togo Heihachiro
Fleet Admiral Marquis was a Fleet Admiral in the Imperial Japanese Navy and one of Japan's greatest naval heroes. He was termed by Western journalists as "the Nelson of the East".-Early life:...
was commander-in-chief
Commander-in-Chief
A commander-in-chief is the commander of a nation's military forces or significant element of those forces. In the latter case, the force element may be defined as those forces within a particular region or those forces which are associated by function. As a practical term it refers to the military...
of the Combined Fleet during the Russo-Japanese War.

The Combined Fleet was not a permanent organization, but was temporarily created when necessary—either during wartime or during fleet maneuvers. Thus, during the period from 1905–1924, the Combined Fleet was created only sporadically as the occasion or circumstances dictated, and disbanded immediately afterwards.

From 1933, with the Manchurian Incident and the increasing tension with China, a permanent HQ staff for the Combined Fleet was established. By the late 1930s, it included most of Japan's warships—only the base units, the Special Naval Landing Forces, and the China Area Fleet lay outside the Combined Fleet. 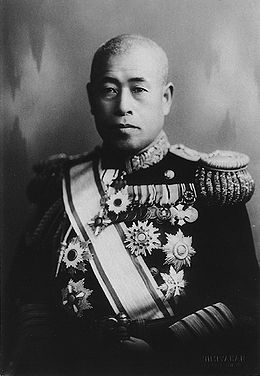 The Combined Fleet came under command of the Imperial General Headquarters
Imperial General Headquarters
The as part of the Supreme War Council was established in 1893 to coordinate efforts between the Imperial Japanese Army and Imperial Japanese Navy during wartime...
in 1937. With the start of the Pacific War
Pacific War
The Pacific War, also sometimes called the Asia-Pacific War refers broadly to the parts of World War II that took place in the Pacific Ocean, its islands, and in East Asia, then called the Far East...
with the attack on Pearl Harbor
Attack on Pearl Harbor
The attack on Pearl Harbor was a surprise military strike conducted by the Imperial Japanese Navy against the United States naval base at Pearl Harbor, Hawaii, on the morning of December 7, 1941...
carried out by the Combined Fleet's Kido Butai
1st Air Fleet of the Imperial Japanese Navy
The Imperial Japanese Navy at the beginning of World War II contained the world's largest carrier fleet. At the centre, was the 1st Air Fleet which was a grouping of naval aircraft and aircraft carriers...
, the Combined Fleet became almost synonymous with the Imperial Japanese Navy. It comprised the battleships, aircraft carrier
Aircraft carrier
An aircraft carrier is a warship designed with a primary mission of deploying and recovering aircraft, acting as a seagoing airbase. Aircraft carriers thus allow a naval force to project air power worldwide without having to depend on local bases for staging aircraft operations...
s, aircraft
Aircraft
An aircraft is a vehicle that is able to fly by gaining support from the air, or, in general, the atmosphere of a planet. An aircraft counters the force of gravity by using either static lift or by using the dynamic lift of an airfoil, or in a few cases the downward thrust from jet engines.Although...
, and the components that made up the main fighting strength of the IJN. It was first mobilized on the whole for the Battle of Midway
Battle of Midway
The Battle of Midway is widely regarded as the most important naval battle of the Pacific Campaign of World War II. Between 4 and 7 June 1942, approximately one month after the Battle of the Coral Sea and six months after Japan's attack on Pearl Harbor, the United States Navy decisively defeated...
. After the devastating carrier losses at Midway and in the Solomon Islands campaign
Solomon Islands campaign
The Solomon Islands campaign was a major campaign of the Pacific War of World War II. The campaign began with Japanese landings and occupation of several areas in the British Solomon Islands and Bougainville, in the Territory of New Guinea, during the first six months of 1942...
, the Navy re-organized into a number of "Area Fleets" for local operational control of various geographic zones. The Combined Fleet then evolved into more of an administrative organization.

As the war situation deteriorated for the Japanese and the territories controlled by the "Area Fleets" fell one after another to the United States Navy
United States Navy
The United States Navy is the naval warfare service branch of the United States Armed Forces and one of the seven uniformed services of the United States. The U.S. Navy is the largest in the world; its battle fleet tonnage is greater than that of the next 13 largest navies combined. The U.S...
, the Imperial General Headquarters
Imperial General Headquarters
The as part of the Supreme War Council was established in 1893 to coordinate efforts between the Imperial Japanese Army and Imperial Japanese Navy during wartime...
and the Imperial Japanese Navy General Staff
Imperial Japanese Navy General Staff
The was the highest organ within the Imperial Japanese Navy. In charge of planning and operations, it was headed by an Admiral headquartered in Tokyo.-History:...
acted to force the American fleet into a "decisive battle" in the Philippines
Philippines
The Philippines , officially known as the Republic of the Philippines , is a country in Southeast Asia in the western Pacific Ocean. To its north across the Luzon Strait lies Taiwan. West across the South China Sea sits Vietnam...
per the kantai kessen
Kantai kessen
The was a naval strategy adopted by the Imperial Japanese Navy following the Russo-Japanese War. It called on the use of a strong battleship force, which would destroy an invading fleet as it approached Japan after suffering losses through attrition as it penetrated Japanese perimeter defenses.The...
philosophy. In the resultant Battle of the Philippine Sea
Battle of the Philippine Sea
The Battle of the Philippine Sea was a decisive naval battle of World War II which effectively eliminated the Imperial Japanese Navy's ability to conduct large-scale carrier actions. It took place during the United States' amphibious invasion of the Mariana Islands during the Pacific War...
and the Battle of Leyte Gulf
Battle of Leyte Gulf
The Battle of Leyte Gulf, also called the "Battles for Leyte Gulf", and formerly known as the "Second Battle of the Philippine Sea", is generally considered to be the largest naval battle of World War II and, by some criteria, possibly the largest naval battle in history.It was fought in waters...
the Japanese fleet was decimated. The remnants of the Combined Fleet fled to Okinawa, but further operations were hindered by lack of fuel and air cover. By the time of the final suicide mission of the battleship Yamato
Japanese battleship Yamato
, named after the ancient Japanese Yamato Province, was the lead ship of the Yamato class of battleships that served with the Imperial Japanese Navy during World War II. She and her sister ship, Musashi, were the heaviest and most powerfully armed battleships ever constructed, displacing...
in Operation Ten-Go
Operation Ten-Go
was the last major Japanese naval operation in the Pacific Theater of World War II. Other renderings of this operation's title in English include Operation Heaven One and Ten-ichi-gō....
, the Combined Fleet had ceased to exist as an effective combat force. The Combined Fleet was formally dissolved on 10 October 1945.


Commanders of the IJN Combined Fleet