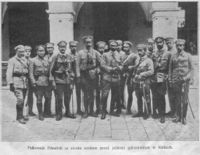 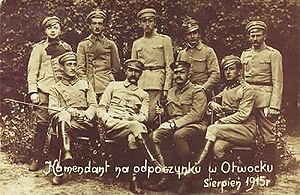 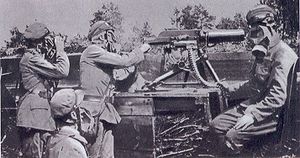 Polish Legions was the name of Polish armed forces created in August 1914 in Galicia. Thanks to the efforts of KSSN and the Polish members of the Austrian parliament, the unit became an independent formation of the Austro-Hungarian Army
Austro-Hungarian Army
The Austro-Hungarian Army was the ground force of the Austro-Hungarian Dual Monarchy from 1867 to 1918. It was composed of three parts: the joint army , the Austrian Landwehr , and the Hungarian Honvédség .In the wake of fighting between the...
. They were composed mostly of former members of various scouting
Scouting
Scouting, also known as the Scout Movement, is a worldwide youth movement with the stated aim of supporting young people in their physical, mental and spiritual development, that they may play constructive roles in society....
organisations, including Drużyny Strzeleckie and Związek Strzelecki
Zwiazek Strzelecki
Związek Strzelecki "Strzelec" was a Polish paramilitary cultural and educational organization created in 1910 in Lwów as a legal front of Związek Walki Czynnej, and revived in Poland in 1991....
, as well as volunteers from all around the empire.

Józef Piłsudski in his order of 22 August declared formations of the Legions, but Austrian government officially agreed to it only on 27 August.

Initially the Polish Legions were composed of two legions: the Eastern and the Western, both formed on 27 August. After Russian victory in the Battle of Galicia Eastern Polish legion refused to fight against Russia and was disbanded on 21 September. On 19 December Western legion was transformed into three brigade
Brigade
A brigade is a major tactical military formation that is typically composed of two to five battalions, plus supporting elements depending on the era and nationality of a given army and could be perceived as an enlarged/reinforced regiment...
s.

The commanders of the Legions were:

The Legions took part in many battles against the forces of Imperial Russia, both in Galicia and in the Carpathian Mountains. Initially both the number of troops and the composition of units were changing rapidly. This changed after Piłsudski resigned his post in September 1916 and the Polish Legions were renamed to Polish Auxiliary Corps (Polski Korpus Posilkowy). In June 1916 the unit had approximately 25 000 soldiers.

After the Act of November 5 and the creation of puppet Kingdom of Poland, the Polish Legions were transferred under German command. However, most of the members of legionists refused to swear allegiance to the emperor and were interned in Beniaminów
Beniaminów
Beniaminów is a village in Poland. It has approximately 190 inhabitants and is located in the Masovian Voivodship, east of Warsaw, between Legionowo and Nieporęt.Within the village are remnants of a 19th-century fort....
and Szczypiorno
Szczypiorno
Szczypiorno is a municipal neighbourhood of the city of Kalisz, Poland. Formerly until 1976 a separate village at the outskirts of the city, it is best known as a seat of a World War I and Polish-Bolshevist War prisoner of war camp and the name-sake for szczypiorniak, the Polish language name for...
(Oath crisis
Oath crisis
The Oath crisis was a World War I political conflict between the Imperial German Army command and the Józef Piłsudski-led Polish Legions.Initially supporting the Central Powers against Imperial Russia, Piłsudski wanted to defeat one of the partitioning powers with the hands of the two remaining...
). Approximately 3 000 of them were drafted into the Austro-Hungarian army or the German Polnische Wehrmacht
Polnische Wehrmacht
Polska Siła Zbrojna, was a military formation created by Imperial Germany during World War I, as the armed forces of their puppet Kingdom of Poland. Polska Siła Zbrojna was established a part of the German Army, under German command...
and sent to the Italian Front, while approximately 7 500 stayed in the Austrian Polish Auxiliary Corps
Polish Auxiliary Corps
Polish Auxiliary Corps was the name of the Polish military formation in the Austro-Hungarian Army, based on the Polish Legions. It was created in the aftermath of the Oath crisis from the Legions on 20 September 1916 and existed until 19 February 1918...
. 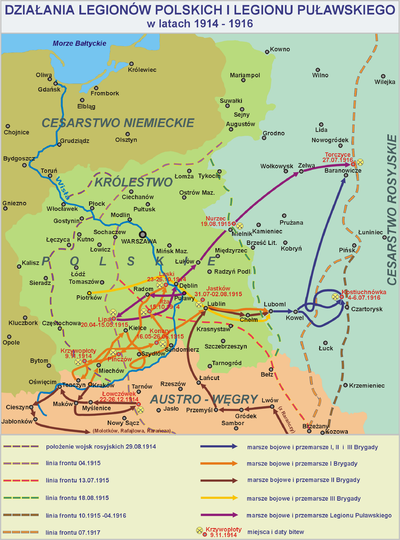 Officers who served in the Polish Legions