Encyclopedia
German Cameroon was a West African colony
German colonial empire
The German colonial empire was an overseas domain formed in the late 19th century as part of the German Empire. Short-lived colonial efforts by individual German states had occurred in preceding centuries, but Imperial Germany's colonial efforts began in 1884...
of the German Empire
German Empire
The German Empire refers to Germany during the "Second Reich" period from the unification of Germany and proclamation of Wilhelm I as German Emperor on 18 January 1871, to 1918, when it became a federal republic after defeat in World War I and the abdication of the Emperor, Wilhelm II.The German...
from 1884 to 1916 in the region of today's Republic of Cameroon
Cameroon
Cameroon, officially the Republic of Cameroon , is a country in west Central Africa. It is bordered by Nigeria to the west; Chad to the northeast; the Central African Republic to the east; and Equatorial Guinea, Gabon, and the Republic of the Congo to the south. Cameroon's coastline lies on the...
.

The first German trading post in the Duala area (present day Douala
Douala
Douala is the largest city in Cameroon and the capital of Cameroon's Littoral Province. Home to Cameroon's largest port and its major international airport, Douala International Airport, it is the commercial capital of the country...
) on the Kamerun River delta
River delta
A delta is a landform that is formed at the mouth of a river where that river flows into an ocean, sea, estuary, lake, reservoir, flat arid area, or another river. Deltas are formed from the deposition of the sediment carried by the river as the flow leaves the mouth of the river...
(present day Wouri River
Wouri River
The Wouri is a river in Cameroon. The river is formed at the confluence of the rivers Nkam and Makombé, northeast of the city of Yabassi. The Wouri then flows about southeast to the Wouri estuary at Douala, the chief port and industrial city in the southwestern part of Cameroon on the Gulf of...
delta) was established in 1868 by the Hamburg trading company C. Woermann. The firm’s agent in Gabon
Gabon
Gabon , officially the Gabonese Republic is a state in west central Africa sharing borders with Equatorial Guinea to the northwest, Cameroon to the north, and with the Republic of the Congo curving around the east and south. The Gulf of Guinea, an arm of the Atlantic Ocean is to the west...
, Johannes Thormählen, expanded activities to the Kamerun River delta. In 1874, together with the Woermann agent in Liberia, Wilhelm Jantzen, the two merchants founded their own company, Jantzen & Thormählen
Jantzen & Thormählen
Jantzen & Thormählen was a German firm based on Hamburg that was established to exploit the resources of Cameroon. The firm's commercial and political influence was a major factor in the establishment of the colony of Kamerun in 1884.-Coastal trade:...
there.

Both of these West Africa houses expanded into shipping with their own sailing ships and steamers and inaugurated scheduled passenger and freight service between Hamburg
Hamburg
-History:The first historic name for the city was, according to Claudius Ptolemy's reports, Treva.But the city takes its modern name, Hamburg, from the first permanent building on the site, a castle whose construction was ordered by the Emperor Charlemagne in AD 808...
, Germany and Duala. These companies and others purchased extensive acreage from local chiefs and began systematic plantation
Plantation
A plantation is a long artificially established forest, farm or estate, where crops are grown for sale, often in distant markets rather than for local on-site consumption...
operations, including bananas.

By 1884, Adolph Woermann, representing all West African companies as their spokesman, petitioned the imperial foreign office for "protection" by the German Empire. Chancellor Otto von Bismarck
Otto von Bismarck
Otto Eduard Leopold, Prince of Bismarck, Duke of Lauenburg , simply known as Otto von Bismarck, was a Prussian-German statesman whose actions unified Germany, made it a major player in world affairs, and created a balance of power that kept Europe at peace after 1871.As Minister President of...
sought to utilize the traders on site in governing the region via "chartered companies". However, in response to Bismarck’s proposal the companies withdrew their petition.

At the core of the commercial interests was pursuit of profitable trading activities under the protection of the Reich, but these entities were determined to stay away from political engagements. Eventually Bismarck yielded to the Woermann position and instructed the admiralty to dispatch a gunboat
Gunboat
A gunboat is a naval watercraft designed for the express purpose of carrying one or more guns to bombard coastal targets, as opposed to those military craft designed for naval warfare, or for ferrying troops or supplies.-History:...
. As a show of German interest, the small gunboat SMS Möwe arrived in West Africa
West Africa
West Africa or Western Africa is the westernmost region of the African continent. Geopolitically, the UN definition of Western Africa includes the following 16 countries and an area of approximately 5 million square km:-Flags of West Africa:...
.

The protectorate of Kamerun was established during the period generally known as Europe’s imperialist "Scramble for Africa
Scramble for Africa
The Scramble for Africa, also known as the Race for Africa or Partition of Africa was a process of invasion, occupation, colonization and annexation of African territory by European powers during the New Imperialism period, between 1881 and World War I in 1914...
". The German explorer, medical doctor, imperial consul and commissioner for West Africa Gustav Nachtigal
Gustav Nachtigal
Gustav Nachtigal was a German explorer of Central and West Africa. He is further known as the German Empire's consul-general for Tunisia and Commissioner for West Africa. His mission as commissioner resulted in Togoland and Kamerun becoming the first colonies of a German colonial empire...
was the driving force toward the colony’s establishment. By then well over a dozen German companies, based in Hamburg and Bremen, conducted their trading and plantation activities in Kamerun.

With imperial treasury subsidies, the colony built two rail lines from the port city of Duala to bring agricultural products to market: the Northern line of 160 kilometres (99.4 mi) to the Manegua mountains, and the 300 kilometres (186.4 mi) long mainline to Makak on the river Nyong
Nyong River
The Nyong is a river in Cameroon. The river flows approximately 640 km to empty into the Gulf of Guinea.-Transport:The town of Mbalmayo, which has a railhead, lies on the north bank of this river. The towns of Akonolinga and Abong-Mbang also lie on it....
. An extensive postal and telegraph system and a river navigation network with government ships connected the coast to the interior.

The Kamerun protectorate was enlarged with Neukamerun
Neukamerun
Neukamerun was the name of Central African territories ceded by France to Germany in 1911. Upon taking office in 1907, Theodor Seitz, governor of German Kamerun, advocated the acquisition of territories from the French Congo...
(German: New Cameroon) in 1911 as part of the settlement of the Agadir Crisis
Agadir Crisis
The Agadir Crisis, also called the Second Moroccan Crisis, or the Panthersprung, was the international tension sparked by the deployment of the German gunboat Panther, to the Moroccan port of Agadir on July 1, 1911.-Background:...
, resolved by the Treaty of Fez
Treaty of Fez
By the Treaty of Fez , signed March 30, 1912, Sultan Abdelhafid gave up the sovereignty of Morocco to the French, making the country a protectorate, resolving the Agadir Crisis of July 1, 1911....
.

At the outbreak of World War I
World War I
World War I , which was predominantly called the World War or the Great War from its occurrence until 1939, and the First World War or World War I thereafter, was a major war centred in Europe that began on 28 July 1914 and lasted until 11 November 1918...
, French
France
The French Republic , The French Republic , The French Republic , (commonly known as France , is a unitary semi-presidential republic in Western Europe with several overseas territories and islands located on other continents and in the Indian, Pacific, and Atlantic oceans. Metropolitan France...
, Belgian and British
Great Britain
Great Britain or Britain is an island situated to the northwest of Continental Europe. It is the ninth largest island in the world, and the largest European island, as well as the largest of the British Isles...
troops invaded the German colony (1914–1916) and occupied it.

Following Germany's defeat, the Treaty of Versailles
Treaty of Versailles
The Treaty of Versailles was one of the peace treaties at the end of World War I. It ended the state of war between Germany and the Allied Powers. It was signed on 28 June 1919, exactly five years after the assassination of Archduke Franz Ferdinand. The other Central Powers on the German side of...
divided the territory into two League of Nations mandates (Class B) under the administration of Great Britain and France. French Cameroun
Cameroun
Cameroun was a French and British mandate territory in central Africa, now constituting the majority of the territory of the Republic of Cameroon....
and part of British Cameroons
Cameroons
British Cameroons was a British Mandate territory in West Africa, now divided between Nigeria and Cameroon.The area of present-day Cameroon was claimed by Germany as a protectorate during the "Scramble for Africa" at the end of the 19th century...
reunified in 1961 as Cameroon
Cameroon
Cameroon, officially the Republic of Cameroon , is a country in west Central Africa. It is bordered by Nigeria to the west; Chad to the northeast; the Central African Republic to the east; and Equatorial Guinea, Gabon, and the Republic of the Congo to the south. Cameroon's coastline lies on the...
. 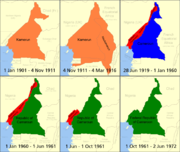