Encyclopedia
Königsplatz is a square in Munich
Munich
Munich The city's motto is "" . Before 2006, it was "Weltstadt mit Herz" . Its native name, , is derived from the Old High German Munichen, meaning "by the monks' place". The city's name derives from the monks of the Benedictine order who founded the city; hence the monk depicted on the city's coat...
, Germany
Germany
Germany , officially the Federal Republic of Germany , is a federal parliamentary republic in Europe. The country consists of 16 states while the capital and largest city is Berlin. Germany covers an area of 357,021 km2 and has a largely temperate seasonal climate...
.

Klenze framed the square with the "Ionic
Ionic order
The Ionic order forms one of the three orders or organizational systems of classical architecture, the other two canonic orders being the Doric and the Corinthian...
" Glyptothek
Glyptothek
The Glyptothek is a museum in Munich, Germany, which was commissioned by the Bavarian King Ludwig I to house his collection of Greek and Roman sculptures . It was designed by Leo von Klenze in the Neoclassical style, and built from 1816 to 1830...
and the "Doric
Doric order
The Doric order was one of the three orders or organizational systems of ancient Greek or classical architecture; the other two canonical orders were the Ionic and the Corinthian.-History:...
" Propylaea
Propylaea (Munich)
The Propylaea is a gate in Munich at the west side of Koenigsplatz.- History :The building constructed in Doric order was completed by Leo von Klenze in 1862 and evokes the monumental entrance of the Propylaea for the Athenian Acropolis...
(Propyläen; created as memorial for the accession of Otto of Greece
Otto of Greece
Otto, Prince of Bavaria, then Othon, King of Greece was made the first modern King of Greece in 1832 under the Convention of London, whereby Greece became a new independent kingdom under the protection of the Great Powers .The second son of the philhellene King Ludwig I of Bavaria, Otto ascended...
). The "Corinthian
Corinthian order
The Corinthian order is one of the three principal classical orders of ancient Greek and Roman architecture. The other two are the Doric and Ionic. When classical architecture was revived during the Renaissance, two more orders were added to the canon, the Tuscan order and the Composite order...
" State Museum of Classical Art was erected by Georg Friedich Ziebland, on its back St. Boniface's Abbey
St. Boniface's Abbey, Munich
St. Boniface's Abbey is a Benedictine monastery in Munich, Bavaria, Germany. It was founded in 1835 by King Ludwig I of Bavaria, as a part of his efforts to reanimate the country's spiritual life by the restoration of the monasteries destroyed during the secularisation of the early 19th century....
is situated.

The Lenbachhaus
Lenbachhaus
The Lenbachhaus in Munich houses an art museum and is part of Munich's "Kunstareal" .- The building :The Lenbachhaus was built as a Florentine-style villa for the painter Franz von Lenbach between 1887 and 1891 by Gabriel von Seidl...
is situated at the north-west side of the square.
The area around Königsplatz is today the home to the Kunstareal
Kunstareal
The Kunstareal is a museum quarter in the city centre of Munich, Germany.It consists of the three "Pinakotheken" galleries , the Glyptothek, the Staatliche Antikensammlung , the Lenbachhaus, the Museum Brandhorst and...
, Munich's gallery and museum quarter.


Königsplatz during the Third Reich 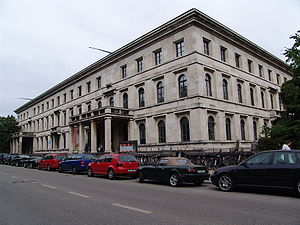 As a beautiful and monumental place, the Königplatz was used during the Third Reich as a field for the Nazi Party's mass rallies. The Brown House
Brown House, Munich, Germany
The Brown House was the national headquarters of the Nazi Party in Germany.A large impressive stone structure, it was located at 45 Brienner Straße in Munich, Bavaria...
, the national headquarters of the Nazi Party (Nationalsozialistische Deutsche Arbeiterpartei) in Germany
Germany
Germany , officially the Federal Republic of Germany , is a federal parliamentary republic in Europe. The country consists of 16 states while the capital and largest city is Berlin. Germany covers an area of 357,021 km2 and has a largely temperate seasonal climate...
was located at 45 Brienner Straße close to the square.

Two "Honor Temples" (Ehrentempel) were erected at the east side for the remains of the sixteen Nazis who died in the 1923 Beer Hall Putsch
Beer Hall Putsch
The Beer Hall Putsch was a failed attempt at revolution that occurred between the evening of 8 November and the early afternoon of 9 November 1923, when Nazi Party leader Adolf Hitler, Generalquartiermeister Erich Ludendorff, and other heads of the Kampfbund unsuccessfully tried to seize power...
. Both temples were demolished by the US-Army in 1947, although their platforms remain to this day. Two buildings of the Nazi party constructed by Paul Troost
Paul Troost
Paul Ludwig Troost , born in Elberfeld, was a German architect. An extremely tall, spare-looking, reserved Westphalian with a close-shaven head, Troost belonged to a school of architects, Peter Behrens and Walter Gropius who, even before 1914, reacted sharply against the highly ornamental...
next to the temples still exist; in one of them, the Führerbau, the Munich Agreement
Munich Agreement
The Munich Pact was an agreement permitting the Nazi German annexation of Czechoslovakia's Sudetenland. The Sudetenland were areas along Czech borders, mainly inhabited by ethnic Germans. The agreement was negotiated at a conference held in Munich, Germany, among the major powers of Europe without...
was signed in 1938. Today it is a school for music and theatre called the Hochschule für Musik und Theater München
Hochschule für Musik und Theater München
The Hochschule für Musik und Theater München is one of the most respected traditional vocational universities in Germany specialising in music and the performing arts. The seat of the Hochschule is the former Führerbau of the NSDAP, located at Arcisstraße 12, on the eastern side of the Königsplatz...
.

The start of construction for a Documentation Center educating visitors about Nazism at Königsplatz is planned for 2008.

Der Marsch zum Führer (English: The March to the Führer) is a Nazi propaganda film released in 1940. It depicts the nationwide march of Hitler Youth (HJ) to Nuremberg the HJ march through Königsplatz.