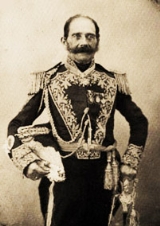 Encyclopedia
Grand Marshal Juan Gregorio de Las Heras (July 11, 1780 – February 15, 1866) was an Argentine
Argentina
Argentina , officially the Argentine Republic , is the second largest country in South America by land area, after Brazil. It is constituted as a federation of 23 provinces and an autonomous city, Buenos Aires...
soldier who took part in the Spanish American wars of independence and was also a governor of the province
Provinces of Argentina
Argentina is subdivided into twenty-three provinces and one autonomous city...
of Buenos Aires
Buenos Aires Province
The Province of Buenos Aires is the largest and most populous province of Argentina. It takes the name from the city of Buenos Aires, which used to be the provincial capital until it was federalized in 1880...
.

Las Heras was born in Buenos Aires
Buenos Aires
Buenos Aires is the capital and largest city of Argentina, and the second-largest metropolitan area in South America, after São Paulo. It is located on the western shore of the estuary of the Río de la Plata, on the southeastern coast of the South American continent...
, from a moderately wealthy family. He engaged in business till the age of twenty-six, when he enlisted in the army, taking part in the resistance against the British invasions of the Río de la Plata
British invasions of the Río de la Plata
The British invasions of the Río de la Plata were a series of unsuccessful British attempts to seize control of the Spanish colonies located around the La Plata Basin in South America . The invasions took place between 1806 and 1807, as part of the Napoleonic Wars, when Spain was an ally of...
(1806–1807). In 1808 he became sergeant of hussars. When the 1810 May Revolution
May Revolution
The May Revolution was a week-long series of events that took place from May 18 to 25, 1810, in Buenos Aires, capital of the Viceroyalty of the Río de la Plata, a Spanish colony that included roughly the territories of present-day Argentina, Bolivia, Paraguay and Uruguay...
took place, he acted with the patriots
Patriot (Spanish American Revolution)
Patriots was the name the peoples of the Spanish America, who rebelled against Spanish control during the Spanish American wars of independence, called themselves. They supported the principles of the Age of Enlightenment and sought to replace the existing governing structures with Juntas...
. He was appointed captain of militia in Córdoba
Córdoba, Argentina
Córdoba is a city located near the geographical center of Argentina, in the foothills of the Sierras Chicas on the Suquía River, about northwest of Buenos Aires. It is the capital of Córdoba Province. Córdoba is the second-largest city in Argentina after the federal capital Buenos Aires, with...
, and in 1812 he became commander of the garrison of that city. In 1813 he offered to accompany the auxiliary Argentine division sent to Chile
Chile
Chile ,officially the Republic of Chile , is a country in South America occupying a long, narrow coastal strip between the Andes mountains to the east and the Pacific Ocean to the west. It borders Peru to the north, Bolivia to the northeast, Argentina to the east, and the Drake Passage in the far...
, of which he became second in command. After the Battle of Cucha Cucha he attained the rank of colonel, and after the defeat of Rancagua (2 October 1814) he retired in good order and twice repulsed the enemy, returning to Mendoza
Mendoza, Argentina
Mendoza is the capital city of Mendoza Province, in Argentina. It is located in the northern-central part of the province, in a region of foothills and high plains, on the eastern side of the Andes. As of the , Mendoza's population was 110,993...
, where he employed himself in the organization of the Army of the Andes
Army of the Andes
The Army of the Andes was a military force created by the United Provinces of the Río de la Plata and mustered by general José de San Martín in his campaign to free Chile from the Spanish Empire...
.

On November 8, he was appointed as the first commander of the newly created 11th Line Infantry Regiment. Created at the proposal of General San Martín to the Government, during the organization of the Army of the Andes and using the Chilean Auxiliaries as the foundation. This was the same infantry corps that had been sent to Chile in 1812, commanded by then Lieutenant Colonel Las Heras to assist the Government Junta
Patria Vieja
Patria Vieja refers to a time period in the History of Chile occurring between the First Junta of the Government and the Disaster of Rancagua . This period was characterized by the transformation from a movement of temporary autonomy to one of total independence...
to face the invasion of the Royalists in Southern Chile. The Auxiliaries received their baptism of fire in the Battle of Cucha Cucha on February 23, 1814, and fought successfully for a second time in Membrillar on May 20. After the important Spanish victory in Rancagua in October, they were charged with covering the retreat of their Chilean comrades and their government to the city of Mendoza.

In 1815, the 11th Line had the first regimental band of the Army of the Andes, thanks to the economic support of Rafael Vargas, a rancher from Mendoza. When the Army moved to Chile in 1817, the regiment crossed the mountain range using the Uspallata pass, always commanded by Las Heras. After contributing to winning the Battle of Chacabuco
Battle of Chacabuco
The Battle of Chacabuco, fought during the Chilean War of Independence, occurred on February 12, 1817. The Army of the Andes of the United Provinces of the Río de la Plata led by General Captain José de San Martín defeated the Spanish force led by Rafael Maroto...
, he headed the South Division, that was involved in a night battle on April 4 in Curapaligüe and on May 5 in Gavilán, two resounding victories. It also took part in the failed assault on Talcahuano, December 6. On April 5, 1818, the 11th Line fought heroically in the Battle of Maipú
Battle of Maipú
The Battle of Maipú was a battle fought near Santiago, Chile on April 5, 1818 between South American rebels and Spanish royalists, during the Chilean War of Independence...
, which sealed the freedom of Chile. It was created once again in 1885 and sent to hold positions in the frontier of the territories occupied by wild Indians, such as Tapalqué, Olavarria and Tres Arroyos, in the Province of Buenos Aires. In 1910 the President of Argentina, José Figueroa Alcorta
José Figueroa Alcorta
José Figueroa Alcorta was President of Argentina from 12 March 1906 to 12 October 1910.Figueroa Alcorta was born in Córdoba as the son of José Figueroa and Teodosia Alcorta. He was elected a National Representative for Córdoba before becoming Provincial Governor in 1895. In 1898 he returned to the...
, issued a decree to rename it 11th Infantry Regiment "General Las Heras" in honor of its first commander. Currently, the 11th Mountain Infantry Regiment is headquartered in Tupungato, Province of Mendoza.

In 1817, Las Heras took charge of a part of the Army of the Andes
Army of the Andes
The Army of the Andes was a military force created by the United Provinces of the Río de la Plata and mustered by general José de San Martín in his campaign to free Chile from the Spanish Empire...
, replacing Antonio González de Balcarce
Antonio González de Balcarce
Antonio González de Balcarce was an Argentine military commander in the early 19th century.González de Balcarce was born in Buenos Aires. He joined the armed forces as a cadet in 1788. In the battle for Montevideo in 1807, he was captured by the British forces and taken to England...
. Leading one column by the pass of Uspallata
Uspallata
Uspallata is a village, and an administrative district, in Argentina in a scenic location on the road which crosses the Andes between Mendoza and Santiago in Chile. It is located west of Mendoza and was once served by the now disused Transandine Railway which passed through the town on its way...
, he commanded in the battles of Potrerillos
Potrerillos
Potrerillos may refer to:* Potrerillos, Cortés, a municipality in Honduras* Potrerillos, Mendoza, a touristic area in Mendoza Province, Argentina...
, Guardia, and Villa de los Andes. Together with the forces of General San Martin he took part in the Battle of Chacabuco
Battle of Chacabuco
The Battle of Chacabuco, fought during the Chilean War of Independence, occurred on February 12, 1817. The Army of the Andes of the United Provinces of the Río de la Plata led by General Captain José de San Martín defeated the Spanish force led by Rafael Maroto...
, (12 February 1817), and immediately afterward was sent to the south, where he gained the victories of Curapalihue
Battle of Curapalihue
The Battle of Curapalihue fought in Chile, was a minor encounter between South American rebels and Spanish royalists, during the South American wars of independence...
, Vegas de Talcahuano, and Oavihm, and was present at both of the sieges of Talcahuano under the orders of General Bernardo O'Higgins
Bernardo O'Higgins
Bernardo O'Higgins Riquelme was a Chilean independence leader who, together with José de San Martín, freed Chile from Spanish rule in the Chilean War of Independence. Although he was the second Supreme Director of Chile , he is considered one of Chile's founding fathers, as he was the first holder...
.

He also participated in the liberating expedition to Peru
Peru
Peru , officially the Republic of Peru , is a country in western South America. It is bordered on the north by Ecuador and Colombia, on the east by Brazil, on the southeast by Bolivia, on the south by Chile, and on the west by the Pacific Ocean....
. Transported by sea, the Regiment disembarked in Peru in September 1820, where it was involved in the battles of Nazca, Acarí and Jauja and in the siege and occupation of Lima on July 9, 1821, as well as in the surrender of the fort of El Callao on September 21. In 1824 the 11th Line was disbanded. In 1820 he was chief of staff of the liberating army of Peru, and in the same year was promoted to brigadier by the Argentine government, and general of division by the Chilean government. In Peru he had the command of the siege of the castles of Callao and received the title of Grand Marshal.

After his retirement from the Army in Peru, he went back to the Argentine Republic, where Las Heras was appointed governor of Buenos Aires by the Chamber of Representatives, succeeding General Martín Rodríguez in May, 1824. During his government the congress of the United Provinces of the Río de la Plata met on 16 December, 1824, and Las Heras signed an international treaty by which the Britain
United Kingdom
The United Kingdom of Great Britain and Northern IrelandIn the United Kingdom and Dependencies, other languages have been officially recognised as legitimate autochthonous languages under the European Charter for Regional or Minority Languages...
acknowledged the Argentine independence.

On the restoration of the confederation and the election of Bernardino Rivadavia
Bernardino Rivadavia
Bernardino de la Trinidad Gónzalez Rivadavia y Rivadavia was the first president of Argentina, from February 8, 1826 to July 7, 1827 . He was a politician of the United Provinces of Río de la Plata, Argentina today...
to the executive, Las Heras delivered the government to him on March 7, 1825, and in 1826 he returned to Chile. He was deprived of his rank on account of his participation in the Chilean Civil War of 1829, but the rank was restored by the Chilean Congress in 1842 and by the Argentine congress in 1855. From 1862 till the time of his death he was inspector-general of the Chilean Army
Chilean Army
The Chilean Army is the land arm of the Military of Chile. This 45,000-person army is organized into seven divisions, a special operations brigade and an air brigade....
. Las Heras died in Santiago
Santiago, Chile
Santiago , also known as Santiago de Chile, is the capital and largest city of Chile, and the center of its largest conurbation . It is located in the country's central valley, at an elevation of above mean sea level...
in 1866, at the age of 85.
The source of this article is wikipedia, the free encyclopedia.  The text of this article is licensed under the GFDL.