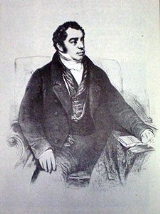 Encyclopedia
Bernardino de la Trinidad Gónzalez Rivadavia y Rivadavia (May 20, 1780 – September 2, 1845) was the first president
President
A president is a leader of an organization, company, trade union, university, or country.Etymologically, a president is one who presides, who sits in leadership...
of Argentina
Argentina
Argentina , officially the Argentine Republic , is the second largest country in South America by land area, after Brazil. It is constituted as a federation of 23 provinces and an autonomous city, Buenos Aires...
, from February 8, 1826 to July 7, 1827 (Buenos Aires, May 20, 1780 - Cadiz, September 2, 1845). He was a politician of the United Provinces of Río de la Plata, Argentina today. He was the first President of the United Provinces of Río de la Plata, to exercise that office between February 8, 1826 and July 7, 1827.

He was educated at the Royal College of San Carlos, but left without finishing his studies. During the British Invasions he served as Third Lieutenant of the Galicia Volunteers. Attended the open City Council on May 22, 1810 voting for the deposition of the viceroy. He had a strong influence on the First Triumvirate and shortly after he served as Minister of Government and Foreign Affairs of the Province of Buenos Aires.

Although there was a General Congress intended to draft a constitution, the beginning of the War with Brazil led to the immediate establishment of the office of President of Argentina; with Rivadavia being the first to be named to the post. Argentina's Constitution of 1826 was promulgated later, but was rejected by the provinces. Strongly contested by his political party, Rivadavia resigned and was succeeded by Vicente López y Planes.

Rivadavia resigned and retired to Spain, where he died in 1845. His remains were repatriated to Argentina in 1857, receiving honors as Captain General. Today his remains rest in a mausoleum located in Plaza Miserere, adjacent to Rivadavia Avenue, named after him.

Rivadavia was born in Buenos Aires
Buenos Aires
Buenos Aires is the capital and largest city of Argentina, and the second-largest metropolitan area in South America, after São Paulo. It is located on the western shore of the estuary of the Río de la Plata, on the southeastern coast of the South American continent...
in 1780. In 1809 he married Juana del Pino y Vera, daughter of the viceroy
Viceroy
A viceroy is a royal official who runs a country, colony, or province in the name of and as representative of the monarch. The term derives from the Latin prefix vice-, meaning "in the place of" and the French word roi, meaning king. A viceroy's province or larger territory is called a viceroyalty...
of the Río de la Plata
Río de la Plata
The Río de la Plata —sometimes rendered River Plate in British English and the Commonwealth, and occasionally rendered [La] Plata River in other English-speaking countries—is the river and estuary formed by the confluence of the Uruguay River and the Paraná River on the border between Argentina and...
, Joaquín del Pino
Joaquín del Pino
Joaquín del Pino Sánchez de Rojas Romero y Negrete , was a Spanish military engineer and politician, who held various positions in the South American colonial administration.-Early life:...
.

Rivadavia was active in both the Argentine resistance to the British invasion of 1806 and in the May Revolution
May Revolution
The May Revolution was a week-long series of events that took place from May 18 to 25, 1810, in Buenos Aires, capital of the Viceroyalty of the Río de la Plata, a Spanish colony that included roughly the territories of present-day Argentina, Bolivia, Paraguay and Uruguay...
movement for Argentine Independence
Argentine Declaration of Independence
What today is commonly referred as the Independence of Argentina was declared on July 9, 1816 by the Congress of Tucumán. In reality, the congressmen that were assembled in Tucumán declared the independence of the United Provinces of South America, which is still today one of the legal names of the...
in 1810. In 1811, Rivadavia became the dominating member of the governing triumvirate
Triumvirate
A triumvirate is a political regime dominated by three powerful individuals, each a triumvir . The arrangement can be formal or informal, and though the three are usually equal on paper, in reality this is rarely the case...
as Secretary of the Treasury and Secretary of War. Until its fall in October 1812, this government focused on creating a strong central government, moderating relations with Spain
Spain
Spain , officially the Kingdom of Spain languages]] under the European Charter for Regional or Minority Languages. In each of these, Spain's official name is as follows:;;;;;;), is a country and member state of the European Union located in southwestern Europe on the Iberian Peninsula...
, and organizing an army
Army
An army An army An army (from Latin arma "arms, weapons" via Old French armée, "armed" (feminine), in the broadest sense, is the land-based military of a nation or state. It may also include other branches of the military such as the air force via means of aviation corps...
.

Rivadavia was later sent to Europe to improve Argentine relations with Britain and Spain
Spain
Spain , officially the Kingdom of Spain languages]] under the European Charter for Regional or Minority Languages. In each of these, Spain's official name is as follows:;;;;;;), is a country and member state of the European Union located in southwestern Europe on the Iberian Peninsula...
. He returned six years later, in May 1821.

In June 1821, he was named minister of government to Buenos Aires governor Martín Rodríguez. Over the next five years, he exerted a strong influence, and focused heavily on improving Buenos Aires
Buenos Aires
Buenos Aires is the capital and largest city of Argentina, and the second-largest metropolitan area in South America, after São Paulo. It is located on the western shore of the estuary of the Río de la Plata, on the southeastern coast of the South American continent...
city, often at the expense of greater Argentina. To make the former look more European, Rivadavia constructed large avenues, schools, paved and lighted streets. He founded the University of Buenos Aires
University of Buenos Aires
The University of Buenos Aires is the largest university in Argentina and the largest university by enrollment in Latin America. Founded on August 12, 1821 in the city of Buenos Aires, it consists of 13 faculties, 6 hospitals, 10 museums and is linked to 4 high schools: Colegio Nacional de Buenos...
, as well as the Theater, Geology
Geology
Geology is the science comprising the study of solid Earth, the rocks of which it is composed, and the processes by which it evolves. Geology gives insight into the history of the Earth, as it provides the primary evidence for plate tectonics, the evolutionary history of life, and past climates...
, and Medicine
Medicine
Medicine is the science and art of healing. It encompasses a variety of health care practices evolved to maintain and restore health by the prevention and treatment of illness....
Academies and the continent's first museum of natural science
Bernardino Rivadavia Natural Sciences Museum
The Bernardino Rivadavia Natural Sciences Museum is a public museum located in the Caballito section of Buenos Aires, Argentina.-History and overview:...
.

He persuaded the legislature to authorize a one-million pound loan for public works that were never undertaken. The provincial bonds were sold in London through the Baring Brothers Bank, local and Buenos Aires-based British traders also acting as financial intermediaries. The borrowed money was in turn lent to these businessmen, who never repaid it. Of the original million pounds the Buenos Aires government received only £552,700. The province's foreign debt was transferred to the nation in 1825, its final repayment being made in 1904.

His government had many problems, primarily an ongoing war
Argentina-Brazil War
The Cisplatine War or the Argentine–Brazilian War was an armed conflict over an area known as Banda Oriental or "Eastern Shore" in the 1820s between the United Provinces of River Plate and the Empire of Brazil in the aftermath of the United Provinces' emancipation from Spain.-Background:Led by...
with Brazil
Brazil
Brazil , officially the Federative Republic of Brazil , is the largest country in South America. It is the world's fifth largest country, both by geographical area and by population with over 192 million people...
over territory in modern Uruguay
Uruguay
Uruguay ,officially the Oriental Republic of Uruguay,sometimes the Eastern Republic of Uruguay; ) is a country in the southeastern part of South America. It is home to some 3.5 million people, of whom 1.8 million live in the capital Montevideo and its metropolitan area...
and resistance from provincial authorities. Faced with the rising power of the Federalist Party and with several provinces in open revolt, Rivadavia submitted his resignation on June 29, 1827. He was succeeded by Vicente López y Planes
Vicente López y Planes
Alejandro Vicente López y Planes was an Argentine writer and politician who acted as interim President of Argentina from July 7, 1827 to August 18, 1827...
. At first he returned to private life, but fled to exile in Europe in 1829.

Rivadavia returned to Argentina in 1834 to confront his political enemies, but was immediately sentenced again to exile. He went first to Brazil and then to Spain, where he died September 2, 1845. He asked that his body would never be brought back to Buenos Aires.

Rivadavia is recognized as the first president of Argentina, even though his rule was accepted only in Buenos Aires, he did not complete a full mandate, there was no constitution for more than half of his rule, and did not start a presidential succesion line. The chair
Chair (official)
The chairman is the highest officer of an organized group such as a board, committee, or deliberative assembly. The person holding the office is typically elected or appointed by the members of the group. The chairman presides over meetings of the assembled group and conducts its business in an...
of the President of Argentina
President of Argentina
The President of the Argentine Nation , usually known as the President of Argentina, is the head of state of Argentina. Under the national Constitution, the President is also the chief executive of the federal government and Commander-in-Chief of the armed forces.Through Argentine history, the...
is known as the "chair of Rivadavia", but only metaphorically: Rivadavia took everything when he left office, including the chair, which could never be retrieved.

Liberal historians praise Rivadavia as a great historical man
Great man theory
The Great Man Theory was a popular 19th century idea according to which history can be largely explained by the impact of "great men", or heroes: highly influential individuals who, due to either their personal charisma, intelligence, wisdom, or Machiavellianism utilized their power in a way that...
, for his work improving education, culture and separation of church and state
Separation of church and state
The concept of the separation of church and state refers to the distance in the relationship between organized religion and the nation state....
. Revisionist authors condemn his Anglophilia, the weak customs barriers that allowed the entry of big British imports, harming the weak Argentine economy of the time, and the Baring Brothers loan that started the Argentine External debt
External debt
External debt is that part of the total debt in a country that is owed to creditors outside the country. The debtors can be the government, corporations or private households. The debt includes money owed to private commercial banks, other governments, or international financial institutions such...
.