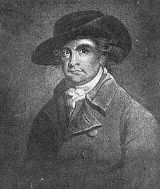 Encyclopedia
John Pond FRS  was a renowned English
England
England is a country that is part of the United Kingdom. It shares land borders with Scotland to the north and Wales to the west; the Irish Sea is to the north west, the Celtic Sea to the south west, with the North Sea to the east and the English Channel to the south separating it from continental...
astronomer
Astronomy
Astronomy is a natural science that deals with the study of celestial objects and phenomena that originate outside the atmosphere of Earth...
who became the sixth Astronomer Royal
Astronomer Royal
Astronomer Royal is a senior post in the Royal Household of the Sovereign of the United Kingdom. There are two officers, the senior being the Astronomer Royal dating from 22 June 1675; the second is the Astronomer Royal for Scotland dating from 1834....
, serving from 1811 to 1835.

Pond was born in London
London
London is the capital city of :England and the :United Kingdom, the largest metropolitan area in the United Kingdom, and the largest urban zone in the European Union by most measures. Located on the River Thames, London has been a major settlement for two millennia, its history going back to its...
and, although the year of his birth is known, the records indicating the day and month have been lost to posterity. Pond's father made a fortune as a London merchant, enabling young John to enter Trinity College, Cambridge
Trinity College, Cambridge
Trinity College is a constituent college of the University of Cambridge. Trinity has more members than any other college in Cambridge or Oxford, with around 700 undergraduates, 430 graduates, and over 170 Fellows...
in 1784 at the age of sixteen. He took no degree, however, as his course was being interrupted by severe pulmonary attacks which compelled a long residence abroad. He was admitted to the Inner Temple
Inner Temple
The Honourable Society of the Inner Temple, commonly known as Inner Temple, is one of the four Inns of Court in London. To be called to the Bar and practise as a barrister in England and Wales, an individual must belong to one of these Inns...
in 1794, but his poor health prompted him to withdraw.

In 1800 Pond settled at Westbury near Bristol
Bristol
Bristol is a city, unitary authority area and ceremonial county in South West England, with an estimated population of 433,100 for the unitary authority in 2009, and a surrounding Larger Urban Zone with an estimated 1,070,000 residents in 2007...
, and began to determine star-places with a fine altitude and azimuth circle of 2½ feet (750 mm) in diameter by Edward Troughton
Edward Troughton
Edward Troughton FRS was a British instrument maker who was notable for making telescopes and other astronomical instruments.Troughton was born at Corney, Cumberland...
. His demonstration in 1806 of a change of form in the Greenwich
Greenwich
Greenwich is a district of south London, England, located in the London Borough of Greenwich.Greenwich is best known for its maritime history and for giving its name to the Greenwich Meridian and Greenwich Mean Time...
mural quadrant
Quadrant
Quadrant may refer to:* A sector equal to one quarter of a circle, or half a semicircle, see Circular sector* The sectors of a two-dimensional cartesian coordinate system, see Cartesian coordinate system#Quadrants and octants...
led to the introduction of astronomical circles at the Royal Greenwich Observatory and to his own appointment as its head. He was elected a fellow of the Royal Society
Royal Society
The Royal Society of London for Improving Natural Knowledge, known simply as the Royal Society, is a learned society for science, and is possibly the oldest such society in existence. Founded in November 1660, it was granted a Royal Charter by King Charles II as the "Royal Society of London"...
on 26 February 1807. That same year he married and set up residence in London.

In 1811 Pond succeeded Nevil Maskelyne
Nevil Maskelyne
The Reverend Dr Nevil Maskelyne FRS was the fifth English Astronomer Royal. He held the office from 1765 to 1811.-Biography:...
as Astronomer Royal
Astronomer Royal
Astronomer Royal is a senior post in the Royal Household of the Sovereign of the United Kingdom. There are two officers, the senior being the Astronomer Royal dating from 22 June 1675; the second is the Astronomer Royal for Scotland dating from 1834....
. During an administration of nearly twenty-five years, he effected a reform of practical astronomy in England comparable to that brought about by Friedrich Bessel
Friedrich Bessel
-References:* John Frederick William Herschel, A brief notice of the life, researches, and discoveries of Friedrich Wilhelm Bessel, London: Barclay, 1847 -External links:...
in Germany
Germany
Germany , officially the Federal Republic of Germany , is a federal parliamentary republic in Europe. The country consists of 16 states while the capital and largest city is Berlin. Germany covers an area of 357,021 km2 and has a largely temperate seasonal climate...
. In 1821 he began to employ the method of observation by reflection and in 1825 devised means of combining two mural circles in the determination of the place of a single object, the one serving for direct and the other for reflected vision. Under his auspices the instrumental equipment at Greenwich was completely changed and the number of assistants increased from one to six. The superior accuracy of his determinations was attested by Seth Carlo Chandler
Seth Carlo Chandler
Seth Carlo Chandler, Jr. was an American astronomer.He was born in Boston, Massachusetts. During his last year in high school he performed mathematical computations for Benjamin Peirce, of the Harvard College Observatory.After graduating, he became the assistant of Benjamin A. Gould...
's 1894 discussion of them in the course of his researches into the variation of latitude. Between 1810 and 1824 he persistently controverted the reality of Ireland
Ireland
Ireland is an island to the northwest of continental Europe. It is the third-largest island in Europe and the twentieth-largest island on Earth...
's Astronomer Royal John Brinkley
John Brinkley (astronomer)
The Rt. Rev. John Mortimer Brinkley D.D. was the first Royal Astronomer of Ireland and later Bishop of Cloyne.-Early years:...
's imaginary star-parallaxes. During the 1829-31 period, he briefly served as Superintendent of the Nautical Almanac
Nautical Almanac
Nautical Almanac can refer to:* Nautical almanac - a publication describing the positions and movements of celestial bodies* American Ephemeris and Nautical Almanac - first published in 1852* U.S...
. Delicacy of health obliged his retirement in the autumn of 1835.

Among his honors were the Lalande Prize
Lalande Prize
The Lalande Prize was an award for scientific advances in astronomy, given from 1802 through 1970 by the French Academy of Sciences.The prize was named for, and endowed by, astronomer Jérôme Lalande in 1801...
, conferred in 1817 by the French Academy of Sciences
French Academy of Sciences
The French Academy of Sciences is a learned society, founded in 1666 by Louis XIV at the suggestion of Jean-Baptiste Colbert, to encourage and protect the spirit of French scientific research...
of which he was a corresponding member, and the Copley Medal
Copley Medal
The Copley Medal is an award given by the Royal Society of London for "outstanding achievements in research in any branch of science, and alternates between the physical sciences and the biological sciences"...
, presented in 1823. He published eight folio volumes of Greenwich Observations, translated Pierre-Simon Laplace
Pierre-Simon Laplace
Pierre-Simon, marquis de Laplace was a French mathematician and astronomer whose work was pivotal to the development of mathematical astronomy and statistics. He summarized and extended the work of his predecessors in his five volume Mécanique Céleste...
's Système du monde and contributed thirty-one papers to scientific collections. His 1833 catalogue of positions of 1112 stars was of great value and displayed an accuracy which had previously never been achieved.

As Astronomer Royal, Pond was responsible for a substantial modernisation of the Observatory at Greenwich, extending from equipment improvements to new working practices. Perhaps his most noticeable addition was the 1833 installation of the time ball
Time ball
A time ball is a large painted wooden or metal ball that drops at a predetermined time, principally to enable sailors to check their marine chronometers from their boats offshore...
on the roof of the Observatory. Arguably, the first public time signal in the UK, the occurs daily at 1:00 p.m. and was intended to aid mariners on the Thames to synchronise their marine chronometer
Marine chronometer
A marine chronometer is a clock that is precise and accurate enough to be used as a portable time standard; it can therefore be used to determine longitude by means of celestial navigation...
s.

John Pond died in Blackheath, London
Blackheath, London
Blackheath is a district of South London, England. It is named from the large open public grassland which separates it from Greenwich to the north and Lewisham to the west...
in the year of his 69th birthday and was buried beside and near fellow Astronomers Royal Edmond Halley
Edmond Halley
Edmond Halley FRS was an English astronomer, geophysicist, mathematician, meteorologist, and physicist who is best known for computing the orbit of the eponymous Halley's Comet. He was the second Astronomer Royal in Britain, following in the footsteps of John Flamsteed.-Biography and career:Halley...
and Nathaniel Bliss
Nathaniel Bliss
The Reverend Nathaniel Bliss was an English astronomer of the 18th century, serving as Britain's fourth Astronomer Royal between 1762 and 1764....
, respectively, in the churchyard of St Margaret's
St Margaret's, Lee
The parish church of St Margaret of Antioch, Lee, was built between 1839 and 1841 in a simple early Victorian style , replacing an older mediaeval church dating to around 1120...
in nearby Lee
Lee, London
Lee is a district of south London, England, located mostly in the London Borough of Lewisham and partly in the London Borough of Greenwich. The district lies to the east of Lewisham, one mile west of Eltham, and one mile south of Blackheath village...
.