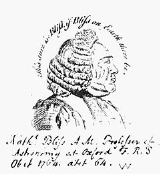 Encyclopedia
The Reverend Nathaniel Bliss (28 November 1700 – 2 September 1764) was an English
England
England is a country that is part of the United Kingdom. It shares land borders with Scotland to the north and Wales to the west; the Irish Sea is to the north west, the Celtic Sea to the south west, with the North Sea to the east and the English Channel to the south separating it from continental...
astronomer
Astronomy
Astronomy is a natural science that deals with the study of celestial objects and phenomena that originate outside the atmosphere of Earth...
of the 18th century, serving as Britain's fourth Astronomer Royal
Astronomer Royal
Astronomer Royal is a senior post in the Royal Household of the Sovereign of the United Kingdom. There are two officers, the senior being the Astronomer Royal dating from 22 June 1675; the second is the Astronomer Royal for Scotland dating from 1834....
between 1762 and 1764.

Bliss was born in the Cotswolds
Cotswolds
The Cotswolds are a range of hills in west-central England, sometimes called the Heart of England, an area across and long. The area has been designated as the Cotswold Area of Outstanding Natural Beauty...
village of Bisley
Bisley, Gloucestershire
Bisley is a village in Gloucestershire, England, approximately east of Stroud. The parish is today united administratively with the adjoining parish of Lypiatt and the two are usually referred to as Bisley-with-Lypiatt...
in Gloucestershire
Gloucestershire
Gloucestershire is a county in South West England. The county comprises part of the Cotswold Hills, part of the flat fertile valley of the River Severn, and the entire Forest of Dean....
and studied at Pembroke College, Oxford
Pembroke College, Oxford
Pembroke College is one of the constituent colleges of the University of Oxford in England, located in Pembroke Square. As of 2009, Pembroke had an estimated financial endowment of £44.9 million.-History:...
. He graduated B.A.
Bachelor of Arts
A Bachelor of Arts , from the Latin artium baccalaureus, is a bachelor's degree awarded for an undergraduate course or program in either the liberal arts, the sciences, or both...
in 1720 and M.A.
Master's degree
A master's is an academic degree granted to individuals who have undergone study demonstrating a mastery or high-order overview of a specific field of study or area of professional practice...
in 1723.

Rector of St Ebb's church in Oxford
Oxford
The city of Oxford is the county town of Oxfordshire, England. The city, made prominent by its medieval university, has a population of just under 165,000, with 153,900 living within the district boundary. It lies about 50 miles north-west of London. The rivers Cherwell and Thames run through...
, he succeeded Edmond Halley
Edmond Halley
Edmond Halley FRS was an English astronomer, geophysicist, mathematician, meteorologist, and physicist who is best known for computing the orbit of the eponymous Halley's Comet. He was the second Astronomer Royal in Britain, following in the footsteps of John Flamsteed.-Biography and career:Halley...
as professor of geometry at Oxford University in 1742 and was elected a Fellow of the Royal Society
Royal Society
The Royal Society of London for Improving Natural Knowledge, known simply as the Royal Society, is a learned society for science, and is possibly the oldest such society in existence. Founded in November 1660, it was granted a Royal Charter by King Charles II as the "Royal Society of London"...
the same year. He succeeded James Bradley
James Bradley
James Bradley FRS was an English astronomer and served as Astronomer Royal from 1742, succeeding Edmund Halley. He is best known for two fundamental discoveries in astronomy, the aberration of light , and the nutation of the Earth's axis...
to become the fourth Astronomer Royal in 1762, but held the post for too short a period to make a significant impact.

He died in Oxford, but was buried close to Halley in St Margaret's
St Margaret's, Lee
The parish church of St Margaret of Antioch, Lee, was built between 1839 and 1841 in a simple early Victorian style , replacing an older mediaeval church dating to around 1120...
churchyard in Lee
Lee, London
Lee is a district of south London, England, located mostly in the London Borough of Lewisham and partly in the London Borough of Greenwich. The district lies to the east of Lewisham, one mile west of Eltham, and one mile south of Blackheath village...
in south-east London
London
London is the capital city of :England and the :United Kingdom, the largest metropolitan area in the United Kingdom, and the largest urban zone in the European Union by most measures. Located on the River Thames, London has been a major settlement for two millennia, its history going back to its...
.